How many times have you waited on him to finally text you back or show up on time?

How many times have you made excuses for his behavior because you were convinced that he’s the one for you, even though you knew that something was just not right?

I feel you. I’ve done all of that a thousand times by now until I learned the real difference between a man who is just a passenger in my life and the one who is meant to stay.

Yes, it took me quite a while until I finally figured out the difference between a man who is not worthy of a second of my time and the one who deserves my full attention!

And do you know what the biggest distinction between the two is?

The biggest difference is that a man who wants to stay in your life will always find a way to make it happen!

A man who really wants to be in your life will make an effort to prove to you that he’s worthy of being with you.

A man who really wants to stay in your life will send you cute texts and make heartwarming, romantic gestures to remind you how much you mean to him.

A man who really wants to be with you will always work on making you smile instead of making you cry.

Everything else is only an excuse and nothing but an excuse!

A man who doesn’t deserve to be with you, who doesn’t know how to treat you with respect, and who’s only concerned with his ego will not bother with finding a way to stay in your life.

A man who only thinks about his own happiness will not make an effort to see you smile.

A man who only thinks about jumping into your pants won’t take the time to see how beautiful you truly are inside out.

A man who’s only interested in playing games with you will not care to treat you like a priority.

A man who’s not meant to stay in your life won’t do any of this because he doesn’t give a damn about how you really feel and he isn’t afraid of losing you.

He’s just an immature boy who still needs some growing up to do.

And this is where you come into the story.

I beg you to do me a favor and stop wasting your precious seconds on a man who is not worthy of being in your life.

Stop waiting for him to change.

Stop convincing yourself that you’ll never find anyone better or that you don’t deserve better!

He’ll do it – and not because you expect him to or because someone else said so.

He’ll do it because HE WANTS TO STAY in your life.

And a man who wants this will do all those little things that mean so much to you.

He’ll wake you up in the morning with a warm kiss on your cheek; he’ll make you a coffee (just the way you like it); he’ll hug you from behind when you least expect it!

He’ll listen to you when you have something to say, wipe your tears when you’re crying, laugh with you when you’re laughing, and lift you up every time you start to fall!

A man who wants to stay in your life will make sure to make you feel special and proud to say that you’re his and his only!

Everything else is just an excuse, a lie, and a waste of time.

And you certainly don’t deserve to be with a man who is just a passenger in your life and doesn’t know what love really means.

You deserve to be with a man who will tell you what he really means and how he really feels about you, a man who will sneak around at night if needed only to see your face for a few seconds, a man who won’t play any games out of respect for himself and the people around him.

You deserve a man whose words and actions match his pure heart.

You deserve a man who’ll never make you feel alone in a relationship – one who will always fight for you and stand up for you, no matter what!

You deserve a man who wants to stay in your life, so I beg you: Do me a favor and stop settling for those who are not and will never be prepared to stay.

Stop making excuses for those who aren’t even trying.

A man who really wants to stay in your life will always find a way.

A man who really wants to stay in your life will never make you question your decision to welcome him into your heart. 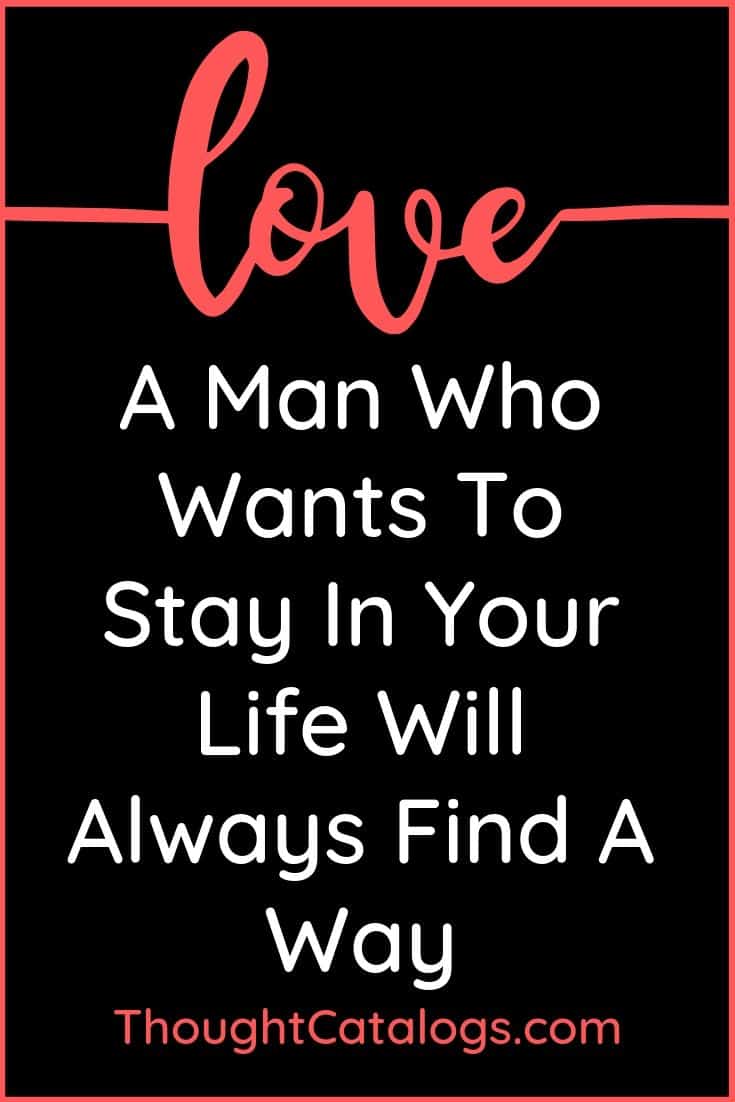 This Is How I Want You To Love Me