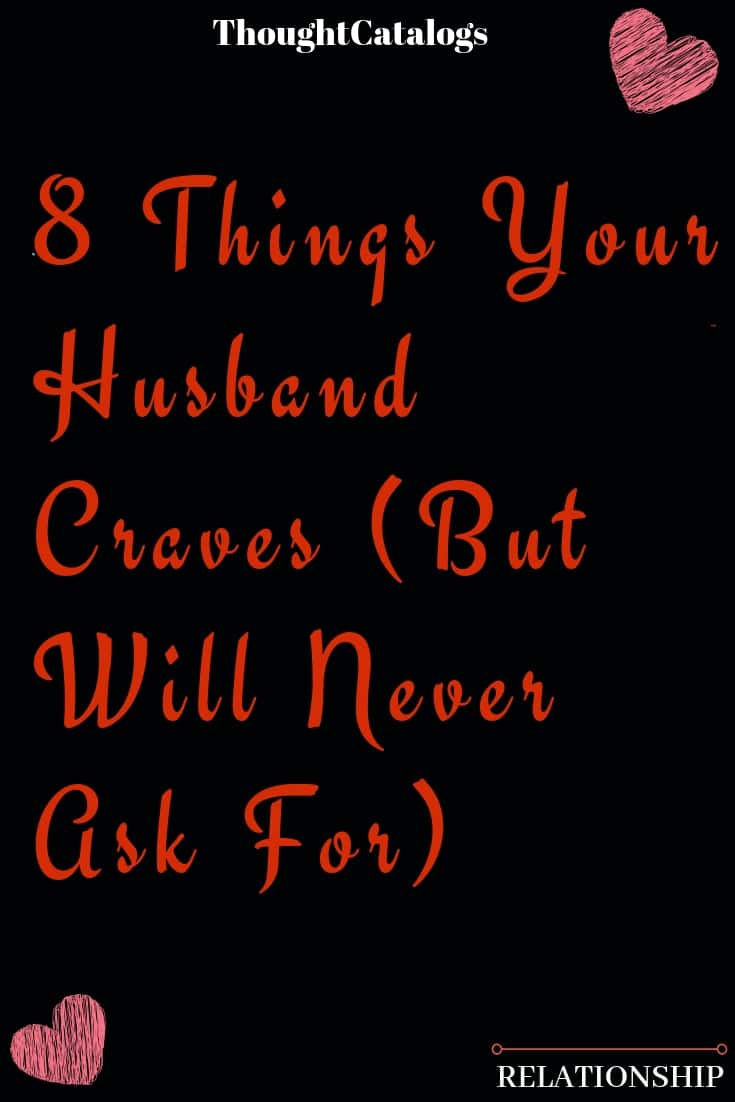 Guys are not like women. They don’t express their feelings and wishes so easily. So, if your guy really wants something from you and you don’t see it, he rather keep his mouth shut instead of mentioning anything to you.

But it is a fact that guys want some things from time to time, especially if you are in a long marriage. And here is the list of the things you can try to give to make your husband happy. And no problem, you’ll thank me later!

1. He wants your support

All husbands want the support of their wives because in that way, they feel appreciated. They feel they actually matter, and that brings peace and satisfaction to a relationship. So, if you want to make your guy happy, show him you support him.

Show him that you cherish everything he does for your family and that he is more than capable of taking care of you and the kids. He will feel like an alpha man, and his ego will be boosted. And trust me, your relationship will instantly get better!

2. He wants you to tell him you need him

Another important thing your husband wants but will never ask for is that you tell him that you need him. I am not saying that you should go around him telling how incapable and weak you are and that you need him to help you.

I am just saying you should tell him you are happy to have him in your life and that you cherish all that he does for you. Tell him that it is great to put your head on his shoulder at the end of a working day and feel peace. Show him that you feel good in his presence and that you don’t want to lose him.

3. He wants you to initiate s*x

Most of the time, guys are the ones who initiate s*x, but they would love if you could sometimes do it. In that way, they would feel desired, and it would boost their ego to know that you are interested in them in a s*xual way.

So, if you want to add some magic to your marriage, show your man that there is a fire inside you and that you can make him crazy with a couple of moves or teasing. That will bring the old spark back into your marriage and your husband will be more than satisfied with the relationship he has with you.

4. He wants his free time

Even if your husband loves you and enjoys spending time with you, he would cherish some time alone to focus on his hobbies. That’s why you need to give him his free time when he needs it just like he needs to give you your free time while he is taking care of the kids and the house.

That is not selfish; it is necessary. In that way, he won’t forget what drives him, and he will be more satisfied with his lifestyle. And I don’t need to even mention that this will project positively onto your relationship and your love life.

5. He wants you to be his best friend

One of the most important things your husband wants from you but will never ask for is that you to be his best buddy. He wants you to be the top person he will be able to rely on. Someone who will understand him even if he doesn’t understand himself.

He wants you to show him that you will always be there and that you will support all his calls no matter how crazy they might be. He wants you to be his partner in crime and to never judge him for his actions. In that way, he wants to bring your relationship to a whole new level and to show you that you are the most important person in his life.

6. He wants you to believe in him

Your husband wants you to actually believe in him and his capabilities. He needs to know that you feel safe with him and that you think that he can take care of you and your family. That’s why you should show him that you appreciate him and all he does for you.

Also, from time to time (if you feel okay with it) give him more control so he would feel better. Don’t let him sink or go down because he thinks he is not good enough. Show him that you believe he is capable of providing anything your family needs and that you can count on him for everything you need.

7. He wants you to compliment him

A man will never ask you to compliment him, but that doesn’t mean he doesn’t crave it. Just like you need some approval and compliments from time to time, so does your husband. So, show him that even after so many years of marriage, he still looks good.

Show him he is desirable and that you are still madly in love with him. That will mean the world to him, and he will feel good in his own skin. And when you think about it, it is just a small thing for you, but it will mean so much more to him. You see how small things can make us happy, right?

8. He wants some affection

While s*x is an essential part of every love relationship, your man would love you to show him some affection from time to time. Stop him while he is leaving the house and tell him that you love him. Hug him and kiss him innocently. Tell him you miss him. Show him you care.

All those are small things but in the end, they matter the most. Your husband will be more than happy for having someone like you in his life because you don’t focus only on his body but on the way he feels as well. And that is what is most important.

A Sneak Peek At What June 2020 Has In Store For You, Based On Your Zodiac Sign

This Is The March 2021 Tarot Horoscope For Each Zodiac Sign

Never Invest In Someone Who Isn’t Chasing You

I Did Everything I Could To Keep You But Even That...

ThoughtCatalogs - May 9, 2019 0
Whenever I think of you and everything that has happened between us, I wonder if there was something else I could have done to...