7 Reasons Why He Doesn’t Want To Get Emotionally Attached

The first thing you have to know is that you’re not alone. You’re not the first and you won’t be the last woman to encounter an emotionally unavailable man and get hurt.

Today, this is more and more frequent. Maybe it’s because the dating world has become too fast and too available. You can have literally anything you want in a short period of time.

Just take a look at Tinder and other dating apps. Dating has become meaningless and something to get over with.

That’s why men and women don’t appreciate dating anymore. We don’t even bother getting to know someone better. If he or she doesn’t work for us in the first hour or two, we move on because we know another one is just around the corner.

That’s why women and men are more and more emotionally unavailable. Opening your heart and letting go your vulnerability is just not worth the trouble.

Although we are all emotionally unavailable, some research shows that men are more prone to being emotionally insecure than women.

Why is that? Why is it that every guy you’re interested in doesn’t want to get emotionally attached?

He’s a bit selfish and the reason he can’t emotionally attach to you, or pretty much anyone, is because he loves himself too much and there is no love left for anyone else.

He is not evil, he doesn’t do it on purpose. He doesn’t want to hurt you intentionally. It’s just who he is. He has prioritized things in his life and he has put himself first, then a few spots are blank and then other things and people can be considered.

This is both good and bad. It’s good because rarely anyone can hurt him. If you don’t care for anyone, you can’t get hurt. But it’s bad because he’ll end up alone. He’ll get old and when he does, he’ll be sorry that he pushed everyone out of his life.He is a player

He stays emotionally detached from you because he is a player. He isn’t serious about you and that’s why he avoids committing. If you ask him to define what is going on between the two of you, he will avoid giving you the answer.

Men like him constantly send mixed messages. One day they are all over you, bringing you flowers and buying you candy, and the next day, they are nowhere to be seen or heard. If he is acting this way, the chances are he is a player who will never emotionally attach to you or anyone else.

Mature men know to say when they are sorry. They know that if they’ve made a mistake they have to answer for it and deal with the consequences.

But this guy acts completely the opposite. He acts like a child because he is a man-child. He doesn’t want to admit he is wrong because it’ll hurt his ego. A man like that can never get emotionally attached.

Because when you’re in a relationship, you have to make compromises and you have to admit when you’re wrong. That way you’re showing respect to your partner and you’re taking their feelings into consideration.

4. He is a perfectionist

He can’t get emotionally attached because there will always be something about you that won’t suit him. He wants you to act according to his rules, according to something he thinks is right. Anything other than that bothers him because he thinks it’s not perfect.

Nothing can ever be perfect but the thing is, he doesn’t understand that. He doesn’t get that his behavior is not perfect either and that everyone makes mistakes, including him. He can’t see that maybe he has done something that bothers you but you got past that because you’re a mature person.

5. The past bit him once before

He has been hurt before, in the past. He has had a relationship which failed and it affected him. He probably loved that girl but they were not meant to be together. He probably opened up to her and she hurt him.

Once you get hurt, it’s hard to start believing in love again. This is especially true when it comes to men. Getting dumped is the worst thing that can happen to their ego. If that happens, they promise themselves not to go through anything like that ever again.

The result is they close up inside and never get emotionally attached, even when they want to.

6. He had a difficult childhood

Our childhood shapes our future. We are a product of things that happened in our past. If your childhood was a happy one, you won’t be traumatized, you won’t have irrational subconscious fears.

But if you’ve been traumatized like he probably was, then you’ll struggle with that for the rest of your life.

He got emotionally hurt, or he lacked emotions when he was a kid and the result of this is that he refuses to emotionally attach or give anyone even the slightest chance of hurting him.

He will try to pull out of the relationship in the early stages just to see if you care enough to chase him and try to get him back. This is what his insecurity does to him.

His insecurity will make him test you how much you really like him and then he’ll start emotionally pulling back, leaving you to wonder if there was something you did wrong and if you chased him away.

But it was never you—from the beginning, it was always him and the fact that he doesn’t want to get emotionally attached. 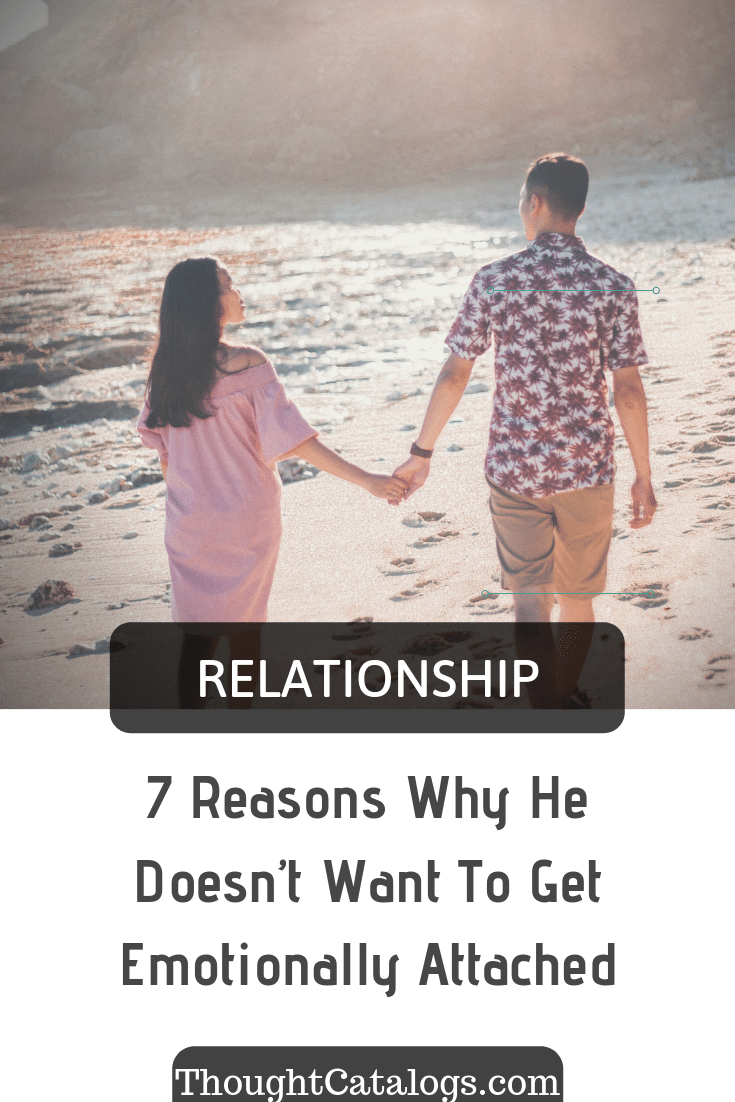 When my boyfriend and I first started dating, we spent one night eating pizza and asking questions about each other’s families. At one point,...

Anyone that has been in the dating world over the past decade can probably attest to some serious frustrations over what it truly means...

On Friday, it’s possible that you will start the day with problems or a bad mood from Tuesday. Whatever you experienced yesterday, it will depend on...

Click Here To Discover What Men Secretly Want, But They Could Never Tell You.   Aries (March 21 April 19) You are really going to struggle with...
𝐓𝐡𝐞 𝐭𝐡𝐨𝐮𝐠𝐡𝐭 𝐜𝐚𝐭𝐚𝐥𝐨𝐠𝐬 is an Educational & Entertainment Platform theme. Our Team Publishes 100+ Content On Weekend/Monthly. We will motivate the needs of any person & make them inspire instantly You, Will, admit Once You Begin Your Journey With Us. The Thought Catalogs platform is a perfect choice.
© Copyright © 2022 - All Rights Reserved | TheThoughtCatalogs.