Not all men are the same. Some of them will commit to one woman and live happily ever after.

Others, on the other hand, will chase other women even if they are in long-term relationships.

They will do anything to get the adrenaline pumping and feel alive again.

They simply don’t find what they need in one partner and they seek some sort of fun just to feel better about themselves.

Nowadays, many of them cheat on their partners virtually. Some say that it helps them run away from problems at home and that it is nothing serious.

Others go a step forward and start a real relationship with people they’ve met online. But whatever it is, it is bad.

Nobody deserves to be cheated on or to be taken advantage of. If you commit to one partner, you should stay faithful.

Because texting another girl when your partner falls asleep is also a form of cheating.

If you are hiding all those messages between the two of you, it means that your partner would get offended if she had to see them.

It would hurt her. So don’t do what you don’t want to be done to you.

If you are suspicious that your partner might be flirting online, check these signs and find out once and for all what his real intentions are.

1. He texts someone after you fall asleep

And girl, he is surely not texting his best friends at 11 p.m. Why does he never text anyone while you are with him? Why does he hide his phone when he sees you are waking up?

Why does he lie that he was checking the time on his mobile? All those are lies if you catch him doing this more than once.

That just means that he is waiting for you to go to bed so he can have night calls or texts with someone else.

I am not saying that he can’t text someone late at night sometimes, but if it happens every night, it is a red flag.

2. He hides his phone from you

Have you ever asked your boyfriend to give you his phone so you could call someone and he told a lie just to dodge it?

That is a huge red flag because you didn’t ask for something impossible.

You just wanted his phone to call someone. But if you saw that he got nervous after you asked him, just know that something is off there.

Someone who doesn’t hide anything would give you his phone, but he is probably hiding something and he doesn’t want you to see it.

3. He has passwords on all of his social media sites

Okay, so you are using a shared PC and while you don’t put any passwords on your social media accounts, he does it for some reason. Is there something he doesn’t want you to see?

Why would he type the password every time he wants to enter facebook if he doesn’t have anything to hide?

Sure, maybe some people do this out of habit, but if he never did it before and now he started, it’s worth investigating.

It is better to know the truth that might hurt than to live in denial that everything between the two of you is perfect.

4. He gets calls and messages from unknown numbers

If he often gets calls or messages from unknown numbers, you should ask who’s calling him.

If he says it was the wrong number every time, he’s likely lying through his teeth.

He has someone else and he’s keeping his options open. He doesn’t want to lose you, but having someone on the side is fun for him.

You will know if it’s true by just paying attention to his behavior after someone calls him.

5. He leaves the room when he talks on the phone

If he is flirting with someone else, he will definitely leave the room when that person calls him.

If he talks with his friends while you are there, but leaves the room when an unknown number calls, it is a sign that he is up to something.

And as soon as you find out what his plans are, you will be calmer. Maybe he just has some business calls that he doesn’t want you to hear.

But on the other hand, if you love your partner, you will trust them and you won’t have any need to hide anything from them.

6. You saw it with your own eyes

The easiest way to know for sure if he is flirting online is if you see all the texts he has sent to the other girl.

If he forgets to lock his phone and you need to send a message, and you see your man talking inappropriately to someone else, it is an undeniable sign that he’s cheating on you.

Even if he didn’t go further than sending messages, it still hurts.

You feel bad for treating him right, for loving him and supporting while he is looking for fun online.

Maybe he started neglecting your love life because he has someone else he likes better. It hurts, but it is better to find out about it sooner rather than later.

That would hurt even more.

But no matter how long you two are together, the only right thing you can do in a situation like this is to leave him and never see him again. 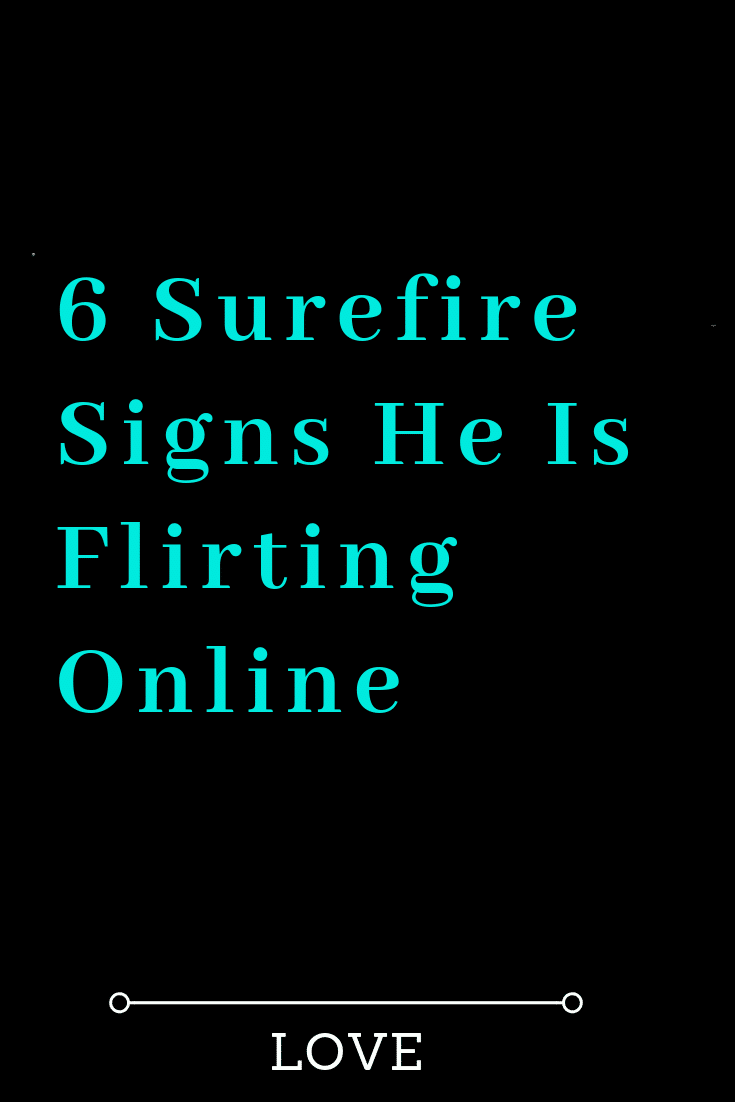