When I’m in love, I can’t really hide it, and I just want to scream it from the rooftops!

That’s just how love affects me. I can’t change it, and frankly, I don’t want to! But for some people, it’s completely different.

There are people who prefer to keep their love life on the DL. They don’t like people knowing their business, and what’s theirs is only for them.

They are hesitant to let anyone near their relationship, and their reasoning is not always all that clear.

While it makes sense to a certain degree, it can also be hurtful to the other partner, as it makes them feel like they’re unworthy or not good enough to be mentioned in their partner’s circle of friends.

What could be the reason why he’s keeping you on the DL?

Is it because he’s just not sure if it’s going to last or is he for some reason ashamed?

Does he simply like to keep you all to himself or does he have a completely different reason you can’t even fathom?

Well, there are a variety of reasons why men choose to keep their relationships on the DL.

Keep reading to find out if your man has somebody on the side or if he’s simply trying to keep you all to himself for selfish but romantic reasons!

1. One of his buddies might have a crush on you

This might be a legit reason why he’s not talking about you much. He is trying to deal with his buddy’s crush and avoid a potential disaster.

Crushes don’t have to mean much, and it doesn’t necessarily mean the guy has actual feelings for you.

But if he thinks you’re cute and gets anxious around you because he knows he shouldn’t like you, it’s kind of nice that your man is keeping things separated.

The crush probably won’t last long, they never do, and when it’s over, I’m sure he’ll be happy to have your relationship out in the open!

2. He’s just not that into you

I know this is painful to hear, but sometimes, you just have to face the music.

He likes you enough to keep seeing you but not enough to actually mention you as a part of his life.

Honestly, you shouldn’t put up with that. Either he’s into you or he’s not. There’s no grey area here.

If he’s not ready to proudly show you off to his friends and family, there is somebody out there who’ll be thrilled to do so.

It’s up to you to decide how you want to be treated.

3. He isn’t ready to define the relationship

He’s clear that he likes spending time with you, and he wants to keep doing it, but he just doesn’t want to label it.

There is always an excuse as to why that’s the case, and you keep falling for it.

Guys who know what they want go after it and don’t risk losing it. And guys who don’t, have a tendency to stall and make excuses to keep things casual and avoid commitment.

If you don’t like this arrangement, you should let him know.

You have the right to know exactly where you stand with him and if you’re just wasting your time.

If he doesn’t want to indulge you, then you know exactly where you stand.

4. He’s just using you until somebody better comes along

He has certain needs, and he needs them met. And you’re the perfect thing for that.

He probably checks out every hot piece of ass that walks by and doesn’t even hide his reaction when he sees something he likes.

He’s disrespectful, and his treatment of you is a low blow. You’re not just an object of his desire—you’re a human being with feelings!

My advice is leave him ASAP. You’re more than just a body to pass time with. Show him what he’s missing by leaving him looking better than ever.

He likes to flirt, and he likes the attention women give him.

And if he makes himself officially off the market, that means the attention stops, here’s nobody trying to win him over, and he just can’t have that.

This is a man with serious ego issues. He needs validation from multiple women in order to feel like a real man.

One woman clearly isn’t enough, but he still needs you to fulfil his  needs. He just needs to keep it on the DL.

He has you waiting for him any time he needs you for sex, and then he’s off to his pretend life where he plays a single dude dying to get the attention he craves.

Only it’s not fake, and he needs it to stroke his ego. That’s just messed up, and you need to leave this egomaniac like yesterday.

6. His friends are too judgmental

He has some seriously outspoken and opinionated friends, and he doesn’t want to let them talk badly about you.

It doesn’t have to mean that they actually would, but it’s very likely.

His friends’ opinions clearly matter a lot to him, and he can’t have them talk shit about you and then keep being torn between you and them.

So it’s easier keeping you as far away from each other as possible by keeping you on the DL.

While this isn’t the worst thing in the world on his part, it still sucks not being able to get to know his friends and be an actual part of his world.

Hiding is just childish and a total waste of time. You can choose how you want to handle this, but please put yourself first whatever you decide. 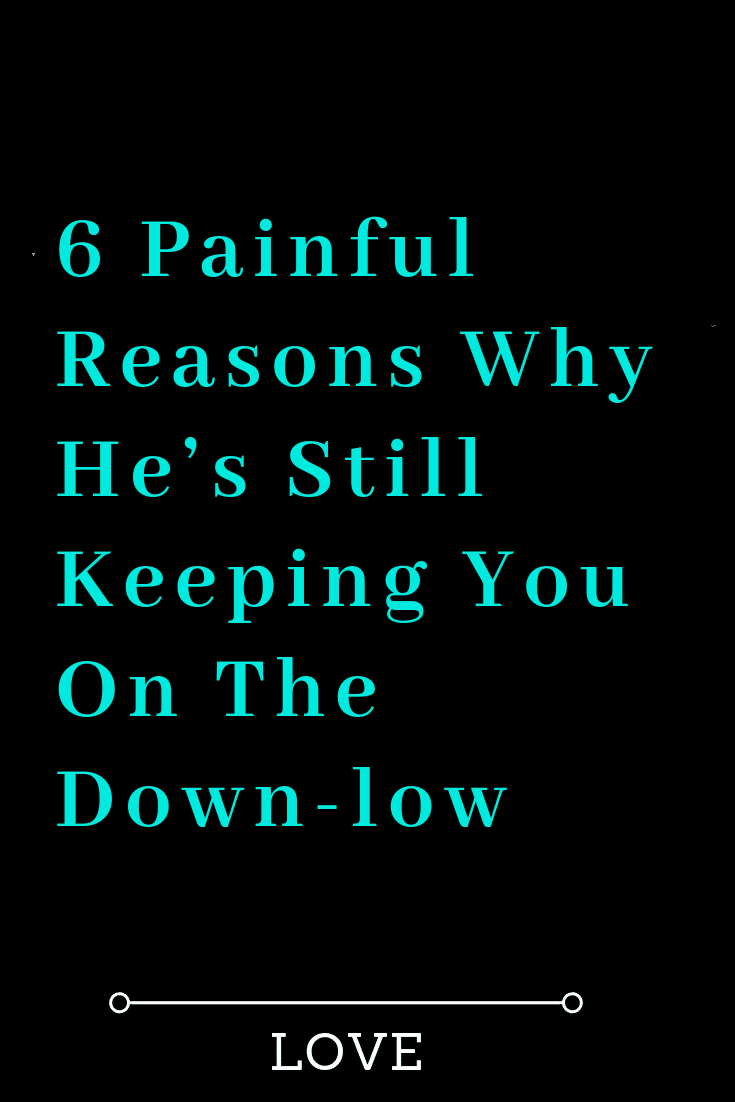 If He Hadn’t Broken Your Heart, You Wouldn’t Be Who You Are Now