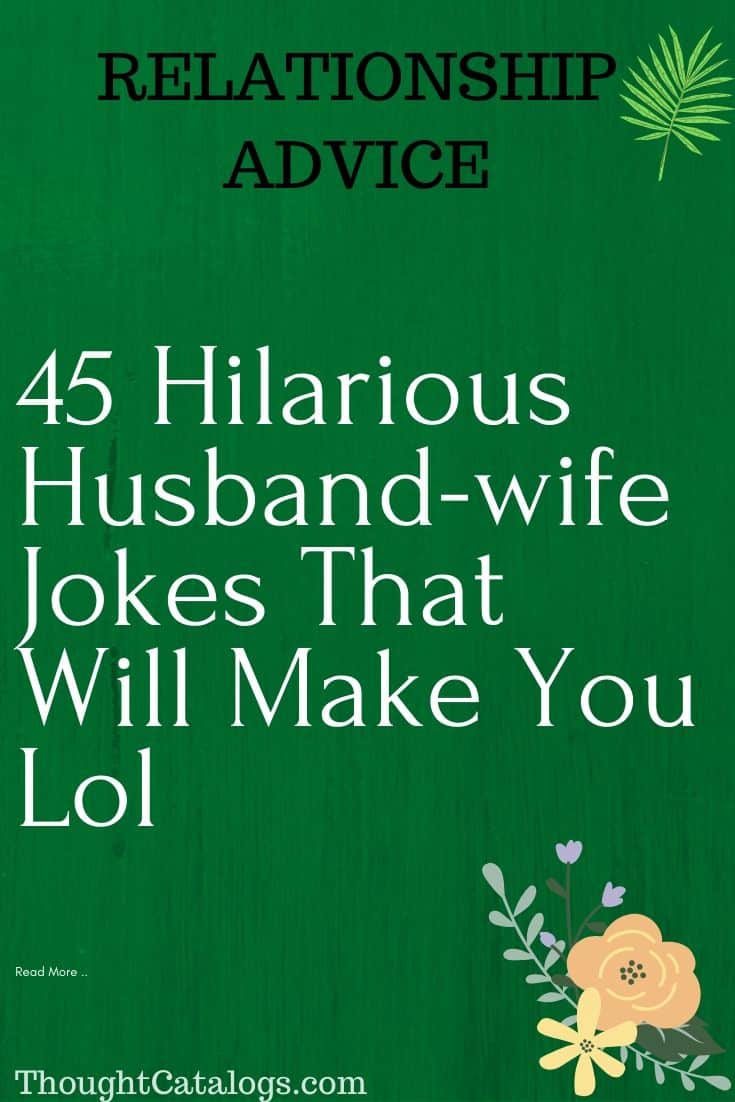 Welcome to the ultimate list of hilarious husband-wife jokes that will make you laugh out loud for days!

It’s true that marriage can be hard but it can also be hilarious!

All of you who are married have probably experienced plenty of difficult situations as well as hilarious ones that make marriage all the more exciting.

From annoying snoring or marriage fights to everyday funny circumstances, marriage is anything but boring!

It is an endless source of inspiration which is proven in the following funniest husband-wife jokes no one can stay indifferent to.

Regardless of whether it is a clean joke, a dirty joke or a short joke,

Lord knows that every good joke is worthy of every lost breath and stomach ache from laughing.

They make our life more colorful and serve as comic relief in difficult situations.

These funny jokes include marriage jokes, wedding jokes, anniversary jokes and other related wife and husband jokes that are simply hilarious!

So, instead of wasting time talking about it, let’s dive together into the humorous sea of husband-wife jokes and laugh out loud until we burst! Hooray!!

Boring husband: Honey, why are you wearing your wedding ring on the wrong finger?

Bored wife: Because I married the wrong man!

Wife: Dear, this computer is not working as per my command.

Husband: Exactly, darling! It’s a computer, not a husband!!

A husband and wife have four children. The oldest three are tall with blonde hair, the youngest is short with brown hair.

The husband is on his deathbed and says, “Honey, can you be completely honest with me? Is our youngest son mine?”

The wife says, “I swear to all that is holy, he is your son.”

Then the husband dies and the wife mutters, “Thank God he didn’t ask about the other three.”

A man placed an ‘ad’ in the classifieds: ‘Wife wanted.’

Next day, he received a hundred letters. They all said the same thing: ‘You can have mine.’

When I got home last night, my wife demanded that I take her someplace expensive.

So, I took her to a petrol pump.

And then the fight started…

What’s the difference between a bachelor and a married man?

A bachelor comes home, checks out what’s in the fridge and goes to bed.

A married man comes home, checks out what’s in the bed and goes to the fridge.

7. The Cost Of Being Married

A little boy asked his father, “Daddy, how much does it cost to get married?”

While playing in the backyard, little Johnny kills a honeybee.

His father sees him killing the honeybee and angrily says, “No honey for you for one month!”

Later that afternoon, Johnny’s dad catches him tearing the wings off a butterfly.

“That’s it! No butter for you for one month!” says his dad.

Later that evening as Johnny’s mother cooks dinner, a cockroach runs across the kitchen floor.

She jumps and stomps on it and then looks up to find little Johnny and her husband watching her.

Little Johnny looks at his father and says, “Are you going to tell her, Dad, or do you want me to?”

Q: How do I make my wife stop buying all these gloves?

A: Buy her a diamond ring.

A couple are sitting in their living room, sipping wine.

“Is that you or the wine talking?” asks the husband.

Honey, do you think I gained weight?

No, I think the living room got smaller.

Abner’s wife was lying on her deathbed.

She suddenly used all her strength to sit up and say to her husband, “I must tell you something or my soul will never know peace.

I have been unfaithful to you, Abner. In this very house, not one month ago.” “Hush, dear,” soothed Abner. “I know all about it.

Why else have I poisoned you?”

Newlyweds wake up one morning on their honeymoon and the man suggests: “Darling, why don’t you brew us some coffee?”

The wife looks confused. “But that’s your task, honey.”

“It’s all over the Bible, dearest.”

“The Bible says nothing about who’s supposed to be brewing coffee!”

A man and his wife have to go to the doctor. The doctor asks, “Do you share the same blood group?”

The husband replies, “We must by now. She’s been sucking my blood for years.”

We had some problems and after a while, decided to go for marriage counseling.

And despite my initial reservations, I must say we got some excellent advice, like I should treat my wife as I did when we started dating.

So last week, I took her to the cinema and then I dropped her off at her parents’!

A wife got so mad at her husband that she packed his bags and told him to get out.

As he walked to the door, she yelled, “I hope you die a long, slow, painful death.” He turned around and said, “So, you want me to stay?”

A husband and wife were dining at a 5-star restaurant. When their food arrived, the husband said, “Our food has arrived! Let’s eat!”

His wife reminded him, “Honey, you always say your prayers at home before your dinner!”

Her husband replied, “That’s at home, my dear. Here, the chef knows how to cook…”

Son: Dad, I’ve heard that in some parts of the world a man doesn’t know his wife until he marries her.

Every man wants a beautiful wife, a smart wife, a loving wife, a hot wife and a cooperative wife.

Sadly, bigamy is against the law.

A husband and wife were golfing when suddenly the wife asked, “Honey, if I died, would you get married again?”

The husband said, “No sweetie.”

The woman said, “I’m sure you would.”

Then the woman asked, “Would you let her sleep in our bed?”

And the man replied, “Yeah, I guess so.”

Then the wife asked, “Would you let her use my golf clubs?”

And the husband replied, “No, she’s left-handed.”

A wife goes on a retreat for work.

When she returns, she finds a pair of panties in her dresser that do not belong to her.

Furious, she questions her husband.

The husband says, “I have no idea where they came from. I don’t do the laundry!”

So, the wife goes to the maid and questions her.

Indignant, the maid replies, “Madam, how should I know? These panties don’t belong to me. I don’t even wear panties, just ask your husband!”

American scientists finally found out what a woman wants.

Unfortunately, she changed her mind since then.

Her: It’s our anniversary, dear. How do you suggest we celebrate it?

Him: With a minute of silence?

“Mommy, why are all the cars beeping their horns?”

“Because there’s a wedding going on.”

“But isn’t the horn a warning signal, Mommy?”

“Fancy that, Bob. I bought my wife an amazing white gold necklace with a platinum pendant and she didn’t speak to me for a month!”

“Nothing, that was part of the deal.”

Her: “All my friends are telling me I married an idiot!”

Him: “What they mean is, only an idiot would’ve married you!”

Arguing with the wife is a lot like trying to read the Terms of Use on the Internet.

Reading a letter at the breakfast table, a wife suddenly looked at her husband suspiciously.

“Henry, I’ve just received a letter from my mother saying she isn’t accepting our invitation to come and stay, as we don’t appear to want her.

What does she mean? I told you to write and say that she was to come at her own convenience. You did write, didn’t you?”

They’re hard to get started, emit foul odors and don’t work half the time.

Her: “Honey, I don’t like you with the new glasses on.”

Him: “But sweetheart, I don’t wear any glasses.”

A wife hangs up after about half an hour on the phone.

The husband is surprised. “Wow, that was quick. Usually you women are at it for two hours at least!”

A woman says, “I don’t know what he’s complaining about. I made him a millionaire!”

Her friend asks, “And what was he before?”

The woman says, “A billionaire.”

A man sits in a restaurant and cries. The waiter goes over and asks what happened.

The man replies: “My wife told me that she wouldn’t talk to me for a month.”

“No darling. I wanted to buy myself some make-up because I want to look pretty for you.”

“Sugar, that’s exactly why I wanted to buy those beers.”

My wife’s cooking is so bad, we usually pray after our food.

I think as marriages go, we’re doing absolutely awesome. I mean, I get to sleep with my wife nearly every day!

I got a call telling me my wife had been taken to hospital.

“What the heck is she complaining about again?!”

A 60-year-old millionaire is getting married and throws a big wedding reception.

His friends are quite jealous and in a quiet moment, one of them asks him how he landed such a hot 23-year-old beauty.

“Simple,” grins the millionaire. “I faked my age.”

His friends are really amazed and ask him how old he said he was.

Marriage is an institution of three rings. An engagement ring, a wedding ring and suffering.

My wife told me to go and get something that would make her look attractive. So I got drunk.

41. Definition Of An Optimist

Optimist. A man who leaves the engine running when his wife says she’s, “Just going to run inside the shop to grab a bottle of milk.”

A woman to her husband while they’re at it: “Please say dirty things to me!”

My wife and I had a very happy twenty years. After that, we met.

A robber robs a bank, gets all the money and is about to leave but before that, he asks a customer who’s lying on the floor, “Have you seen me rob this bank?”

“Yes, sir,” says the customer and promptly gets shot.

“Have you seen me rob this bank?” the robber asks another customer.

“Absolutely not, sir but my wife here saw everything!”

My son wanted to know what it’s like to be married. I told him to leave me alone and when he did, I asked him why he was ignoring me.

I don’t know about you but I’m still laughing my ass off at the above funny jokes on husbands and wives!

I hope they have made your day just like mine and in case you’re married, you can share them with your spouse and laugh together some more.

In case you’re not, you can still share them with your close friends and make the world a brighter place.

You know what they say: sharing is caring!

To conclude all the humor in the air (and so we can laugh some more), here’s one last funny quote about marriage:

‘Marriage is a relationship in which one person is always right and the other is the husband!’ – Unknown

These 4 Astrology Signs Were Born To Be Famous

Your Zodiac Reveals Why People Are Drawn to You

The Most Dangerous Zodiac Signs In 2022