However, leading someone on and giving them false hope is terrible. Telling the person who cares about you that you are not ready for a relationship right now and that things will eventually change is sneaky, mean, and leads to heartbreak.

Well, this is exactly what numerous guys have been doing lately. Instead of giving you the real reason why they don’t want to make things official, they use this corny phrase that leaves you wondering where you stand.

1. I don’t want to stay faithful

One of the first reasons most men say they don’t want to label things is actually pretty simple and it lies in their need to screw around.

When a guy tells you something like this, he actually wants to continue living his bachelor life and he wants to remain a fuckboy.

However, being in this kind of relation with you doesn’t put any obligation on him.

As much as you don’t want to hear it, the truth is that if he keeps things casual, he doesn’t have the duty of being faithful to you.

Instead, he has all the freedom of the world to flirt with other girls – to text, talk, or even sleep with them. In fact, in this arrangement, he is allowed to have another parallel relationship besides yours.

And you know what the worst part is? The fact that you can’t confront him about any of it.

After all, the two of you aren’t official and he has the right to do whatever the hell he wants.

2. I’m waiting for someone more convenient

Another meaning of the phrase “I’m not ready for a relationship” that is somehow brutal but doesn’t make it any less true.

I hate to be the one telling you this, but there is the possibility that this man is only keeping you as his backup plan, until a girl he thinks is better for him comes along.

Maybe he is hoping to get back with his ex or waiting for some girl who will meet his standards. The point is that he doesn’t see you as girlfriend material.

However, this doesn’t mean that you should question your worth just because he doesn’t see it. Instead of looking at this entire situation as something bad, observe it as his loss.

There are men who don’t have the capacity to love someone with their entire heart.

Men who can never commit to one woman completely, no matter the magnitude of emotions and sacrifice they receive from her.

If this is the case with your man, you need to know that there is nothing wrong with you.

It doesn’t mean that you should continue trying to break through his armor shield or put a little more effort into convincing him that true love exists.

He is simply emotionally unavailable and there is nothing you can do about it.

Besides, him telling you that he isn’t ready for a relationship NOW is nothing but a load of crap because a guy like this will never be ready for a committed, dedicated relationship.

Another group of men who will never have what it takes to build a healthy relationship are emotionally immature mama’s boys who refuse to grow up.

This type doesn’t have to necessarily be emotionally unavailable, he just wants to run away from every possible responsibility.

He’s telling you he doesn’t want a real relationship right now because he can’t man up and start acting like a grown ass man. He prefers living in an illusion that he is still young and has enough time to think about the future.

He thinks of a relationship as a cage that will limit his freedom and he doesn’t know how to be a part of a couple.

This guy doesn’t plan to marry or to start a family. Instead, he lives in the moment and you as his official girlfriend would just get in the way of his lifestyle. 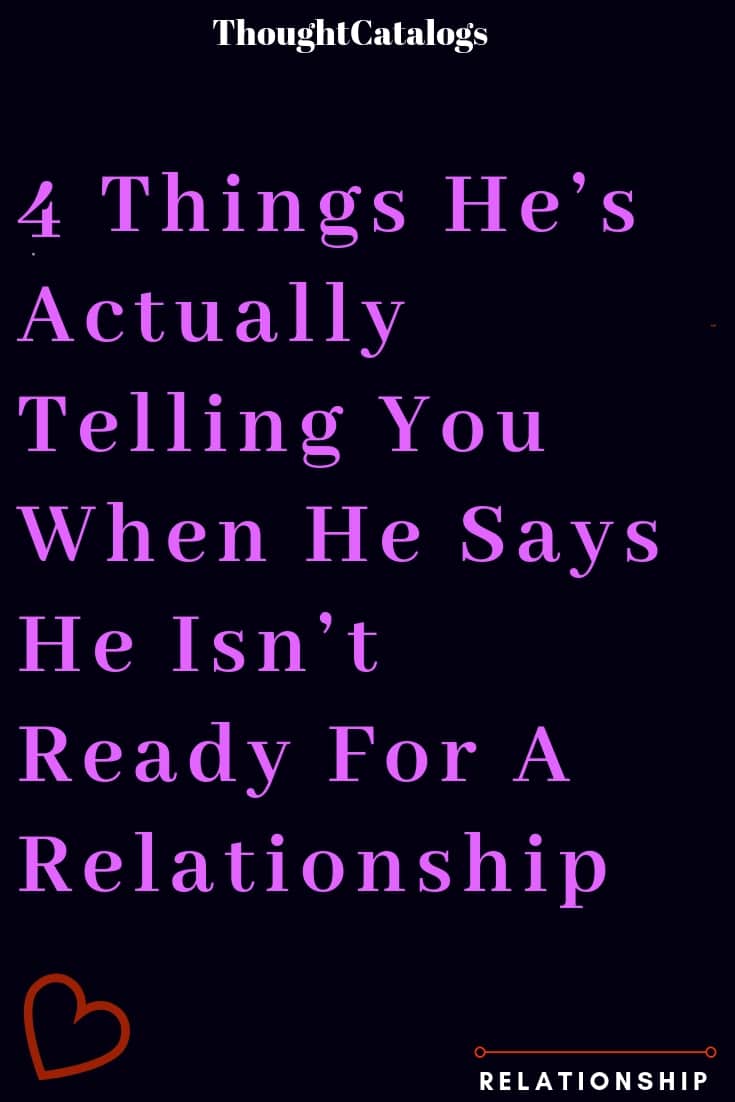 3 Things To Remember When Your Ex Moves On Before You