I met a guy who knocked me off my feet! He was caring, loving, and supportive. He was all that I was looking for in a man. He was the man of my dreams!

Unfortunately, after a couple of months, I found out that he is not that perfect. I realized that he has issues, and those issues were making a living hell out of our relationship.

Sadly, I was loving a broken man.

I never thought that I would meet someone who would be emotionally unavailable and broken. I thought something nice will happen to me because I deserved it. I still don’t understand why God sent him to me. Maybe that was His way to teach me a lesson. Maybe I was supposed to save my man. From his darkest secrets, from a life in agony and depression, from coldness.

The thing is that at the beginning, you actually don’t get it when someone is broken. Those people act just everyone else. They tell jokes, laugh, and enjoy their lives. But the real them arises when they stay alone. In those moments they don’t need to pretend that they are someone else. Those moments are there to show them what they’ve transformed into. And nobody sees what happens except the 4 walls of their rooms. In this case, I saw what it feels like to be broken.

I saw many signs of a broken man, and I couldn’t just ignore them.

Today, I want to share them with all of you who are struggling to love a damaged man. So, listen to me carefully.

1. He has trauma from his past

A broken man will never talk much about his past life. The thing is that those people have problems trusting strangers, so you will have to earn his trust and respect to actually make him open his heart to you.

The reason your man is broken is because he has some trauma from his past. It can be child abuse, losing parents, or having difficulties getting over cheating. All those things made scars on his heart, and he is struggling to get over it.

2. He compares himself to others

For some reason your man thinks that he is not good enough for you. He will constantly compare himself to others. He will even want to let you go to find a better man than him. This is a sign of a severely damaged man!

He doesn’t think his life is valuable, and he doesn’t have any self-esteem. If you want to keep him, teach him how to love. Tell him that you need him and that his past life is not as meaningful as he thinks. With a loved one, it is easier to cope with life problems.

The most obvious sign of a broken man is that he will never let you come near. He has problems letting new people into his life. There were so many of them who hurt him, and earning his trust can be a mission impossible.

It is up to you if you want to stick to a man like this. But whatever you decide, bear in mind that he is capable of loving—he just does it differently. If you try hard to win him over, maybe he will make you the happiest woman on earth.

Every broken man is anxious. Period. That is something that will follow him until he dies. He will always have that dose of caution because he went through so much shit in his life. He was hurt, and he won’t forget that.

Now, he just wants to prevent being hurt again. That’s why he will act so anxious when he meets new people. The thing is he just needs to bring back that faith in life and people again, and let others make his life richer.

Of course he will be depressed—someone hurt him, and now he needs to recover from that. He needs to find a way to heal a broken heart. He needs to feel alive again. He needs to trust people and let them come near. Otherwise, his life won’t make any sense.

We are all social human beings and the fact is that we can’t function without people in our lives. If your man has these signs, be there for him. Go step by step to show him that after all, life can be beautiful. You just need to let some things go.

6. He feels better off alone

A sign of a broken man is that he will rather choose to be alone than in a crowd of people. He has that scenario in his head about people who hurt him, and it is very difficult to get on the track again.

Loving a man like this can be tough but if your feelings are sincere, there is nothing that can stop you getting the best out of him. You just need to be patient, and things will work in your favor, and in his, of course.

Taking alcohol is a good way to shake the stress away. This is something a broken man knows very well. He spent so many sleepless nights with a bottle of Jack in his hands thinking of people who hurt him, thinking about the woman who left him.

What you can do in a situation like this is to talk to him. Tell him that if he drinks alcohol, his problems won’t vanish. They will be even bigger when he wakes up with the next morning’s hangover. Tell him that it is okay to start from scratch because that is something we all do.

And most important, tell him that you will be there no matter what happens to give him a hand of salvation and to be his support in any rough days that will come.

8. He lost his friends

When a man is broken, he won’t feel like hanging out with his friends. This is one of the most important symptoms of a broken heart. By doing this, he is sending a message to the world. He wants us to know that he feels better alone and that he needs some time to arrange things in his head.

And what you need to do in this situation is to let him go. Give him time to heal completely. Show him that you care enough to wait for him. I am not saying it will be easy, but at least you will know that one man was depending on you and that you saved him from the demons inside him.

Let’s face it—he just met you, and he thinks you are the same as the others. You can forget about him going an extra mile to make you happy. He has been hurt, and the only person he wants to see happy is actually him. This is something which has to be earned.

A broken man won’t give you more than one shot. Even this is too much for him. So, don’t do stupid things and don’t fuck up all up. Be yourself and teach him how you function. Maybe the two of you have a lot in common, but you just need to find it out. Don’t be harsh on him because he feels this way. He would want to be different but he can’t. He is still learning how to love the new him. And he would appreciate it so much if you could be his biggest support in his life journey.

Being a broken man is not a bad thing. That only means that a man like that went through more things than the others. And what he craves the most is a woman who will show him that after it all, he can be the old him—the UNBREAKABLE ONE! 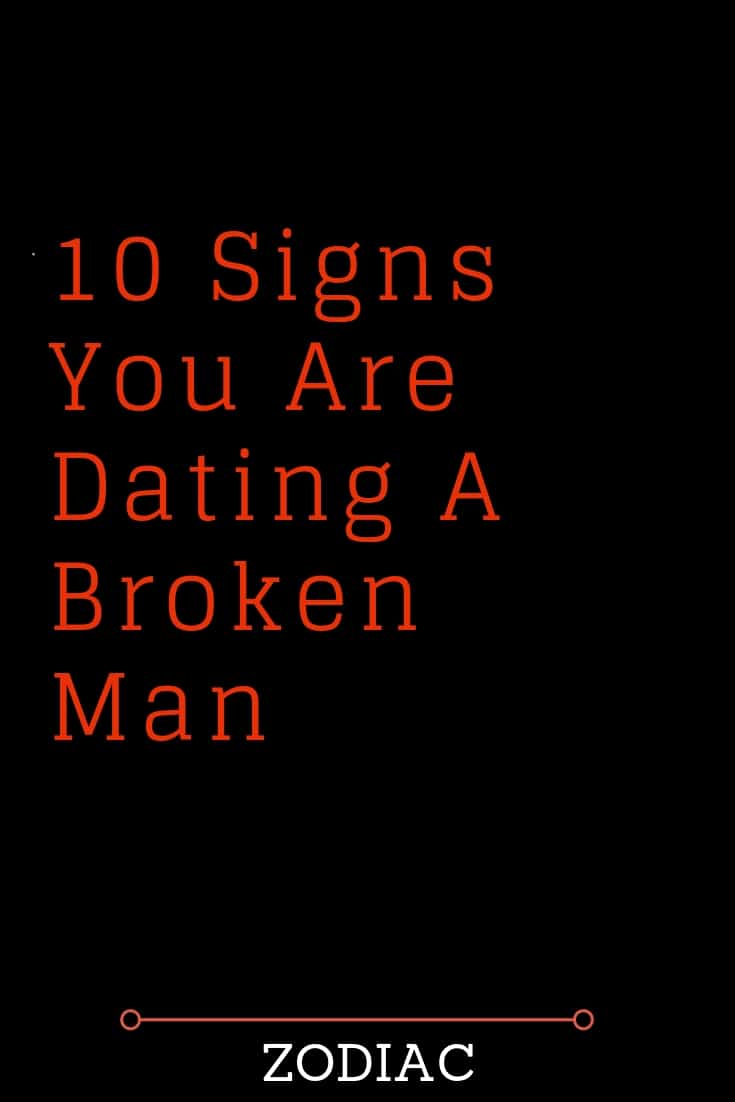 Love Is Like A Lost Fart. If You Have To Force It, It’s Probably Shit

Why Do You Keep Attracting Weird Guys?