Isn’t it awesome what a woman can endure?

She can forgive you everything and sometimes even forget but that doesn’t mean that she doesn’t respect herself.

Every woman knows her limits and you won’t even have the time to turn around before she’s gone. Forever.

So be careful, as a strong woman might leave you for the following reasons:

Where’s the fun in a relationship if you’re constantly arguing?

More importantly, there will be no fun and no relationship if you insult your girl.

She might have been cool, calm and collected while you’ve been arguing but that doesn’t mean she’ll tolerate disrespect and insults!

The moment a strong woman sees that you’re trying to manipulate her into doing something that she doesn’t want to do, she’ll move on with her life.

She won’t stand for manipulators who don’t have anything other to do than drain the life force out of people who seem to be much weaker than them.

It’s as bad as it sounds. Emotional terrorism is when your partner constantly belittles you, no matter whether you’re in public or alone.

Somehow, you never seem to be good enough for them. Well it doesn’t feel nice, does it?

If you constantly call your partner out to be the ‘crazy’ one or if you bring up past issues, be ready because she’ll leave you like no other! A strong woman can’t stand a-holes like you.

Why do people have the urge to lie? What possible reason can be good enough to explain your lies?

Don’t you dare lie to a woman who’s been through so much in her life, because she’s already had enough of it! Be honest!

Whatever you do while you are together, be honest about it. At least she’ll respect you for that.

If you really want her in your life, be ready to give up on all those other women.

She won’t tolerate you even looking at other women, because that’s insulting and she’s better off without you.

How amazing would this world be if we all tried to outdo each other with kindness, right?

If you’re being rude to the people around you, to the waiter, to animals, she’ll be gone in no time.

A strong woman wants a man in her life who can find the strength to be kind and generous to anyone and anything.

This one is kind of obvious but I see a lot of men out there who still don’t get it.

A woman should be loved and cared for but NEVER touched in an insulting manner, or God forbid, hit.

Keep your dirty hands off of her, because you don’t deserve to touch any woman ever again.

8. You don’t support her

Let me tell you this, a strong woman knows that she can do anything that she has set her mind to, so don’t come around telling her that she isn’t able to achieve her dreams—because she is!

And you will be sorry you ever said anything against her achieving her goals.

She doesn’t want someone to bring her down constantly, she wants someone who will be supportive and kind.

The only thing you should be addicted to in a relationship with a strong woman is her. If you tend to come home drunk in the middle of the night or, even worse, on drugs, she won’t think twice about leaving you.

She doesn’t want to be with someone who can’t get his life together. And if you’re gambling, you better believe she won’t give you the money to pay your loans. You’re on your own.

10. You get between her and her friends

Sisters before misters. Always was and always will be.

Don’t even bother to say insulting things about her best friend because she will discard you before you even get a chance to do so.

She loves her friends because they are her biggest support system, that’s why you need to respect them. 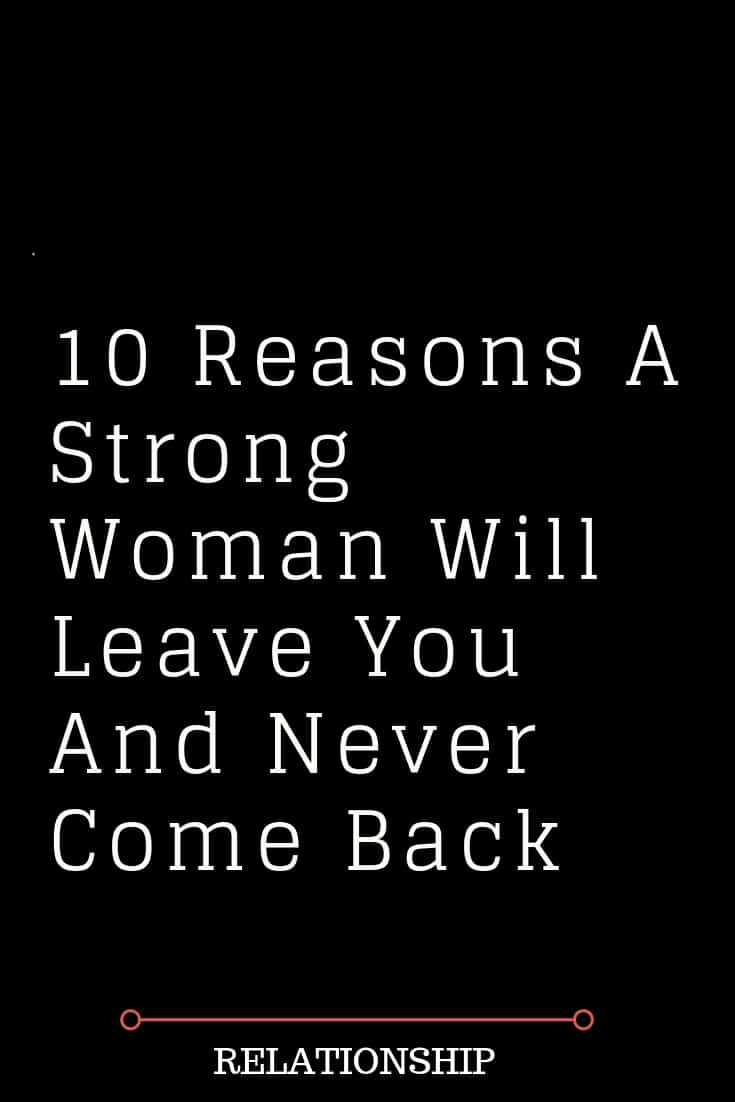 8 Reasons Why Women Shouldn’t Play Hard To Get

9 Signs He’s About To Get On One Knee