You are but a tender little sparrow who sees the good in people even when there’s no good to see. You are like God in that you forgive everyone who asks, no matter how undeserving of forgiveness they are. You look for the good in others, even when it’s almost impossible to find. Some would see you as gullible. You just see yourself as nice.

Because of your kind and trusting nature, people are a little less likely to betray you. People reveal their deepest, darkest secrets to you because based on instincts alone, they can tell you wouldn’t whisper anything to a soul. You realize that carrying around hate in your heart is like drinking poison and expecting your enemy to die.

You bring out the best in people because you trust them. You take people at their word. You trust them until the point where they give you a reason not to trust them. And if someone does you wrong, you don’t see that as a reason to mistrust everyone—only the person who lied to you.

Since you are generally honorable and trustworthy, you expect the same of others. There’s only one exception: If money is involved, you tend not to trust people. You’re the type who will make the bank teller count the money three times before accepting it.

You take it on a case-by-case basis. You have good instincts regarding who’s trustworthy and who isn’t. You tend to trust people in authority—doctors, lawyers, and politicians—while you’re very suspicious of any self-proclaimed “experts” who don’t have an official title.

You take people at their word because you expect everyone to be as honorable as you are. And you’re always surprised when they turn out to be double-crossing, no-good, backstabbing liars. In general, you tend to trust women more than men, and who can blame you?

Your parents? You trust them. Your friends? You trust them, too. You even trust politicians and reporters. But you can’t bring yourself to trust lovers ever since the love of your life broke your heart by cheating. You swore to yourself that you would never put yourself through that kind of heartache again. So you’re trusting in everything except matters of the heart, where your trust has been shattered.

If someone lies to you—even once—you will never trust them again. And it’s not so much that they lied as that they proved themselves untrustworthy. In other words, you are trusting up until the point that someone breaks that unspoken bond. And each time someone lies to you, you trust the entire world just a little bit less.

You don’t trust anyone to keep secrets—not since your best friend in school revealed your deepest secret to everyone. Otherwise, you trust the valet guy not to take your car keys and drive off with your car. You trust the bank clerk to count your cash correctly. You trust the waiter not to spit in your food after you complain that the noodles were undercooked. You even trust the IRS to give you that refund. The IRS?!?

You’ve been burned too many times to just blindly and naively trust people. You don’t accept their alibi that they “didn’t mean it.” Of course they meant it. They’re just sorry they got caught. You don’t take people at their word and are always searching for the hidden context. This, of course, limits your social and romantic possibilities, but you’d rather be lonely than feel betrayed.

Because of your suspicious nature, people always feel like they’re tiptoeing around you. You don’t realize that when you act suspicious, people are going to act shadier in response—the way they see it, if you aren’t going to trust them, anyway, why be trustworthy? If you’re going to accuse them of being a thief, why not steal? If you’re going to accuse them of infidelity, why not cheat? So it’s a vicious cycle—the less you trust them, the more likely they are to sneak around behind your back.

There’s nothing you hate more than a liar—and to you, almost everyone is a liar. To you, there are two types of people in the world—liars and really bad liars. You see how easily people will lie in order to be accepted rather than be disliked. You see trusting people as naïve or even childish. People have to earn your trust, and it may take a lifetime. Others would call you paranoid; you just see yourself as realistic. 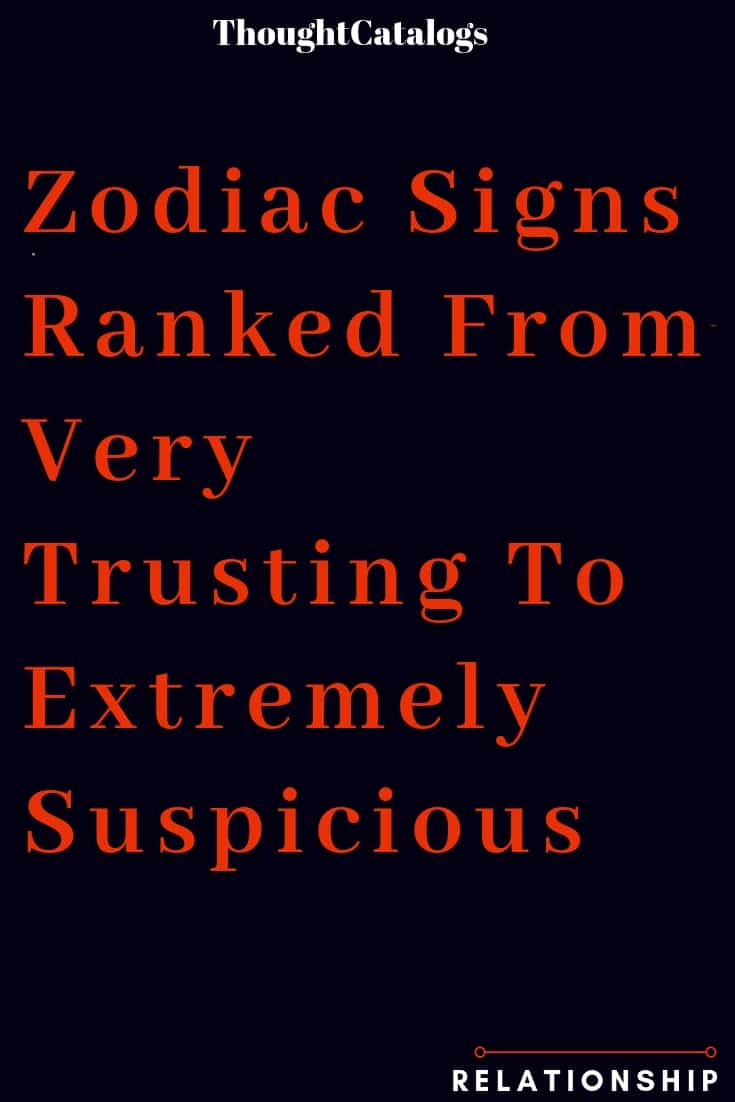 Wait For It, Love Will Find You Some Day