Facebook Twitter LinkedIn Tumblr Pinterest Reddit VKontakte Odnoklassniki
“Before you diagnose yourself with depression or low self-esteem, first make sure you are not, in fact, just surrounded by assholes.” – William Gibson Before you start beating yourself down one more time and getting distant from the world because the pain you feel inside demands it to be so, breathe in and take a pause. It’s not really you, it’s just the way you perceived it. It’s not you, it’s your depression. And depression is there because you allowed too many assholes to touch your soul. Depression makes you wanna cry even in your happiest moments. It brings you nostalgia for times you are not even sure existed. It makes you feel not good enough and it tells you that you don’t belong among those happy people. You don’t deserve to be with them in the same room. See also: 8 Things You’re Doing Because of Your Depression You are the most loving and sensitive human being and usually, you’re the one caring the most out of the whole group of people, but you’re just unable to show it somehow. It’s like something is weighing on your mind and you just can’t seem to let go of it. It’s like a tick that gets under your skin and sucks the blood out of your body. The only difference is that depression sucks every atom of happiness you have in your soul.   Somebody once said every single unhappiness is the same, it’s just that you think yours is the biggest one there is. And it makes sense. You’re not aware of other people’s misery; you’re too busy dealing with yours. You’re good around people; they don’t notice as much how you feel inside. Because you’re quite an actor, now, aren’t you? You assume that people have trouble understanding your feelings. They just don’t get it. Actually, nobody does. It feels like you’re left to struggle with it on your own because the people that surround you don’t know how to deal with your feelings.   Their ‘Get over it!’ doesn’t really help. ‘Gee, thanks, how come I never thought of it? I have to try it out.’  You would if you could. What you fail to understand is you need people around you that will help you overcome your depression. You need people who will hold your hand when they notice you’re being distant. You need people that can differ your fake smile from the honest one. You need somebody who will recognize your effort and hello it. You need people who won’t push too hard, just enough for you to make progress. Baby steps are fine. Avoid those who never see anything positive in what you do, but rather focus on your bad moments. They are making it even worse. It’s not true only depressed people can understand and help you. You’ll just stay in the same spot if you allow yourself to be surrounded by people who forgot to cherish life.   Grab onto somebody who follows his dreams. But don’t compare yourself to that person, you’ll just make it worse. Instead, learn from them. Absorb their lust for life. Absorb their eagerness and desire to get what they want. Make them your life lesson. Chase your happiness as they chase their dreams. Don’t ever give up on it. May your dream be to be happy. Because you really deserve it. It should be ordered by the Constitution for each human to be happy. Avoid those who lost their fate and believe they are powerless. They make you feel the same and in the end, you’ll be reading the same book all over again. Avoid people who are never thankful for anything. They make your efforts look small and no matter how hard you try, it is never enough. They are just unable to be satisfied and it has nothing to do with you. It’s just the way they are. Avoid the ‘critics’. They criticize everything you do. As if they get paid for undermining your work. Just let them go.   What you need to understand is your environment affects you more than you care to admit. Often, you feel like shit because people made you feel like that. They don’t notice you, they cut you off in the middle of your sentence, they say mean things to you or they do their best to enhance your flaws and your insecurities. – ‘Thank you so much, I do it fine myself, already.’ Of course you feel like crap returning home from them. Of course you want to crawl back into your room and cry yourself to sleep. It’s bollocks that you can’t take a joke. You can, but they need to stop. Because they are not so funny when there isn’t somebody they can laugh at. They are just empty boring shells. No matter how long you know these people or how much they mean to you, you need to ditch them out of your life. They cause you harm and that’s the least you need now.  Kiss those assholes goodbye out of your life.   Surround yourself by people who cherish you as a human being. Surround yourself with people who tell you how pretty you are, what an amazing and tender human being you are and how much you mean to them. Surround yourself with people who will notice you, care for you and be there for you. Surround yourself with people that are blessed to have you in their lives, and that make sure you’re aware of it. You don’t deserve anything less. Become the person you want to be surrounded with. Be that person to someone as well. 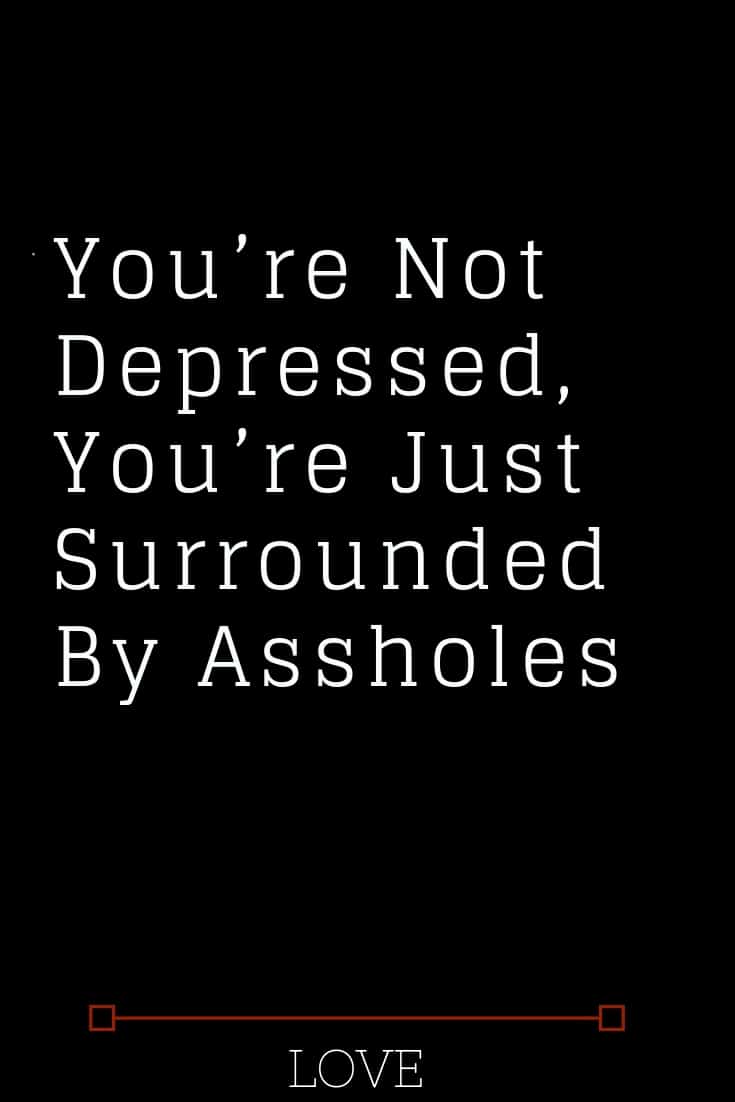