She gave you all she had. And what did you do? You gave her absolutely nothing in return. You used her trust so many times that she couldn’t trust you anymore. It was impossible. You failed. You failed hard.

You missed the fact she went the extra mile for you. Every single time. She would move mountains for you. She would choose you over herself every time. And still, you gave her nothing.

It’s not a surprise she had to give up on you. You know that she did all the work in your relationship. She was the one who kept it alive. It’s like you were just a coincidental spectator instead of a main actor in the whole thing. Why would anybody take that?

She gave you all the attention and affection she had. She made sure you had everything. She kissed you goodbye when you left the house and still, you put her last. She never got a goodbye kiss.

You took advantage of her kindness. You spat on her kind words and loving gestures because you didn’t respect her. You should have taken her in your arms and never let her go. That’s how she treated you. And you deserved none of it.

She never met a person more selfish than you. How could you let yourself lose the one thing that made you a better man – her?

Slowly, you were becoming her burden. She could no longer carry you on her back. Her bones started to crack. She couldn’t take it. Although she kept giving you second chances, you kept blowing them off. You destroyed them one by one and you wouldn’t stop because you were sure you’d get another chance.

You knew she was good-hearted and she wouldn’t leave you just like that and unfortunately, you took advantage of that.

She would give up on you, though, because you gave her more sadness than happiness. That’s the kind of life she didn’t want to live. What’s even sadder is that she actually thought for a second that all of this was her fault. She thought she hadn’t had enough patience and understanding for you. It is you who made her think she wasn’t good enough.

Because, this time it was, “Bye-bye, see ya never!” She had been putting up with you up until this point. She now won’t be giving you any more shots because she knows you don’t want to change. You don’t want to grow and mature. She doesn’t need that by her side.

She gave up on you because you were an asshole who took her for granted and thought you could get away with it. All you gave her were empty words and false promises which didn’t mean anything. Not anymore. She completely trusted you and you failed her. All you did was disappoint her, over and over again.

She gave up on you because she didn’t have a choice. You took her to a dead-end street. You cornered her and she really had no other choice other than to leave. She gave you time to get yourself together.

She had warned you several times that things weren’t going to work this way. But you took her words and actions for granted and you kept doing things on your own terms without consulting her, or anyone.

You put zero effort into making the two of you work, yet you enjoyed being with her. How could you expect anything more than her walking away? In the grown-up world, things don’t function the way you think they should. In the grown-up world, it takes a lot of sacrifice and giving up to make a relationship better and to make your partner happier. In other words, it takes two to tango.

She doesn’t want to give up on you, but you gave her no other choice. 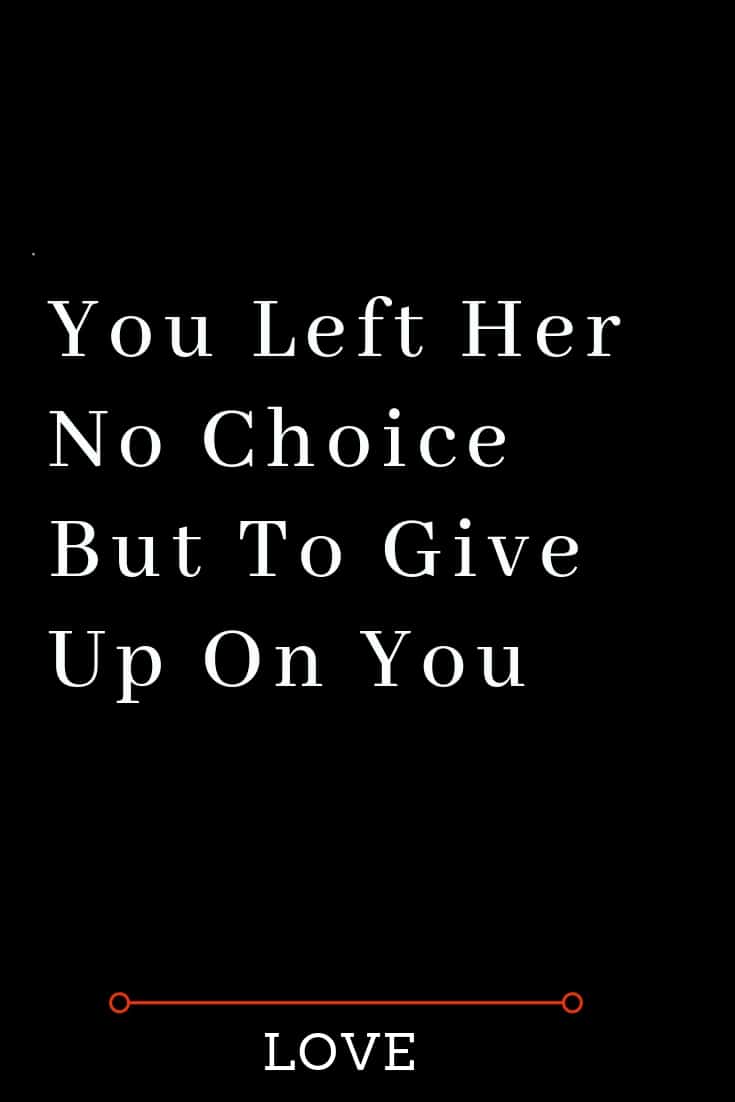 You Must Be Joking To Think She’d Take You Back

I’m Sorry For Breaking Your Heart