If you believe that the stars and the universe have something to do with our personalities, likes and dislikes, dating profiles and what not, then you ought to know which zodiac sign is most likely to commit a crime and end up behind bars.Although astrology and zodiac signs are completely non-fact supported, there are still many who believe in it. Aside from daily, weekly, monthly, and yearly horoscope, the general characteristics about each zodiac sign seem incredibly correct. There are, however, still many skeptics who don’t believe a word astrologers say, and who knows, maybe one day when evidence is discovered to dismiss all the astrological beliefs, traditions and methods, they’ll laugh at us (giggle). But until that day, we, the zodiac enthusiasts, will fancy a good, horoscope read.Over the recent years, crime statistics have provided statistics on which astrology signs are most dangerous and most likely to commit crimes. Their ranking is largely based on the number of criminals they have arrested over the years. They have also analyzed typical behavior tendencies of all 12 zodiac signs and so composed a ranking list of the most dangerous astrological signs. The statistics show which zodiac sign is less and most dangerous and which sign is more inclined towards committing a specific type of crime than others.

Wanna find out if you’re the most dangerous person astrologically? Here’s the list: from LEAST to MOST dangerous.

Gemini is known for being one of the worst zodiac signs because of its inconsistency and dual nature, but the crime statistics suggest that it is actually the least dangerous sign of all. According to the statistics, the number of crimes committed by people born under this sign is the lowest. If you look deeper into the matter, it makes a perfect sense. Geminis don’t take anybody and anything seriously enough to cause pain or even kill. Unless they talk you to death, Gemini is unlikely to pull a trigger. These people can only be involved in stealing and fraud.

Aquarius is good-hearted by nature and is all about justice. People born under this balanced sign are second least dangerous, as they’re charismatic, clever, and with a strong ego that cannot be broken that easily. If an Aquarius is a victim of wrongdoing or injustice, however, they will find the smartest way to get their revenge and get away with it. Wait a second, could the reason why Aquarius is second least dangerous zodiac be that they are so good at committing crimes without leaving any evidence behind? They can’t tell and neither do we. Either way, manipulation is Aquarius’ darkest trait, which is why it is seen as a hacker, con artist, and hustler.

Admit it! You thought you’d find the big, scary cat roaring somewhere on the top of this list, yet here it is. Although Leo is feisty, passionate and impulsive, these people can keep themselves out of trouble. According to the crimes data, many Leos who did some time in jail committed murder for the sole purpose of attracting attention. They do no petty crime: it’s either cold-blooded murder that’ll make the front page or no murder at all. Leo’s vicious temper can force them to do a crime just for the fame.

One of the kindest, most patient and most righteous zodiac signs is how anyone would describe a Libra. But since patience has limits as well, Libras are ready to commit crimes whenever someone takes advantage of their good-hearted intentions or behavior. Nevertheless, it’s still surprising to see Libra as more dangerous zodiac sign than Leo and Aquarius, zodiac signs known for their rebellious nature and vicious temper. Libras have strong values and like justice, so committing a crime is never a random act but rather a well-prepared theft that brings back the balance in their lives.

Virgos are calm, silent, patient, and natural problem solvers, even if the problem is committing a fraud, a theft or a murder. People whose zodiac sign is Virgo strive for neatness and order, and along with their intelligence, they make clever criminals who might get away with a crime. When they get involved in a crime, it’s very likely to be well planed in detailed steps, so there won’t be any evidence. They are most likely to get involved in burglary, hacking and similar types of stealing.

These sensitive, compassionate and highly emotional beings are truly great friends and partners, but when Pisces is provoked, they are not afraid to give them hell. Since fish swim in both directions, you need to be aware of unreliable and short tempered Pisces. According to the crimes recordings, Pisces are mostly involved in drug-related crimes and similar crimes that only tend to hurt themselves. Due to their tendency toward addictions (especially on drug), when Pisces commit murder, it’s very likely to do it in an unusual way.

As the statistics suggest, Capricorn is an average criminal; it’s neither the least nor the most dangerous sign of the zodiac. Despite their high respect for rules, law and order, people born under this sign are not to be pissed off. When they’re pissed, Capricorns can commit some sadistic crimes. They usually don’t commit murder, but when they do, it’s something that can give you nightmares for life. However, they’re not as careful as other zodiac signs, so they are easy to bust for their crimes.

People whose zodiac sign is Scorpio are widely regarded as the meanest and the most sadistic people, but in this list, they are “only” the fifth most dangerous sign. If you trigger the dark side alarm of a Scorpio, be prepared to taste hell, because they can be aggressive, jealous and evil. Most Scorpios are also cold, so they can commit a murder without feeling a little bit of guilt. Scorpios are widely seen as sadistic murders.

The first sign of the zodiac, Aries, can be very dangerous when told what to do or what are they doing wrong. The Ram is known for its stubbornness and for its natural ability to be the leader of the pack. Therefore, people born under this sign can easily get angry at something or someone and commit a crime on a whim. Aries cannot be convinced to soften up and do things like they don’t want to do. This quality makes them perfect mercenaries-for-hire.

The very fact that the Sagittarius has a bow and an arrow makes this zodiac sign dangerous. But that’s not all. According to the reports, Sagittarius is the third most dangerous sign of the zodiac. People born under this sign are unforgiving, so you better be careful what you’re speaking and doing around them. Most of the Sagittarius criminals in the records got their hands dirty in theft and robberies. Unless murder is the only way to getting what they need or want, they are not very likely to hurt or kill.

The stubborn, possessive and raging bull is very temperamental and gets in fight very easily, so being the second most dangerous zodiac sign is not much of a surprise. Characterized as clever but solitary, Taurus have a bigger tendency than all other horoscope signs to get involved in money laundering. Tauruses don’t trust people that easily and they don’t like being around people much, so they’re very likely to do all sorts of solitary financial crimes. Nevertheless, one of the serial killers with the highest known victim count, Luis Garavito, is Taurus.

Finally, the head of criminals is Cancer. Not only does it have the same name of the deadliest disease of the 21th century, but it is also the most dangerous sign of the zodiac. People born under this sign are seen as people who kill because of jealousy or of passion and they are arrested the most. One of the main reason for their passion for killing is their mental instability, or what’s more likely, their common mood swings. The poisonous crab prefers to leave distinguish markings on their victims’ bodies, so they cannot be confused with other killers. 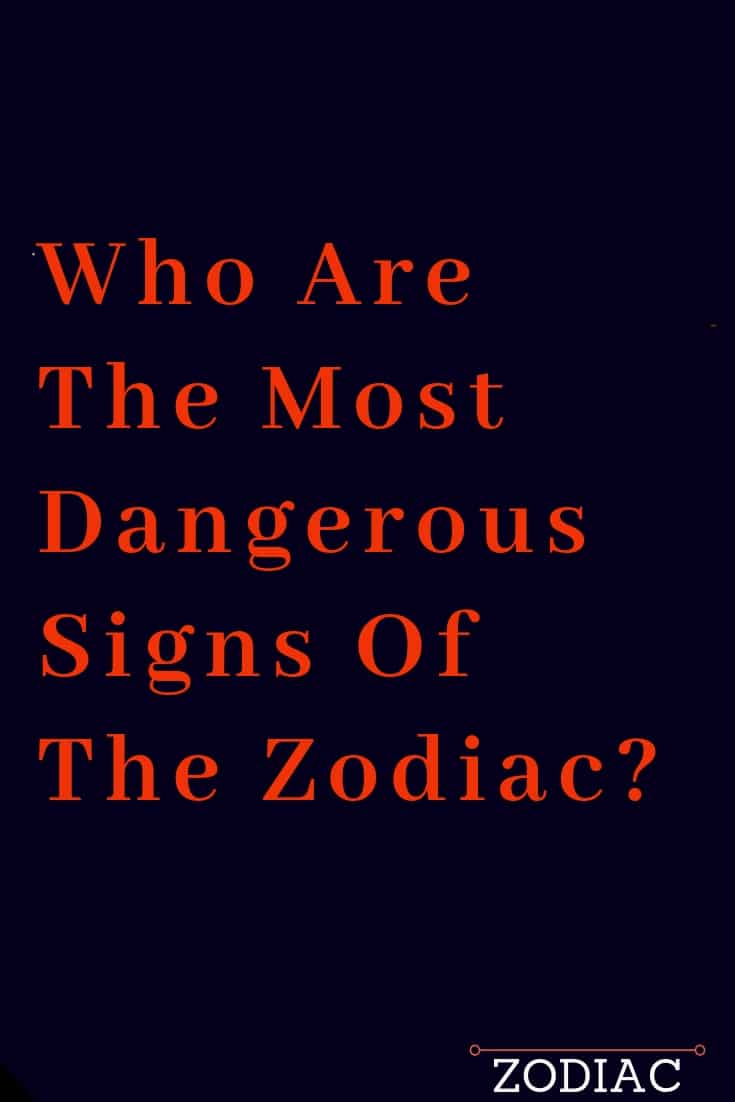 Your One Personality Trait That Could End Your Relationship, According To Your Zodiac Sign