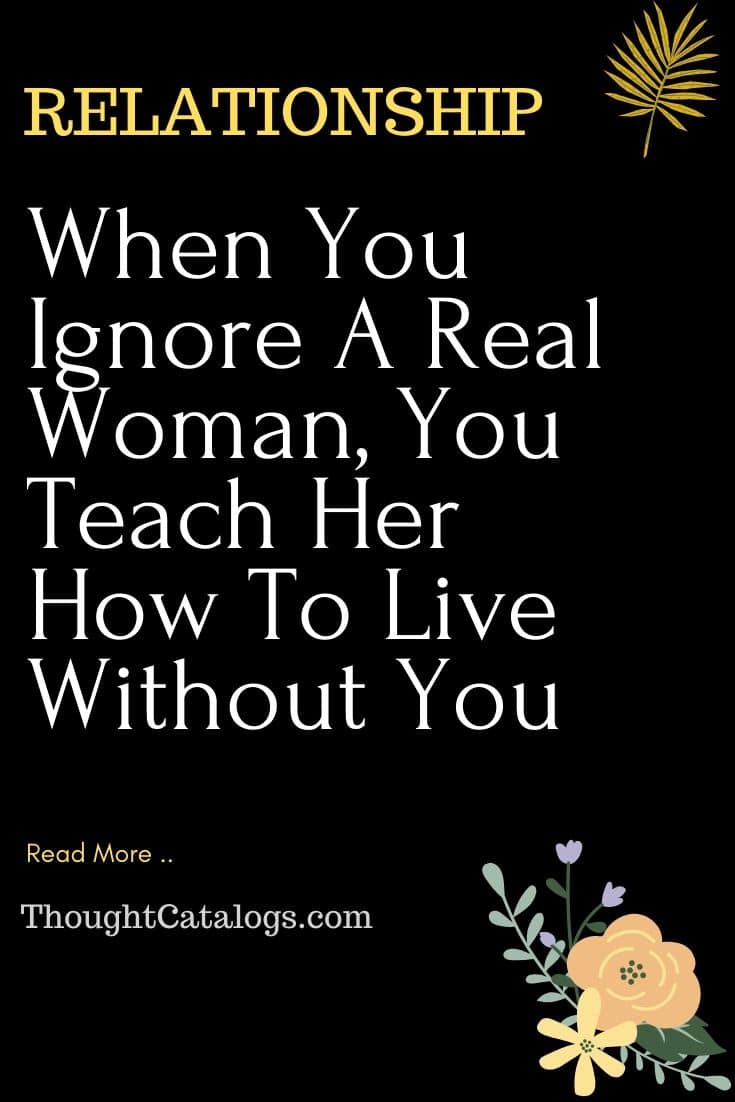 For as long as you can remember, you were taught that you need to play hard to get if you want to have any girl you choose. You assumed that this was the only way to truly win a girl’s heart, to get in her pants and finally under her skin.

At the end of the day, we all want what and who we can’t have, right? And she is no exception; at least, she shouldn’t be one.

You’ve done this trick like a million times; you acted like you couldn’t care less about the girl you were seeing until she was all yours. And each one of them fell for it.

So, here is the drill: The more you run from her, the more she’ll chase you. If you make her doubt your feelings every day, she’ll give her best to enter your heart.

When you treat her coldly, she’ll put an effort into making you love her. When you send her mixed signals, she will spend hours or days thinking about you and trying to decode them.

If you act all mysterious, she will make it her priority to figure you out and to discover all the layers of your personality. If you play hot and cold mind games, she will do everything in her power to get to the bottom of your intentions.

When you leave her on read, she will double-text you to see what went wrong. When you don’t return her calls, she will panically start stalking you, just to find out where you are and what you’ve been up to.

If you are seeing other girls, she’ll compete with them until she has you all to herself. If you give her breadcrumbs of your attention, she won’t settle until she gets your wholehearted love.

When a girl doesn’t know where she stands with you, you automatically become more interesting. You become her prey and she doesn’t give up until she catches you.

And by then, it is usually too late—she is already head over heels for you. After all the effort she put into you, she is ready to do whatever it takes to keep you around.

Things are actually pretty simple: The more you ignore a woman, the more effort she’ll put into chasing you. The more indifference you show, the bigger her fight will be to win your heart.

Well, let me tell you one thing: All of this is nothing but a load of crap. Yes, it might be true when it comes to immature girls who don’t know what they want.

This approach works for girls who have an insecurity problem and who need your approval to see their self-worth. For girls who are into meaningless drama and who need an ego boost in the form of a man.

However, everything is different when it comes to a  real woman because where she is concerned, you’ll only get the opposite effect—you’ll end up chasing her away with this behavior.

You see, this woman isn’t into games. She is not turned on by men who are not sure about her and who have trouble making up their mind about her.

This girl knows what and who she wants and won’t settle for a man who treats her like one of his options. Besides, she doesn’t have the time or the energy for the chase you so desperately crave.

Instead, she is into old-fashioned things; you know, like love, respect, honesty and undivided attention.

So when you ignore this girl, you’re only helping her get used to a life without you. You are giving her a chance to learn how to get by on her own and an opportunity to kick you out of her system.

You’re only distancing yourself from her and you’re helping her get over you while you’re still there. You’re showing her that she is only wasting her time with you and you’re giving yourself a one-way ticket out of her life.

This woman needs someone who will be a consistent figure in her life. A man she can rely on, without having to constantly worry if he’ll turn his back on her the very next morning after he promised her the world.

She needs someone to be her life companion and someone who will make her existence more beautiful. However, what she doesn’t need is a guy who will drain her energy and turn her life into a nightmare.

A real woman needs a real man. The last thing she wants is a boy with deeply-rooted self-esteem issues who needs her going after him to feel like a bigger man than he actually is.

Besides, she is very well aware of her self-worth so she definitely won’t allow you to humiliate her and treat her like your puppy. Yes, she loves you deeply but that doesn’t mean she is ready to lose her dignity just to heal your insecurities.

As much as this woman cares about you, she won’t beg you to give her what she deserves even if her life depends on it. Most importantly—she won’t sit there patiently waiting for you to come to your senses and realize it’s about time to change your ways.

So please, don’t be surprised when she walks away from you and remember that you were the one who caused her departure. When she dumps you, remember that you left her no choice and that you pushed her away with your childish behavior.

Most importantly—don’t expect her to come back and understand that this is her final goodbye.

After all, she warned you that this day would come and that you’re testing both her limits and her patience. She kept telling you to cut the crap, to start treating her with respect and to make up your mind.

However, you continued with your toxic patterns. You thought it was all just an act and you were certain that she would forever stick by you, wasting time on this situationship you dragged her into.

Well, guess what? She won’t. You taught her to live without you so deal with the consequences!

What Each Zodiac Should Say ‘Yes’ To In March 2021

This Is Your Love Style, According To Your Zodiac

May 2021 New Moon Horoscope: This Is How the Lunation Will Affect the Zodiacs

A Poet Tells You Where Your Focus Should Be This June, 2020 Based On Your Zodiac Sign

This Is How Your Love Life Will Change In 2020, According To Your Zodiac Sign

ThoughtCatalogs - June 21, 2019 0
Being hustled in a relationship is one of the worst things that can happen to you. It is not nice to love a man and to...