Have you ever wondered what kind of employee or boss people perceive you to be? Your zodiac sign might have something to do with it. See how astrology influences your approach to your job — and your co-workers’ approach to you.

As a cardinal sign, an Aries is a natural-born leader, a quality that’s exhibited perhaps nowhere more so than at their job. At their best, Aries makes for an enthusiastic, driven and innovative employee or boss, and their independent natures and disdain for routine makes them ideal entrepreneurial candidates. If there’s a new project or opportunity at hand, you can bet your Aries co-worker will be the first volunteer. But their gung-ho, yes-person attitude can come at a price, and they sometimes lack the discrimination to tell which projects are truly worthwhile and even feasible. That, and their bossy nature isn’t always the most appreciated. But what they might lack in judgment or tact they more than make up for in passion, and their fiery optimism is often contagious.

Taurus is all about quality in and out of the workplace, and they want to dedicate their steady, unwavering energies to ventures with a high-quality, bona fide return. That’s because Taureans knows the immense advantage their strong, dependable work ethic is capable of providing, and they’re certainly not looking for it to go waste. They also, it should be noted, require a good deal of security and are intensely practical people; thus, you’re less likely to find Taureans in the startup or freelancing world than other signs. They have a strong sense of discipline, making them ultra-reliable workers, but sometimes this same discipline can veer into overly stubborn territory. That said, you’d be hard pressed to find a harder, more dedicated worker than the Bull.

With their crackling-quick wit and innate charm, Geminis are natural salespeople and have no problem whatsoever talking clients into buying things they definitely don’t need or persuading their boss to give them another raise. And it’s not just their mouths that are quick; Geminis are noted for their indefatigable energy, and they’re likely to juggle several side gigs or hobbies at once alongside a full-time job. To stay at any one job for long, though, a Gemini requires a vast amount of stimulation, change and new challenges to tackle. Otherwise, they’re liable to grow bored and either pour their latent energy into crafting manipulative schemes (the dark side of their persuasiveness) or peace out altogether.

Cancers are team players all the way, and thus these employees and bosses shine brightest in a work environment where culture and community are highly valued. A content Cancer is an asset to any workplace, bringing warmth and a spirit of camaraderie with them. But offend or criticize a Cancer co-worker, and there will be hell to pay, namely in the way they instantly become cold and reticent for an unforeseeable amount of time, much like a crab drawing into their shell. Being a cardinal sign, these people are also apt to take on responsibilities and take them on well, and when they feel their emotional needs are being met, they can make for intensely loyal team members.

Oh, Leos. They not only crave recognition for their superior attributes as an employee or boss, they outright demand it. Their innate belief in their own exceptionalism, it must be admitted, isn’t entirely off mark. They do tend to make top-notch co-workers and bosses thanks to their warmth, gregariousness, generosity, competence and natural ability to lead. A Leo will fearlessly get the job done, and any so-called “adverse” circumstances will wind up trembling in their wake. All that said, the only thing standing between many Leos and true professional greatness tends to be their formidable ego, but if they can gain mastery over this, nothing — and we mean nothing — will stop them from achieving their goals.

One word best summarizes Virgos — perfectionists. Meticulous, industrious and dedicated to their job to the point of justifiably being called a workaholic, employees and bosses under this sign are renowned for their intense drive and ability to deliver the premium goods. Certainly they have high standards — some would say unrealistically high — and they’re never ones to turn in incomplete or shoddy work. That said, it’s not only their own work they’re often critical of, and Virgos can be irritatingly quick to point out others’ flaws. This tendency to call out mistakes isn’t rooted in spite, though — not at all. Rather, the average Virgo simply can’t stomach what they perceive to be mediocrity, and they’ll always be pushing the quality of your team’s output forward.

Not unlike Geminis, Librans are liable to charm your socks right off with their affable demeanors and starry elocution styles. In other words, they’re also master communicators, but what sets them apart is their knack for diplomacy. Librans are unfailingly fair and levelheaded, qualities that make them indispensable in situations of warring egos and ruffled feathers in the office; leave it to those born under this sign to restore the balance (they are, after all, symbolized by scales). Conversely, tooconsistently stressful an environment will cause these harmony-lovers to retreat behind a mental wall, an ability that accounts for the rate at which this air sign is accused of being distant. For the most part, though, your Libran co-workers will bring an added sparkle to the workday.

Scorpions are best characterized, quite simply, as intense. The Scorpio in your office shouldn’t be hard to spot — you can recognize them by their unshakeable, almost disconcerting self-confidence. It’s of a quieter sort than the loud, brassy egos of fire signs, for instance; but, as they say, still waters run deep. When a Scorpio is committed to a goal, come hell or high water, it’s theirs to vanquish (and they do see it in those terms). Their acutely ambitious and highly secretive natures don’t naturally make them the best team players, but their razor-sharp, scarily perceptive minds and unconquerable spirits uniquely position them to succeed.

Sagittarians are above all positive and idealistic people with a penchant for always being at the forefront of the action thanks to their fairly limitless reserve of energy. They make for productive, mobilizing and generally cheery workers, and they’re never the type to be out of ideas for new, innovative ways of approaching a situation. Not unlike Gemini, they require a good deal of stimuli to actually keep them invested in a project, and their frank, often blunt attitude isn’t best utilized in situations involving a need for tact. But if your office could use a consistently sunshiny burst of energy and optimism, look no further than a Sagittarius hire.

Capricorns were practically built to be a success in the working world, and as such, a good amount of their self-worth is tied to their professional standing. They crave the prestige and status that comes with being at the top of their career field, and they have the resolute, ambitious nature — tempered by a good deal of practicality — to get there. You won’t find them scrambling to get to the top, however; “slow and steady wins the race” is closer to the truth for those under this measured, logical earth sign. As status-oriented as they are, they can at times be accused of superficiality or elitism. But ultimately, Capricorns just love a good challenge, and they have the stamina to see it through.

The Aquarian worker is guaranteed to be an original, curious thinker; an innovative spirit; and a challenger of the status quo. Water Bearers’ main interest doesn’t lie in selfish gains, advanced titles or hefty paychecks (though, don’t get us wrong, sizable salaries are nice too). Rather, the average Aquarian requires the knowledge that their professional efforts are contributing to a greater cause or principle in some way. Occasionally, they can be accused of over-complicating matters; not every last detail in the workday needs to be analyzed for ethical merit, after all. But all in all, Aquarians are in possession of a wonderfully forward-thinking mind that can help keep their companies at the cutting edge of any industry.

The average Piscean possesses an acutely high-level imagination, giving them the ability to help actualize previously unforeseen futures and intensely innovative workplaces. Creative, compassionate and often introspective, the ideal work environment for people born under this sign tends not to be the traditional 9-to-5, but instead a space where their individualism is better valued. Pisceans can have difficulty relating to signs of a more practical bend, as to them, everything is abstract, and that can make for some rather disjointed work relationships. But so long as Pisceans are properly appreciated and given the space to be the avant-garde pioneers they are, these co-workers have the ability to bring your team to unimagined heights. 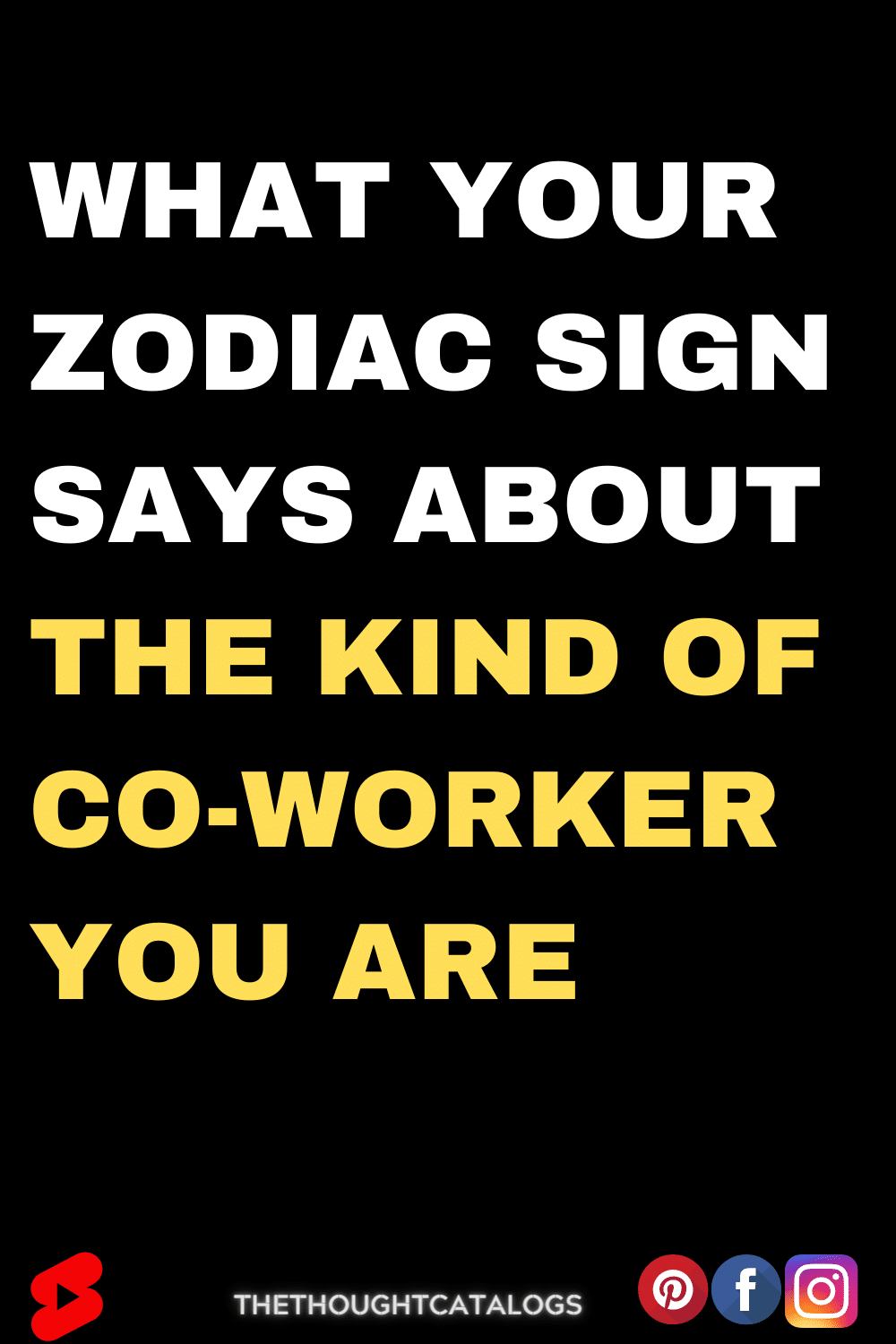 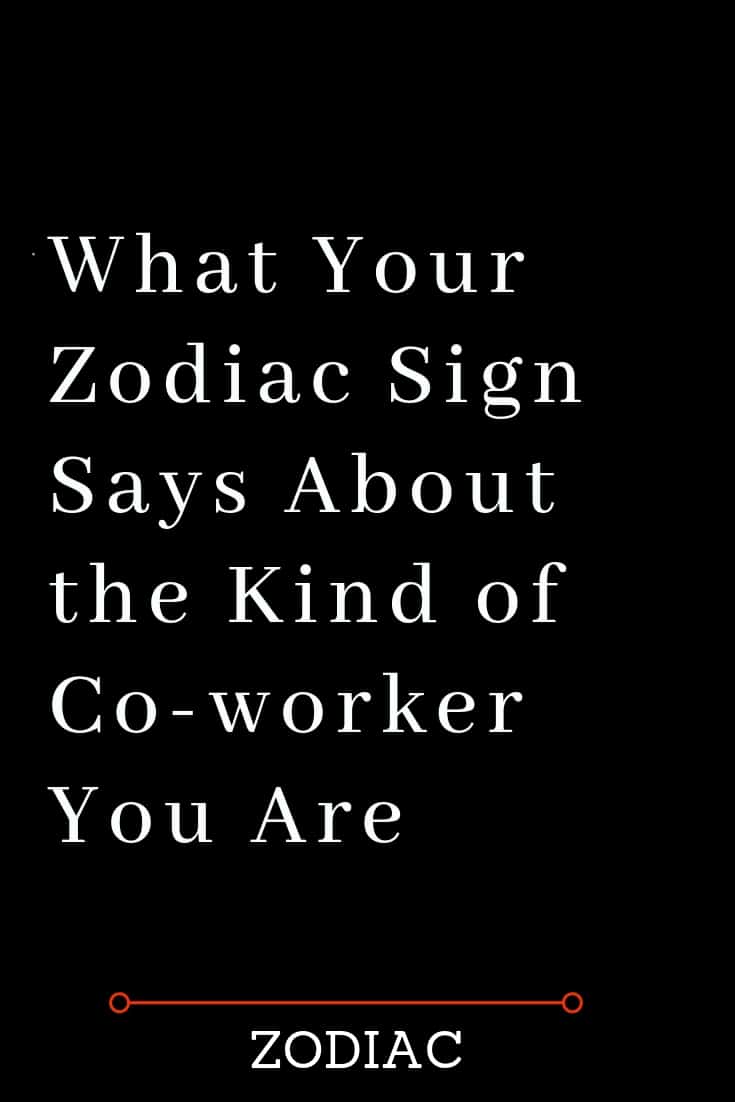