Facebook Twitter LinkedIn Tumblr Pinterest Reddit VKontakte Odnoklassniki
What causes you to feel insecure? We’ve all got things that make us feel this way, no matter how confident and self-assured we may look. Insecurity is part of the human experience, but that doesn’t stop us from trying to hide it.

So much of our personalities are influenced by astrology: our likes, dislikes, ways of being, actions and reactions. So, for the insecure zodiac signs, what causes them to feel this way? Insecurity may seem like a weakness or a flaw, but being insecure can make you try harder and work to improve upon something.

People may not want to present as being insecure so they may push down those feelings or emphasize personality traits that make them appear more in control and confident. If you’re not outspoken or fearless, you may be a little insecure about a lot of things, or maybe you are secure about some things that completely overshadow the things you’re insecure about.

If you’re aware of what makes you feel insecure, you can start to figure out the reasons behind themand what you can do to make yourself feel better. You don’t want to harden yourself to such an extent that you aren’t able to show vulnerability, but you also don’t want to come off as inadequate or unable to do a task when it’s required of you.

Aries is insecure when they feel as if they’re unloved or unwanted. They need to know at all times that their significant other loves them as much as they cherish them.

If Aries has any doubts about the level of affection their loved one has for them, they will feel profoundly insecure. Aries will take risks, but they don’t like feeling like they’re the one who loves more deeply and passionately than their partner.

Taurus’ insecurity is caused by feeling as if they don’t measure up to the standards of others or if they don’t fit in. Sometimes these standards are represented by things, so if Taurus doesn’t have the latest phone or device, they can feel like a failure.

Their insecurity motivates them to work harder and to do what they can to feel as if they’re not only meeting their own goals but the goals of other people.

Fear of making a bad decision can cause feelings of insecurity in Gemini. Most of us have made a bad decision in our past or made a mistake, but it’s as if Gemini can’t let their errors in judgment go.

But instead of making carefully considered decisions, they tend to make poor choices. Geminis can trust their own instincts sometimes and that makes them feel as if they’re on shaky ground.

Guilt causes Cancer to feel insecure, especially guilt that they’re not doing enough for the people that they love. Cancers are emotional and sometimes they have trouble letting go of their past pain.

However, rather than talk about being hurt (as they normally would), they keep it to themselves. They worry that their partners will leave them, and it causes them to hold on too tightly.

Jealousy causes Leo to feel insecure. Leos may appear not to have an insecure bone in their body, but even they have their insecurities. They can get jealous and possessive.

It’s very important to Leo that they are admired and looked up to. If someone else is stealing their glory, they can get very insecure and retreat inward. Leos don’t want just to fit in, they want to be the shining example.

Imperfections (both external and internal) can cause Virgo to feel insecure. Virgos know that no one is perfect, but that doesn’t mean they don’t strive for perfection or that they don’t get insecure when they don’t live up to their high standards.

When anyone works as hard as Virgo does for something that is impossible to achieve, it will cause them to feel as if the foundation of their life is off-balance.

Comparing themselves to others makes Libras insecure. No matter how much success Libra has in their life or in their career, there’s always someone who is doing better than they are.

Libra knows that it’s not a competition and that as long as they’re moving forward, they’re on the right path, but it doesn’t matter — every time they compare their life to someone who is achieving more than they are, they feel bad about their own accomplishments.

Isolation causes insecurity in Scorpio. Scorpios are extremely sensitive and there are times when they may retreat from the world. Alone time is good for the soul, but too much time on one’s own, at least in Scorpio’s case, can lead to feelings of insecurity and awkwardness when in social situations.

The more inward that Scorpio goes, the more out of touch with the real world that they get.

Life failures cause feelings of insecurity in Sagittarius. Most of the time, these people are outgoing, positive, and ready for a new challenge.

But just like any human being, when Sagittarius suffers a devastating loss — such as a death of a loved one, being fired from their job, rejection, or a relationship fail — they are shaken to their core and their confidence takes a huge hit.

Over time, Sagittarius is able to build themselves back up, but it takes a while.

Worry causes Capricorn to feel insecure. Capricorns are worriers, and when things don’t go according to their plan, they will start to think in terms of worst-case scenarios.

Once they start imagining the worst, their worry will escalate, and they will start to doubt everything about their life and their personality. Worry can undermine Capricorn’s confidence and belief in their own abilities.

Inflexibility causes Aquarius to feel insecure. When Aquarius is in a position where they don’t have the freedom to do what they want and are forced to follow a certain regimen, they will feel insecure.

They don’t do well with routine or being told what to do. Being a follower or a subordinate doesn’t make Aquarius feel empowered, it does the opposite. They need to think for themselves or they’ll lose confidence.

Social anxiety can cause Pisces to feel insecure. They can be over-sensitive and feel out of place in certain social events.

Not knowing what to do in a social situation makes them feel awkward and they may retreat inside. Pisces like people and want to have fun, but their awkwardness feeds their insecurity making it almost impossible for them to relax and be themselves. 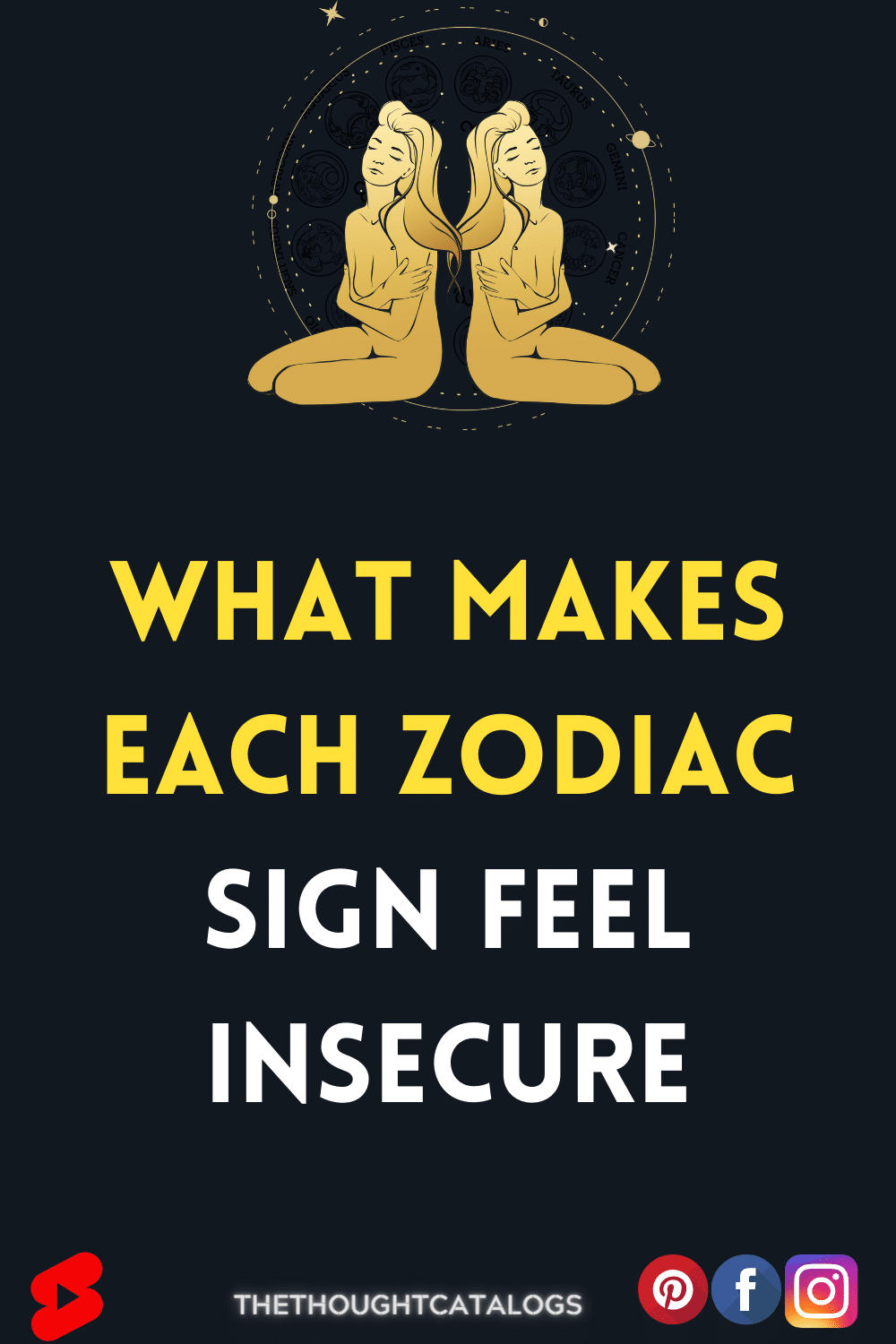 Your Most Challenging Month in 2023, According To Your Zodiac Sign