Love is intense for everyone, but for empaths, it’s out of this world. They feel everything and all the feelings are so intense that in some moments and at a certain point, all those emotions might become overwhelming. They are people who are ‘tuned in to a higher frequency’ and often they are able to pick up on the feelings from the people around them. They frequently feel like it’s their mission to save everyone and at times they’re called angels on earth.

Being such a warm person might sometimes be a bad thing in this cruel world, since there are people who are more than keen to take advantage of it. That’s why there are only certain types of people empaths can and should fall in love with.

1. Someone who is open with their emotions

It’s well-known that empaths are open with their emotions and that they can never really hide their feelings. That’s why it’s advisable that they fall in love with someone who doesn’t play games, someone who doesn’t hold back his feelings. Empaths should fall in love with people who are not afraid to show their vulnerability to them and people who value connection on a heartfelt level.

2. Someone who is honest

To be an empath means to be a person who’s able to be in tune with another person’s feelings and experiences, which is why an empath needs someone who won’t be dishonest and won’t lie to them. They can sense when someone is just playing around and they’ll never stay in love with someone who does this kind of thing. Plus empaths are always honest and they deserve at least as much in return.

3. Someone who believes in gut instinct and intuition

Empaths believe that everyone has their own energy and they believe in that energy. They also tend to follow their inner feelings and that is something they’re led by the most. When it comes to relations with other people, regardless of how good looking someone is or how successful they are, if the feeling is off, an empath will walk away. That’s why they need someone who’s ready to do the same. They should fall in love with a person who doesn’t care about materialistic things or in appearances, but rather with someone who will disregard everything and just walk away when they don’t feel good about someone.

4. Someone who’s familiar with heartbreak

5. Someone who’s able to communicate about everything

When it comes to communication, empaths believe that no matter what the topic is, it’s always better to spill than to bottle it up inside, hence why they’ll push a conversation, regardless of whether someone is uncomfortable or not. They’re seekers of truth and that’s the same as what they need. They need someone who’ll be able to keep the conversation going even when things are uncomfortable, even when they’d rather run away than say certain things out loud. They need someone who believes that talking about things makes the pain present a little less inside humans.

There aren’t more kind creatures in this world and the only one who could follow an empath is someone who’s kind as well. An empath needs someone who’ll be gentle with other people, who won’t fight fire with fire, but who’ll rather try to put himself in other people’s shoes and try to see what caused the fire and how to solve it. They need someone whose mantra is ‘kill ‘em with kindness’.

7. Someone who wears his heart on his sleeve

If you ask an empath, intense love is the only love. They love wholeheartedly and nothing less would satisfy them. So they need a partner who’s ready to give himself all in, someone who wears his heart on his sleeve. They need someone who won’t ever hold back when it comes to love and who won’t wait for anything to say he’s in love once he senses it.

8. Someone who respects personal space

9. Someone who isn’t toxic

Psychopaths, narcissists and other toxic people are a huge ‘no’ for empaths when it comes to falling in love. People being destroyed is what empaths despise the most in their life. Actually, empaths save people from such toxic relationships and that’s why they’ll never sign up to fall in love with someone like this.

10. Someone who isn’t selfish

Empaths are all about giving and that’s why they should never fall in love with someone who’s selfish. Just imagine this kind of relationship—an empath and a selfish person. There would be just giving from the empath’s side and taking without giving anything in return from the other side. That’s why empaths need someone who isn’t selfish and someone who’s ready to give even more than he takes.

11. Someone who is ready to put others first

12. Someone who understands empaths 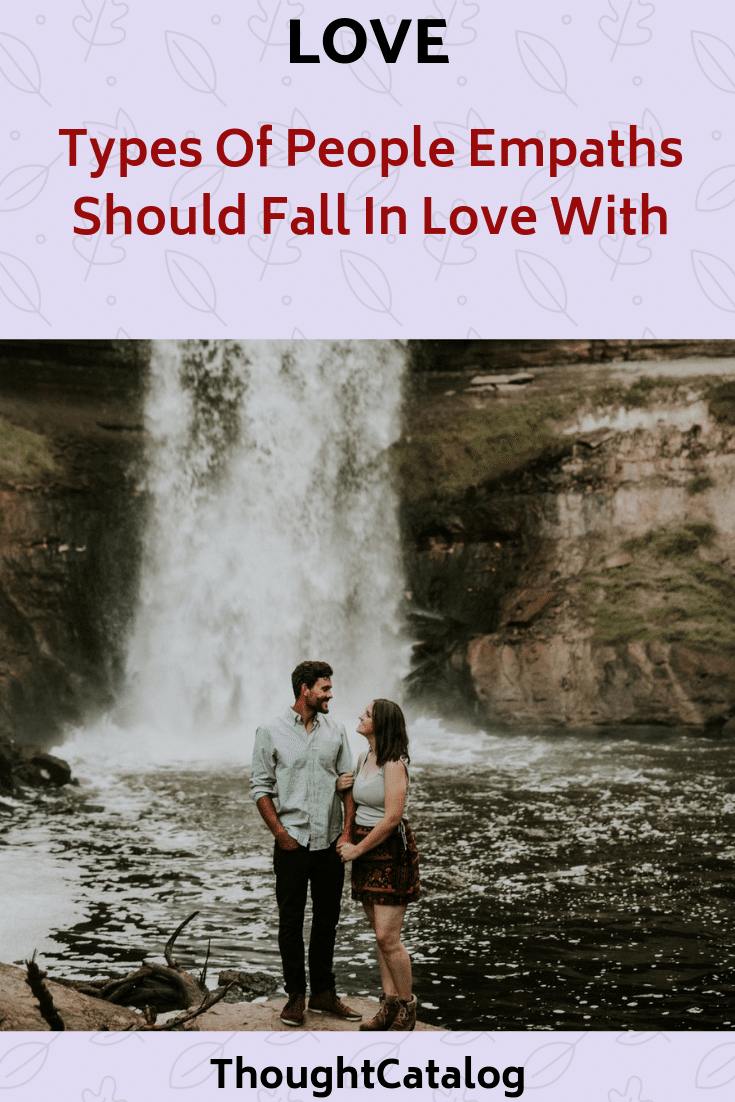