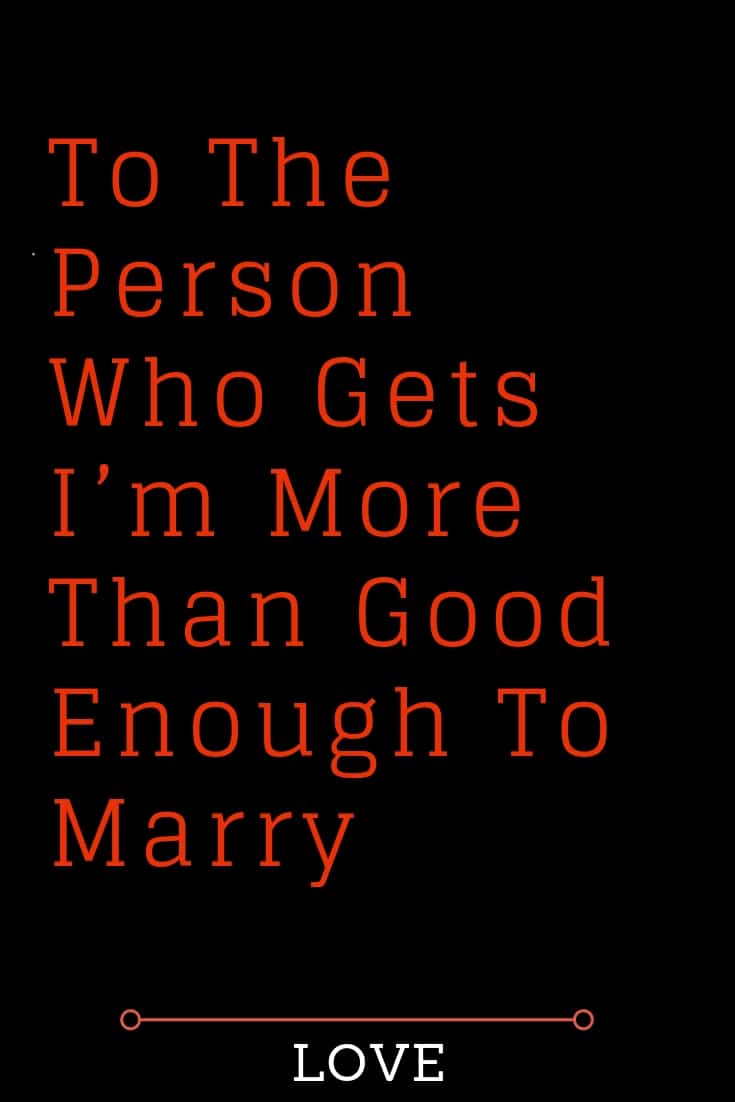 Since you chose me, I need to tell you something. I want you to know where you’re standing with me and what you’re getting yourself into.

The girl you’ll probably marry picks your brains too much.

She asks too many questions.

She needs to know ‘why’ and she won’t stop asking until she gets her answers.

You’ll have to tell her why you love her, why have you chosen her out of all the girls that are out there, why aren’t you giving up even when you know what she’s like…

You’ll need to remind her constantly how much she means to you and you’ll have to be able to handle the love she gives you.

Because she’ll give you all the love she has and she’ll always be ‘all in’.

The girl you’ll probably marry regrets half of the decisions she’s made.

Because she feels too much, she trusts her feelings and she just goes for it. Sometimes, to believe her feelings turns out to be the best decision she could make and sometimes it backfires horribly.

Sometimes she overthinks and replays one thing in her head a hundred times and a million different ways, and sometimes she doesn’t think at all. Sometimes she gets tired of overthinking and she just decides to go with the flow.

Often, she doesn’t feel comfortable with the decisions and the mess she gets herself into so you’ll need to give her some time to figure out how to get herself out of it. Please, don’t give her a hard time for it—, she’s aware of what she does, but she can’t help it. It’s the way she is.

She enjoys getting away from the town, even for one day.

She is wild and she is a wanderer.

She’ll always choose a getaway with you over partying in the club with her friends.

She cries a lot.

She laughs a lot.

She’ll hug you all the time.

The small things matter to her. She’ll feel everything and that’s why that fire in your love will never wear out.

The girl you’ll probably marry was broken way too many times.

When she shows she cares, you’ll have to accept it and return the favor. You’ll have to be patient with her and you’ll have to wait for her to give you her love. Once she does, everything you’ve been through, every single tear that you had no idea where it came from, every breakdown, every doubt will be so worth it.

The girl you’ll probably marry isn’t perfect, but she will choose you every single time.

She’ll learn to cook for you. She’ll watch your favorite show with you. She’ll let you play whichever song you like in her car, and she’ll try to be a little bit less of a mess just for you.

This Is What Makes You Beautiful And Unique, According To Your Zodiac Sign

This Is Why You’re So Freakin’ Annoying, According To Your Zodiac Sign

May 13, 2020 Will Be The Worst Week For These Zodiac Signs & Old Patterns May Resurface

A Sneak Peek Into Your Love Life This December 2020,Based On Your Zodiac Sign

Save Your Efforts For Someone Who’ll Appreciate Them

ThoughtCatalogs - November 8, 2019 0
Instead of giving your all to someone who doesn’t deserve you and trying everything in your power to make that someone notice you, save...