I am not the type of the person that chickens out.

I put my walls up.

I didn’t let you in.

I decided to save myself because it was what I do best.

I decided not to trust you because I haven’t found one man who appreciated what he had in life.

I’ll tell you a few little stories so you could know where all of this is coming from. I’m not the type of the women who’ll say ‘all men are the same’. At least I won’t say it without a good reason. My opinion comes from my experience, and I didn’t even need to try all the men in this world—it’s enough to see those who surround me.

My dad made a hell out of my mom’s life. He married her and then he continued to live his life—to drink, to travel while she was at home, sitting alone at night thinking what good has this marriage brought to her.

What good has this man brought to her when all she ever did was love him and all he ever did was choose somebody else over her all the time. She couldn’t have left because she had nowhere to go. The day she got married, her father told her she is no longer welcome back home and that her home, from that day forward, is at her husband’s side.

Little did he know that her husband would never take her side. So, she continued to live with a man who made her miserable just so her kids could have a home. Little did she know that house felt like home only because she was in it.

My first neighbor cheats on his wife every Sunday and he’s been doing that for the past decade. My other neighbor keeps coming home dead drunk after drinking all the money he earned and giving his wife a hard time for letting him do it. As if nobody knows he’d slap her if she tried to convince him to stay at home and not take all his money with him.

These are all the married men. These are all men that promised their wives ‘till death do us part’ and ‘for better or for worse’—but they’ve only given them the worse. I wonder what they will tell God when they get to see Him.

It doesn’t matter, I’ll do it anyway.

So, I have a brother as well. And he has a lot of friends. And they all look alike. They all have the same scheme when it comes to the opposite sex, and I mean each and every one of them. They see a girl, they like her, they get to flirt with her, they’ll be the best version of themselves, they’ll be sweet and caring and loving and they might even enter a relationship with the girl they like.

But I know each and every time it’s not going to last. They’ll get what they want, they’ll make her fall for them and do whatever they want her to do, and then they’ll move on. They’ll get another girl, reward themselves with a fresh start, and they’ll just ditch the one that’d do anything to have them.

They think girls are there to have fun with, but little do they know how big of a scar they will leave and that it will remain forever carved into that poor girl’s memory. It will be a memory of how she once loved but was only used.

Now, since I’ve told everybody else’s story, I guess it’s time to tell my own, right? I didn’t let myself be intimidated by any of those men. I thought it’s just their destiny—it doesn’t have to be mine and I’ll pick better men, right? Wrong.

See, I was naive to think I am the special one and that I deserve a special treatment. So I tried. One boyfriend, another one… They all showed me the same. They showed me how I was stupid for believing I was any different. And then they showed me all men are same.

All my exes manipulated me, played hot and cold, made me feel insecure about myself, and convinced me I can’t find anybody else better than them. They also had a pattern and each and every time I wanted to save myself from them, they found a way to make me stay.

They’d threaten to hurt themselves or do something else reckless or they just started talking how they love me and how everything will change. But as you can imagine, nothing changed.

There was this play they pulled off for a week making me forget about why I wanted to leave, but eventually, things would get back to the same as they were before. It’s like I was a hamster running on a spinning wheel, constantly taking the same path and going round and round.

Instead of being naive, I made myself grow up. I made myself realize that love is an amazing thing, but I have never had a chance to see it flourishes constantly between a man and a woman. I started thinking about how I might not be the one that gets the love she’s looking for.

I slowly started to doubt I’m going to get my forever love and I would never agree to have half of the love, you know the one that crams all the love in a certain amount of time? I’d rather accept being alone than living the love that’s not really complete.

I know that on the outside, it seems I let go of things so easily, but on the inside, I hold grudges for far too long. I am so mad at my life and this generation of people that make it seem as if love is the hardest thing there is and who keep betraying each other’s trust that I decided to put my walls up. Nobody gets to betray me or my love because nobody gets the chance to have me or my love.

I know you might be a good man and that you haven’t done anything bad and that maybe I should have given you the chance. The ugly truth is that it doesn’t matter. I would find a hard time trusting you.

Eventually, even if you weren’t thinking of doing anything wrong, you would’ve gotten tired and I’d have added you to my list of men that proved to me I’m better off on my own. You might be one of the most amazing men I have encountered in my life, but life taught me that one swallow does not make the spring.

In my experience, men keep leaving broken women behind and I can’t let that happen to me. I can’t be broken because there is nobody to save me. I decided I’ll take care of myself and therefore, I choose to not give you a chance. Yes, it’s a lonely thing to protect my own heart, but I choose to be safe rather than sorry. 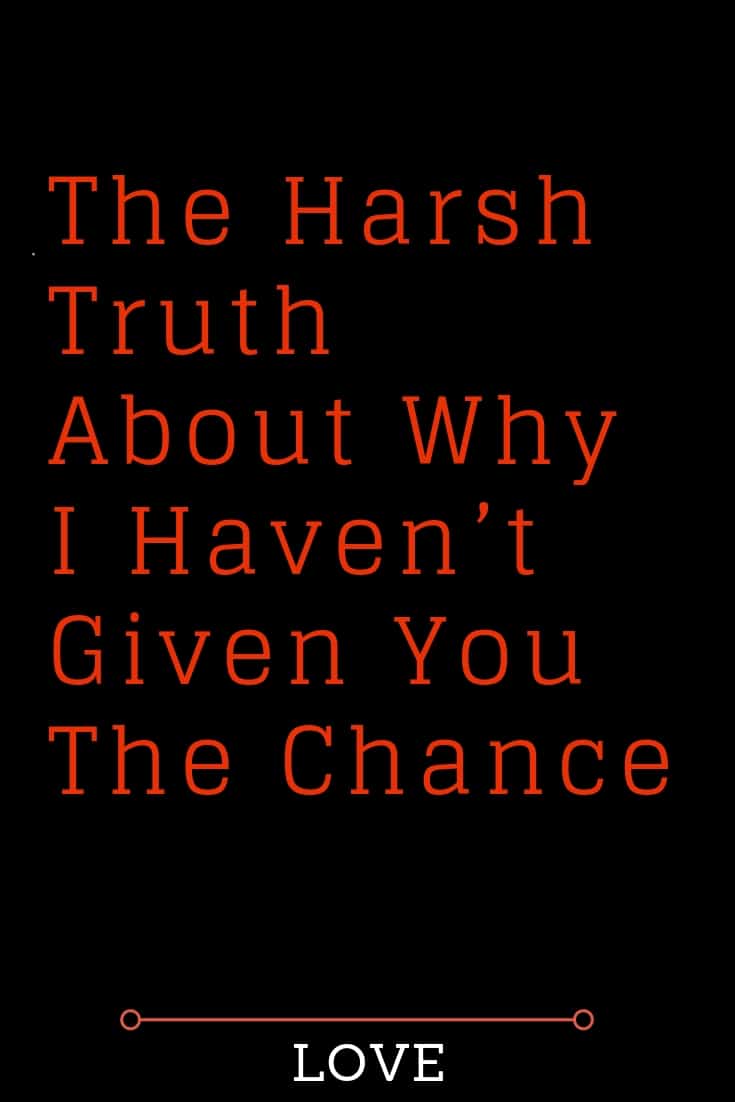 If I Were Your Man I Would Treat You Better