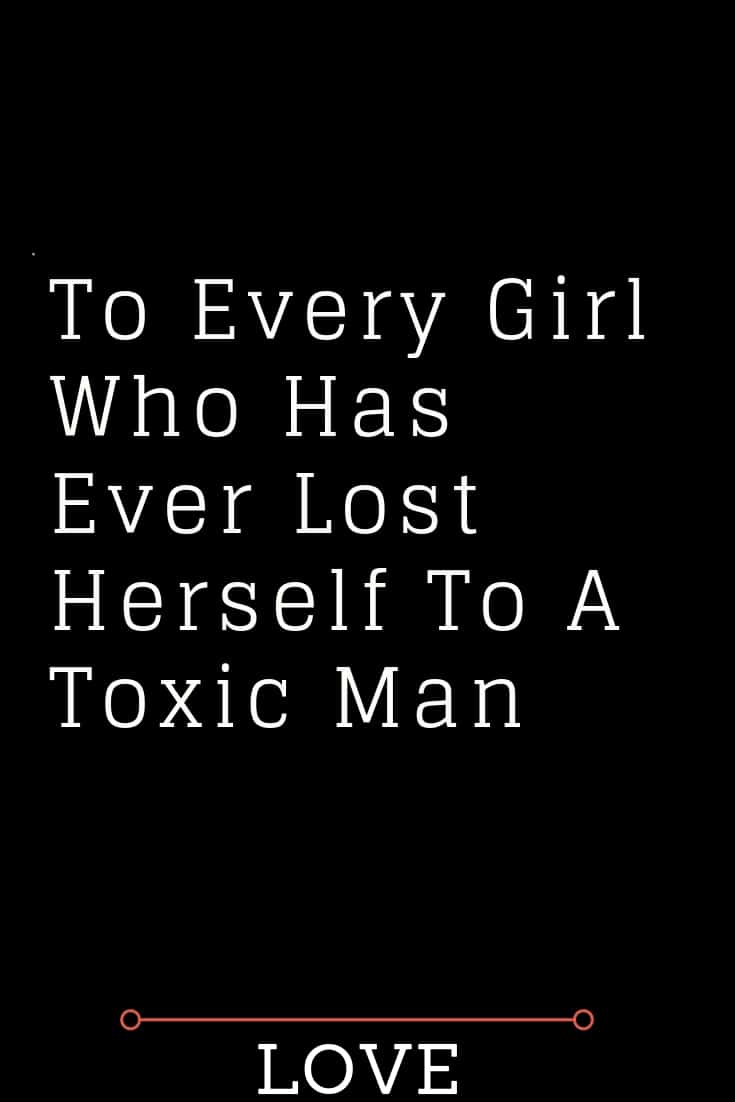 I always wondered If I’m ever going to get back to normal; if I am ever going to be the person I used to be. Relationships should make your life happier. They should add value to your life and make you a better or happier person, or actually make you both.

When dating the right person you get all the love you deserve, but what happens when you date the ‘wrong’ guy?

For far too long, I was ashamed I stayed so long in a toxic relationship. I was ashamed to admit I wasn’t strong enough to save myself.

I stayed way too long attached to a toxic man.

The worst part is I still get shivers down my spine when thinking about where would I be today if I hadn’t done it, if I hadn’t left.

I dated someone who made me lose my self-worth.

Because he wrapped me around the finger and I let him do that. I was weak and unable to fight it. I had no idea how to stand against him and for far too long, I hadn’t any idea what he was doing to me.

I had lost all my self-worth and I allowed him to be my decision-maker.

I dated someone who made me lose my self-confidence.

I forgot how to be happy. Because I was always worried about how I look or how I behave. He never smiled back at me. My jokes were never funny to him and after a while, I started thinking I am the most boring person in the room.

He never bothered to lead a normal conversation with me and after some time I stopped asking questions or trying to engage him in conversation.

Because of him I didn’t see myself as the pretty girl I used to be nor did I see myself as somebody who could awaken any desire in a man.

I dated someone who I thought I knew.

I strongly believed he’s not like that; he couldn’t be.

I would never fall for such a guy. I kept thinking it was just a phase and it’ll be over soon. The sad part is, it never ended.

I dated someone who I didn’t really know.

Because he never showed me his true face. It could be that he had one too many faces and I never truly got to meet him.

I wanted him to be the man I thought he was. I constantly waited for him to be the guy I’ve created in my head and maybe this is the reason I stayed too long with him.

I trusted that there is something good in him and that he loves me. I thought he had never found the space to be who he really is.

But he was who he really is. I was just too ignorant to accept it.

I dated someone who made me question everyone.

Just because he was bad, I let myself be fooled that every person is the same as him. I was afraid to let anybody in my life because I was terrified of the idea that there are people as bad as he is.

I could never communicate my problems to anybody because I thought they’d approve of his behavior so I struggled with my own burdens, alone.

I forgot I had friends and I lied to them about how the things between the two of us were. I presented our relationship as the best thing that happened to me when in fact, it made me weak and too scared to live.

I dated somebody who was incapable of loving anyone but himself.

No matter how much love I had for him, it just couldn’t cut it. It wasn’t enough.

Regardless of how huge a smile I had when I saw him, he never returned the smile. He never welcomed me in his hug nor did he ever hold his hands open for me.

He made me feel alone even if he was physically sitting next to me.

For a while, I had this feeling that the more miserable I was, the more it made him happy.

I dated someone who had to put others down to build himself up.

I could clearly notice the pattern. The people he was surrounded with always looked up to him and asked his approval, indirectly or directly, it didn’t even matter at the end.

He was always superior to them and that made him feel strong.

He is one of those guys who was always in a relationship. He always had a girlfriend because he needed someone to put down in order to make him feel better.

I dated someone who I let manipulate me.

Whenever he’d ignore me I thought I deserved it. Whenever he lied to me, I kept quiet because I had no guts to confront him. He made me believe I was to blame for everything and that’s why I sat there in silence.

I sat in silence because I had to. “If you trusted me, it wouldn’t matter who I talked on the phone.” or “I give you things nobody else would even think of because you don’t deserve it.” were the sentences that always made me feel like the one to blame for every problem in our relationship.

At the end, I was the crazy, obsessive one.

I dated someone who was jealous of me.

He was jealous of every single friend of mine, of any person I’d greet with a smile regardless of their gender or their age.

What made him even madder, and he had to take it out on me, was when some of the guys would treat me nice. I was a ‘call girl’ because no normal or decent girl knew so many guys.

And I believed him because it was what he said.

I hated myself for being a nice person and loving everyone, so I started walking in the street and asking God that nobody greets me. I stopped smiling at strangers and I became less and less the bubbly person I used to be.

I dated someone who made me feel stronger.

Because I felt strong enough to walk away from him. Because I left him, I feel there is nothing now that could bring me down. I’ve been through hell and I’ve made it.

I found the strength to be the old me, to greet people with a smile, to love little kids and to play with dogs I stumble upon on the street.

I felt like the funniest person in the world and my friends enjoyed having me, the true me, back.

Because of where I was before, I am strong enough to love again and I am brave enough to stand up to myself.

Because I brushed everything aside, loved him with everything in me, and that didn’t make him love me back, showed me I could survive only on my love.

Before Falling For A Strong Girl With A Sensitive Soul, Know This

How To Choose Between Two Men? With The Help Of These 13 Questions

ThoughtCatalogs - August 31, 2020 0
I hope you open your heart to see all the beauty and goodness that’s around you and that is still yet to find you....