A passionate and hot-headed Aries won’t waste words on you.

If you’ve done something you’re not proud of, or on the other hand, if you have no idea what you’ve done, be sure that she will let you know.

She won’t keep everything hidden inside, nor will she keep quiet.

After sending dozens of texts and calling her several times with no answer, she will answer you, but in just one word.

That’s code red. Let her cool off and then try again.

A woman like this will do whatever is on her mind. She will get what she wants one way or another.

So, if you screwed something up, you will definitely know all about it.

She won’t come at you, she won’t scream at you, but she will let you know that you did something bad.

Don’t be surprised if she gives you the silent treatment because at that point, she doesn’t want to talk to you.

She doesn’t even want to look at you. She’ll avoid you because she’s angry as a bear.

Gemini is a bit more complicated than others. She will keep what is bothering her deep inside.

If you notice something wrong and you ask her, she’ll tell you she’s perfectly fine.

Don’t settle for that answer because it’s usually the other way around.

Usually, she’s boiling with anger deep inside but she keeps it hidden so well.

No one would blame you if you had no idea she’s been mad at you for days and you only found out later because she looks like everything is okay.

Unlike Gemini, you’ll definitely know she’s mad at you because she won’t be able to hide it.

She is usually very sensitive and even the small things get to her, so it’s no surprise she’ll get angry with you if you cross the line even a little bit.

You’ll know she is pissed off as soon as you see her face. Her cheeks are going to be red and her eyes swollen with tears.

That puffy face is a clear sign you’ve hurt her. Only instead of yelling, Cancers express their anger through crying.

She is a piece of work and you really have to be a bit more cunning to understand what she’s doing.

She is not that simple to understand. She’ll pretend like everything is okay but the moment you get near her, she will move away from you.

She will completely deny your attention and love. Face it, that hurts so much more than her giving you the silent treatment or her yelling at you like crazy.

Virgos are passionate and they don’t know how to hide their anger. When they are pissed, the whole world has to know it.

When she’s angry, she’s mean and loud. She will say things to you that you never had an idea she was capable of saying.

Of course, most of the things she says she doesn’t mean. They’re just things she blurted out in the heat of the moment.

Not a lot of people can work out what is really going on inside her mind unless she allows her emotional state to be visible.

But the safest way of knowing she’s pissed at you is when she ignores just you and is a total sweetheart to everyone else.

She is also the type of girl who will ignore you. Although very passionate, if you hurt her feelings, she will be cool about it.

There will be no big fuss, no big deal, as you’d expect from a Scorpio girl. The biggest thing she’ll do is leave your message on read.

But that sometimes hurts even more than a fight. And believe me, a Scorpio girl is aware of that all too well.

These girls have a great sense of humor.

They are always cracking jokes, usually at their own expense, but when they go silent and serious with you, something is wrong.

You’ve definitely pissed them off.

So, if you’re giving her a chance to joke around with you and she completely ignores it, start digging into the past few days to figure out what you did wrong.

I’m sure she’ll forgive you if you apologize sincerely.

Capricorn women are usually very altogether and down to earth.

They always know there is a solution to every problem and nothing is too hard to handle—unless it’s about their feelings.

From a distance, she looks cold and reserved but inside she is burning with wild emotions.

If you hurt those emotions, she’ll go crazy on you. She’ll scream her lungs out because all she’s feeling will finally burst out.

An Aquarian woman suffers in silence. She won’t tell you anything, she won’t scream at you.

She will intellectually process what happened and eventually, she’ll deal with it. Don’t be surprised if you never knew that she was pissed off at you.

However, there is one thing that will help tell you she’s angry with you.

If you check any of her social media accounts and find sad or rebellious songs posted, that’s your clue. Do something about it.

Our sensitive and delicate Pisces will threaten to break up with you if you piss her off.

She does that because she is actually scared you’ll break up, so she uses that opportunity to jump ahead of you.

She is not risking getting her heart broken or her dignity being messed with. 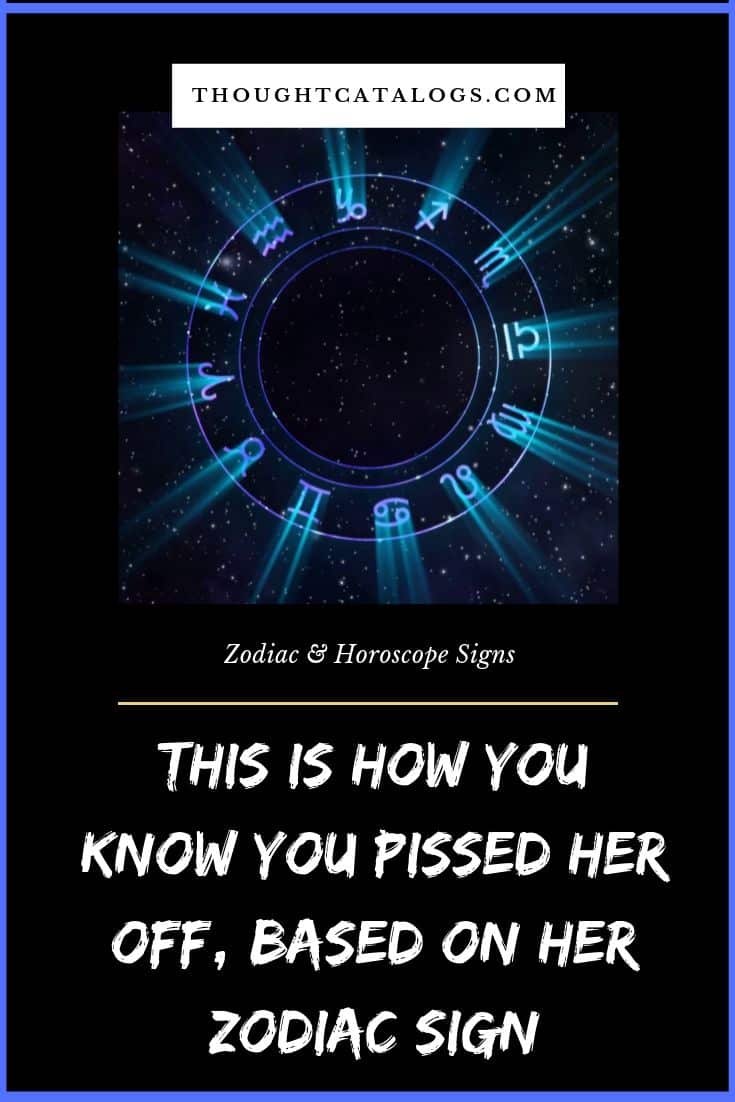 Check Also
Close
Featured Posts
Opposite And Least Compatible Zodiac Signs, Based On Your Zodiac Sign
15 hours ago

This Is Your Most Secret Fear In The First 6 Months Of 2023, Based On Your Zodiac Sign
16 hours ago

These Zodiac Love: Sooner Or Later These Zodiac Signs Have To Be Together, Based On Zodiacs
16 hours ago