When a relationship begins, the focus is usually on the good stuff: the thrill of that first emotional connection, the rush of falling in love, and the shiny newness of our sex lives with our partners. But once the honeymoon phase ends and we are no longer idealizing our partners, we become increasingly aware of incompatibilities and romantic limitations.

While some bonds simply breakwhen differences arise, others linger on even when they’re no longer functional. When they do, lovers may venture outside of their partnerships to seek intimacy and validation through infidelity.

To make matters even more complicated, sometimes those in relationships worth preserving stray, too. Partnership is difficult: There’s no way two unique souls could ever perfectly align.

According to the teachings of astrology, our sun sign symbolizes our outer world, our moon sign defines our emotional personality, and a number of other astrological placements capture unique aspects of our essence. All of these placements, including sun signs, can give us insight into the tension we may have with our partners — and the ways in which different individuals are most likely to cheat

Cheating is a human construct, one that has captured the imagination. It’s a central theme of countless biblical and mythological stories, as well as modern-day gossip. And although people from all backgrounds are equally susceptible to cheating, each zodiac sign has a different approach to infidelity.

While some signs get swept up in the heat of a moment (Aries, Aquarius), other signs plan their trysts in advance (Cancer, Virgo). Some signs get off on the attention (Leo, Libra), while others are attracted to indulgent, forbidden love (Taurus, Scorpio). And there are some signs that are simply fueled by curiosity (Gemini, Sagittarius), while others seek deep, emotional connections (Pisces, Capricorn).

Ahead, discover what the stars say about how every sign is most likely to cheat. (Remember, we’re talking about astrological impulses here, not predictions of the future or excuses for bad behavior: The stars can offer us wisdom, but we’re the ones who determine our fates.)

This sign is known for its fiery passion, aggressive impulsivity, and competitive nature. Aries governs the head, and while this technically applies to the head that’s attached to the neck, it may encompass a broader definition in practice.

As the zodiac’s first sign, willful Aries loves anything shiny and new, so when it comes to cheating, rams are easily seduced by novelty.

For these lovers, it is unlikely that any extra-relational rendezvous would be pre-planned: They’re inspired by the thrill of the moment, making them susceptible to the siren call of spontaneous one-night stands. Everything is a conquest for an Aries, so when they cheat, they’re usually not seeking emotional intimacy — their desire is purely carnal.

TAURUS (APRIL 20 – MAY 20): CELESTIAL BULLS LOVE TO INDULGE — BUT SOMETIMES, THEY CAN GO A LITTLE OVERBOARD.

Taurus is ruled by Venus, the indulgent planet connected to love, beauty, and money. The first earth sign of the zodiac, these celestial bulls love to have their senses tantalized: Taureans get weak in the knees for gourmet food, aromatic fragrances, and sensual massages.

These celestial bulls are obsessed with romance, so when it comes to cheating, the Taurus lover is likely to engage in clandestine relationships rich in luxury. Prix fixe dinners, five-stars hotels, and bathtubs filled with rose petals are musts for a roaming bull.

In Taurus’s eyes, if you’re already cheating, you might as well double down on hedonism.

GEMINI (MAY 21 – JUNE 20): NO STRANGER TO PAIRS, THESE CELESTIAL TWINS LOVE TO EXPLORE ANYTHING IN MULTIPLES.

In popular culture, Gemini is the sign most associated with cheating (Scorpio is a close second). Remember, cosmic warriors, Gemini is synonymous with duality, not duplicity. But although Gemini isn’t necessarily predisposed to unfaithfulness, these curious air signs are easily distracted.

Gemini is intrigued by polarities, so a Gemini lover may be inclined to seek the opposite of what’s offered in their relationship. If they’re intellectually connected to their primary partner, they may explore a more sexual dynamic on the side. Alternatively, if Gemini’s monogamous bond is extremely physical, a cheating Gemini may look for something emotional.

These celestial twins are all about multiples, so don’t be surprised if a two-timing Gemini is actually exploring several flings simultaneously.

Symbolized by the crab, Cancers are sensitive creatures who hate feeling vulnerable. These water signs take their partnerships very seriously — after all, it’s not every day that these delicate crustaceans emerge from their shells.

Cancers need to feel safe, supported, and understood by their lovers, and if they do not, they may seek intimacy elsewhere. Crabs walk at an angle, and likewise, Cancers can have a sneaky sensibility:

Their secret relationships tend to be planned and plotted. Cancers do not like approaching conflict straight-on, so they’ll take extra precautions to make sure any trysts go undiscovered by burying any evidence deep in the sand.

Ruled by the heart, fiery lions are always falling in love. Leos like their romances as big as their personalities and nothing makes them purr like unabashed adoration.

They need to feel like they’re the center of attention (after all, their sign is governed by the sun), and accordingly, celestial felines can be easily seduced by others’ desire. Leos are zodiac royalty and they always want to engage their fans.

In fact, Leos are often not even interested in cheating until someone else expresses their attraction. It’s not easy for them to reject praise, so as long as there’s applause, they find secret relationships hard to resist.

Though traditionally symbolized by the virgin, this earth sign shouldn’t be misunderstood as chaste by default. Analytical Virgos are hyper-aware of absolutely everything — they can always spot tiny cracks, flaws, and fallacies.

Though Virgos make excellent editors, this nitpicky quality can take an ugly turn when manifested in a relationship. If a Virgo finds enough data points to conclude that their existing relationship is imperfect, these earth signs may begin to look elsewhere.

Because they’re idealists, it’s easy for Virgos to become obsessed with crushes or secret lovers, comparing their strengths to their primary partner’s weaknesses. In time, however, duplicitous Virgos are heartbroken when they realize that the quest for perfection is always futile.

LIBRA (SEPTEMBER 23 – OCTOBER 22): LIBRAS ARE ARE NATURALLY CHARMING, BUT SOMETIMES FLIRTATION CAN GO TOO FAR.

Symbolized by the scales, Libra is always seeking balance and symmetry. Accordingly, these air signs often prefer to be coupled than on their own. But just because Libras love relationships doesn’t mean that they’re always loyal: These air signs love to be well-liked, making Libra one of the most flirtatious signs of the zodiac.

Whether the cheating is emotional or physical (or a combination of both), straying Libras are always weighing their options.

It’s not fair to assume that all Scorpios are obsessed with sex. The truth, cosmic warrior, is that the physical act of intimacy is often less important for Scorpios than the intensity of a connection.

Named after the shadow-dwelling, venomous arachnid, Scorpios thrive on power and control. These water signs are drawn to dark and mysterious experiences, so when it comes to cheating, Scorpios are fueled by the danger of clandestine romance.

Scorpio is aroused by secrets, so in many ways, the affair itself is more enticing than the side piece. Exceptionally private, Scorpios will take extra measure to make sure that any hidden romances will never see the light of day.

Represented by the brazen archer, Sagittarians are natural thrill-seekers. The last fire sign of the zodiac, Sagittarians loves anything that gets their adrenaline pumping and supports exciting exploration.

Even in a monogamous relationship, Sagittarians need plenty of freedom. If these archers believe their independence is being compromised, they’re tempted to roam. Sagittarians love adventures, so a two-timing Sagittarian will seek dynamics that expose them to new worlds.

Duplicitous archers may find themselves cultivating a secret long-distance relationship or even pursuing a high-stakes partnership that risks discovery at every turn. Sagittarians like to live on the edge (you could say that Danger is their middle name — yes, I strongly believe Austin Powers is a Sagittarius).

CAPRICORN (DECEMBER 22 – JANUARY 19): FOR CAPRICORNS, EVERYTHING — INCLUDING CHEATING — CAN BE RATIONALIZED.

The last earth sign, Capricorns approach everything — including their interpersonal relationships — with facts and logic. They treat their romantic relationships like a business, considering the different ways each party benefits from the merger.

If mutual needs are satisfied, a Capricorn lover will feel content. When a partnership is no longer productive, however, it’s easy for these sea goats to justify straying. Capricorns may treat two-timing as market research, exploring their options to figure out which type of bond is the most advantageous.

If caught, a duplicitous Capricorn will likely already be prepared with dozens of “rational” explanations. At the end of the day, everything is a negotiation for these astrological entrepreneurs: Even the most emotional circumstances can be mitigated by a good deal in their eyes.

The most humanitarian sign of the zodiac, Aquarians are fueled by justice and egalitarianism. In fact, these air signs care so deeply about the greater good that it’s often hard for them to maintain interpersonal dynamics: One-on-one relationships may simply seem inconsequential to these visionaries.

Aquarians build relationships with passionate people who share their values, so when it comes to cheating, they’re most tempted by those they find inspiring. Friends often become lovers for Aquarians, and their close connections can transform into secret trysts.

On a bad day, Aquarians are known for their aloofness; if a two-timing Aquarian gets discovered, they may display an icy remorselessness.

The most ethereal sign of the zodiac, Pisces are deeply empathetic, sensitive creatures. This water sign is governed by Neptune, the otherworldly planet associated with dreams and creativity.

There is a dark side to Neptunian energy, as well: On a bad day, the Pisces spirit is connected to delusions, escapism, and secrecy. Pisces can become seduced by their own fantasies, convincing themselves that a duplicitous relationship is actually the byproduct of a majestic, karmic connection.

This reality only exists in their imagination, and Pisces can get so swept up by an affair that they end up lost in an emotional sea of their own making. 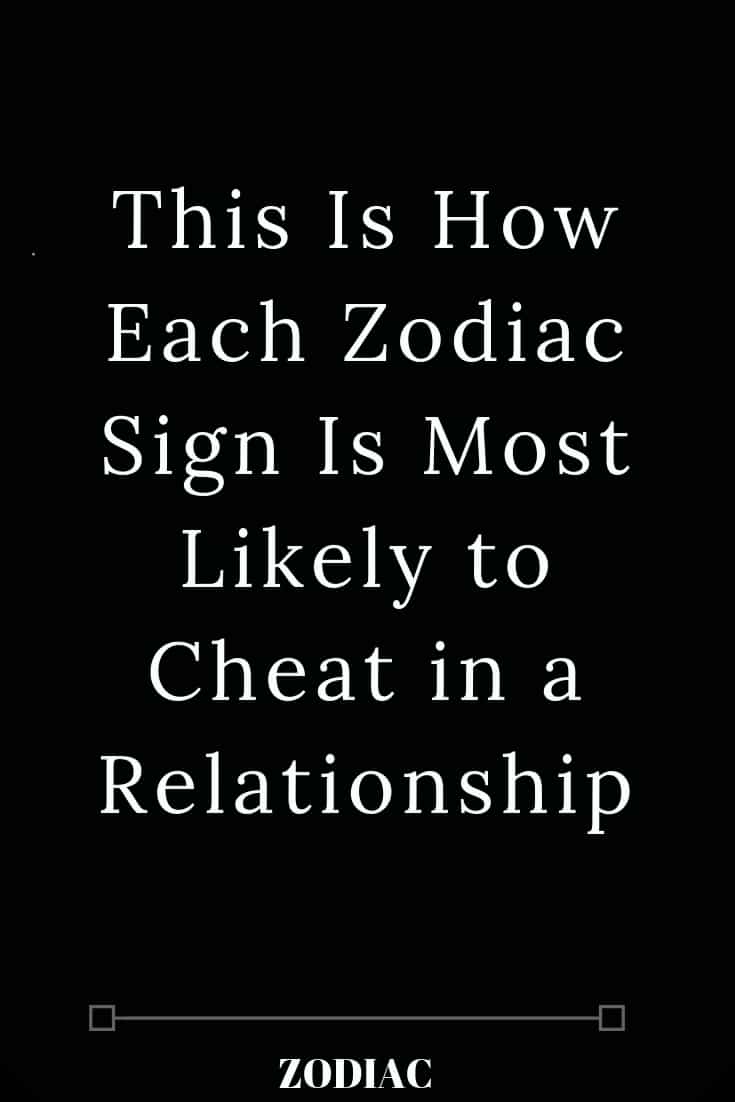 This Is What Makes You Happy According To Your Zodiac Sign

That One Thing About You, That You Try to Hide From The World Based on Your Zodiac Sign