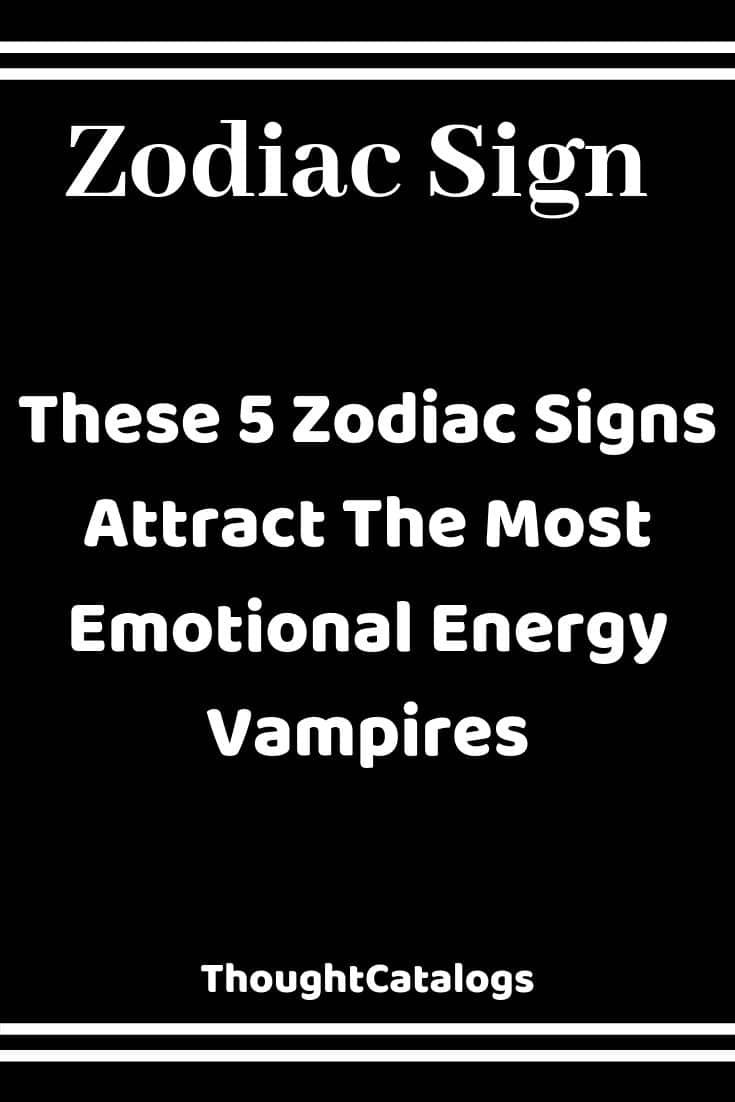 Emotional vampires are everywhere but it seems they usually belong to one of five zodiac signs. That being said, other signs can be emotional vampires as well but these signs are the ones that tend to take the cake more-so than the rest.

Now to begin with if you are somehow not aware of what an emotional vampire is, they are usually people who feed off of our energies and do-so through emotional means. They even when around for a short period of time leave us feeling exhausted and as if their lives falling apart are our own doing even when usually that is not the case. They negatively affect those around them whether they realize it or not and it can be quite exhausting for those who actually care for them.

Below I am going to go over some of the zodiac signs that tend to be emotional vampires and exactly which of their traits make them more inclined to be EVs. That being said, if you belong to one of these signs becoming more aware of your own actions is important and can help you overcome this kind of thing.

People who belong to the sign Taurus in a lot of situations turn out to be emotional vampires because they seek validation through the people in their lives. They lash out when things do not go their way, and they fall apart when they’ve had too much. They bring the people around them down by blaming all they can on them and usually leave them feeling as if they are causing the Taurus pain even when that just isn’t the case.

Those who belong to the sign Virgo who ends up being emotional vampires are often unable to slow down their overly judgmental ways. They say whatever they feel like they want to say and refuse to think about the consequences their words could have. These people bring others down so that they can compensate for their own flaws and shortcomings which is never a good thing for anyone involved.

Cancer people are easily the most likely to become emotional vampires at some point. They rely too heavily on others for their happiness and this causes serious issues. The only way to fix this is to become more independent and to stop closing off from the rest of the world. I know, for a Cancer that is no easy feat.

Sagittarius people tend to be emotional vampires because they love to get in too deep with people and then jump ship. They make you feel great for a moment and then bring everything crashing down. They will leave you for no reason and disappear out of your life within the blink of an eye. Being around them is like being stuck in limbo, you never know what to expect.

Those who belong to the sign Aries are often emotional vampires because they take their anger and frustrations out on their friends and family. They work too hard and far more than they should leaving them with little to no free time which makes things much worse. While you might not see them much, they’re always freaking out and pitching fits when you’re near them. It’s like they are just never happy even when you’re doing all you can to help them get where they want to be.

July 2021 6 Zodiac Signs That Are The Biggest Overthinkers

It’s Never Too Late! Your Zodiac Sign Reveals Where And When You Will Meet Your Soulmate!