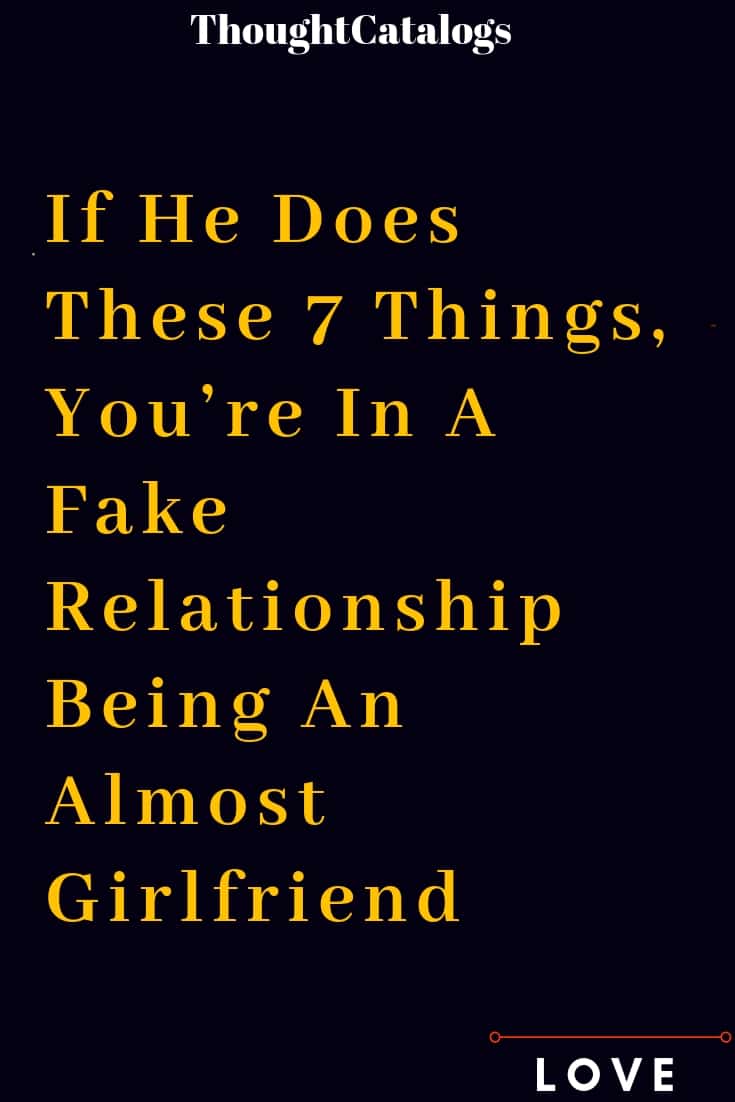 What is a fake relationship?

Many of us don’t even know that we are in fake relationships. It’s hard to explain why that is so but one guess would be that we simply refuse to open our eyes and consider a change.

Change is difficult and not many people welcome it. No matter whether it’s good or bad, at the time when you have to make a decision that you know is going to make things different, change is just hard.

You’re letting go of everything you know and starting something completely different. That future that awaits you is scary because, naturally, you don’t know what is going to happen.

That’s why some of us choose to believe that our relationship is the right one. Because it’s easier to live believing that the problems between you and your partner are just temporary. Otherwise, the only thing you have left is to accept that you are in a fake relationship.

To make things easier for you and to make you open your eyes and embrace what’s coming next, here are the things he does that actually show you are in a fake relationship which has no future. You’re just prolonging the inevitable.

Where there is no communication, there is no love. Why? Because, if your partner doesn’t talk to you, if he doesn’t share his thoughts and his feelings with you, how are you supposed to know this person?

Maintaining communication doesn’t mean you have to call each other or text each other every second but when you get home from work, it would be great if you talked a bit about how your day went or how you’re feeling, just to keep up with things.

Otherwise, how would you know what’s going on in your partner’s life? Communication is the key. If he doesn’t talk to you, you won’t know what’s bothering him.

And bottling up feelings inside can only cause problems in the long run.

2. When he leaves, you don’t know where he’s going

He is being a bit secretive about where he’s going and when he’s coming back. I’m just saying, you are not compiling a police report and you don’t have to know all the details but it would be nice if he’s going out just to tell you where or with whom?

It’s not that you have trust issues, but if he acts this way all the time, you’re going to develop trust issues. And once you stop trusting him, there is no point in staying in the relationship.

The fact alone that he doesn’t want to tell you where he’s going is very suspicious and it can only show you that he doesn’t take your relationship seriously and probably isn’t even planning on staying for much longer.

You’re just a backup plan until he finds something better. That is definitely a fake relationship.

3. He’s all over you in public

You would think that a PDA is actually a good thing but like everything else, too much of something can be very suspicious and harmful.

If he is all over you in public and you’re playing along with his charade, then you have a problem. He is probably trying to prove to others that he is happy and by doing the same you’re just helping him.

When you get home, he’ll turn into the cold shadow that he was before. That is anything but a real relationship.

You don’t have to prove your love to anyone. If he has the need to do it excessively, then you’re definitely in a fake relationship.

The reasons for maintaining a fake relationship can be numerous but whatever they are, do yourself a favor and leave immediately, before you get seriously hurt.

4. You’re always the one starting the conversation

He will only talk to you when he needs something from you. That means he is aware of what he is doing and what kind of relationship he is in. It means that this kind of scenario works for him at the moment.

Don’t let him use you and just break it off. You’ve tried enough and you’ve started so many conversations which were all a one-way street. You’ve pulled the words out of him and it never ended well.

That man simply doesn’t want to open up to you. Maybe you’re not that interesting to him, or he just has different plans. Anyhow, you are the victim here and you definitely have to leave this fake relationship.

5. The only thing you have is s*xual chemistry

Don’t get me wrong. Sex is great and it’s super that you have that kind of chemistry between the two of you. But there is something you shouldn’t disregard so easily. Sex is great but it’s not the most important thing in a relationship.

If the only thing you have left is sex, then you’re in a fake relationship. You can’t just communicate through passion. For a true relationship, you need much more.

At the beginning of a relationship, sex plays a great role in your lives. You’re just getting to know each other and you’re exploring each other, but after some time, things have to grow into something bigger and more serious.

If they never do, that relationship is set to fail.

Your relationship is actually boring. You’re stuck in a rut where you do one thing again and again. You are stuck in a routine which is anything but fun or creative. Relationships have to be fun and turbulent.

If this is lacking in your relationship, it means that the relationship you’re in is not a real one. It’s a try which was worth it for a while but it failed.

When you love someone, you’ll show him that by letting go from time to time. Even if you think you’re one hundred percent right, you’re going to listen to your partner.

He never does that. He believes he is right and even if you are actually right and not him, he is not going to admit it. His ego is just too big to accept he made a mistake.

That is not a relationship. That’s a crock.

Powerful Cosmic Energies Kick Start 2020: This Is What The Stars In January Have To Say

Your Tree Zodiac Sign – According To Celtic Druid Astrology in 2020

TRUE DIFFERENCES BETWEEN BEING IN LOVE AND LOVING SOMEONE

If You Love Me Despite My Anxiety, Know This

From Most Confident To Most Insecure: See Where Your Zodiac Ranks

You Are Not A Man, You Are A Mistake

ThoughtCatalogs - June 15, 2019 0
I have tried to change you but the harsh truth is that I always make bad decisions when I am in love. I don’t...