It’s our normal human tendency to always look for the good and the interesting sides of our zodiac signs. Knowing the positive attributes gives us confidence and makes us believe we are good people (if not better than the rest). But for every Ying, there is a yang, so there are attributes which are not so attractive to talk about in each of the signs as well, why do we conveniently erase that while evaluating person’s natural behavioural traits? In fact if we delve a bit deeper into the murky side of the sun signs we would be making perhaps a better character analysis of everyone don’t you think? Take a look at the every Zodiac signs darkest secret.

Aries Zodiac: Hate It When They Don’t Get Their Way

Aries are known to lead the way and run the show. They have this Inherent feeling of being natural leaders and don’t take orders well because they prefer it the other way around! As a result, tantrums, mood swings and stubbornness can be expected of them when things do not go according to their wishes. When faced with a dilemma, aries can be impulsive, making quick choices which may not provide long-term results You can say they are kids who refuse to grow up.

Taurus Zodiac: Too Materialistic Than They Pretend To Be

Taurus individuals are creatures of comforts and have a high materialistic streak in them. Though when we all think of a bull we think of their stubbornness, which also has some defining shades in their personality. They love guiding friends but taking investment or financial advice from them may be risky as they themselves like to splurge on unnecessary items which they do not need, thus they might not be the best person to advise you in that sphere.

Geminis do not believe in the dictum of “do not judge a book by its cover”. They are fast to make judgments about situations and sometimes people. Needless to say, these rash decisions are most of the time inaccurate which inhibits them to make real camaraderie among people. Their tendency to brand a person on their first impression is not quite what we can call an admirable quality.

Cancers can be best described as unpredictable sun sign and are ultra sensitive sometime to harmless remarks and comments and sulk over it for hours if not days! They love to play the victim and create a great have-pity-on-me party all around them. They may try to fool you into believing that they are unaffected bunch of cool hippies but in reality, they are as shifty as tectonic plates!

Leo Zodiac: Needs Their Ego to be Fed Constantly

Majestic, charismatic and flashy are the keywords when it comes to describing the lion whether the one in the jungle or the one with the sun signs in your office cubicle. Similarly, in both the cases, they have a huge appetite (meat for the wild dude) and ego massage for the office dude. Yes, Leos have a huge pride to maintain and even if they project a rock star persona, they need to be constantly appreciated and complimented. The Darkest Secret of Leo is that one harsh word or criticism, even from the closest friend may mean the end of the friendship forever!

Virgos are very hard taskmasters and overtly critical people even to themselves! They are blessed with logical and analytical minds and always strive for perfection in life which is elusive. This insane pursuit for personal perfection and ideal life often makes them incapable of handling the failures which comes in their wake making them over critical and judgmental about their own selves and abilities and therefore they are seldom at peace with themselves.

Libras hate confrontation and always try to initiate peace amidst warring friends and families. In fact, they take their role of a peacemaker so far that they end up being a doormat themselves. They often bend backwards to accommodate people and have a hard time saying No in fear of losing a friend, as a result, they always suffer silently as they are routinely exploited and taken advantage of.

Scorpios Zodiac: More Suspicious and Jealous Than They Let On

Scorpions are champion busybodies. They love to poke their nose in other people’s matters and derive a great satisfaction in indulging in gossip. But this is just a façade, to protect their privacy and inner emotions. They are so vulnerable that they are always digging up gossip just to hide their insecurities and jealousies from others. Since they do not inherently trust anyone, they assume the whole world the same as them, so they are adept at hiding things…always!

Sagittarius Zodiac: They aren’t as Free-Wheelin’ as They Appear to

Sagittarius are riotous and moralistic people. They have their own set of beliefs which they zealously guard.  The world is either black or white for them with no scope of grey. Although they have a true friendly spirit and are genuine well-wishers of the community as such, but only if they have likeminded people around them. They do not appreciate an alternative point of view and arguments instantly become dismissive. They can be judgmental if they do not agree with different perspectives which are unfortunately the case most of the time.

Capricorn Zodiac: They are More Emotional than They Prefer You to Know

Capricorns are perhaps the most rooted and down-to-earth sign and considered overtly practical to the extent that they are considered void of human emotions. Frigid and robotic are usual terms of endearment used for a Capricorn. But that’s the catch; they are an emotional bunch of softies only in front of their nearest and dearest ones. They can be passionate lovers and loyal friends (who can take a bullet for you too) for life but only if you pass through their exterior rings of ice and rock first before you reach their core.

Aquarians are the ones with the big picture always! Starting from school to their workplace they will come up with their own projects that would be highly ambitious and they really believe that they are here to change the world! Their lofty ideas about everything leave others wary and confused and therefore they feel left out and misunderstood most of the time. Their complex ideas make it hard to be social and therefore they end up isolated and intellectually alone.

Among the zodiac signs darkest secrets, Pisceans are perhaps the only dreamy and detached sun sign among all; they surely indulge in fantasy and dream of a utopian life for everyone. Everything is staged in life and they float about the world as if they are in their own dreamland. So when reality strikes and they need to make decisions or commitments, they are flabbergasted. They are extremely emotional and they would like to remain in their bubble as long as they can without letting reality to burst in. 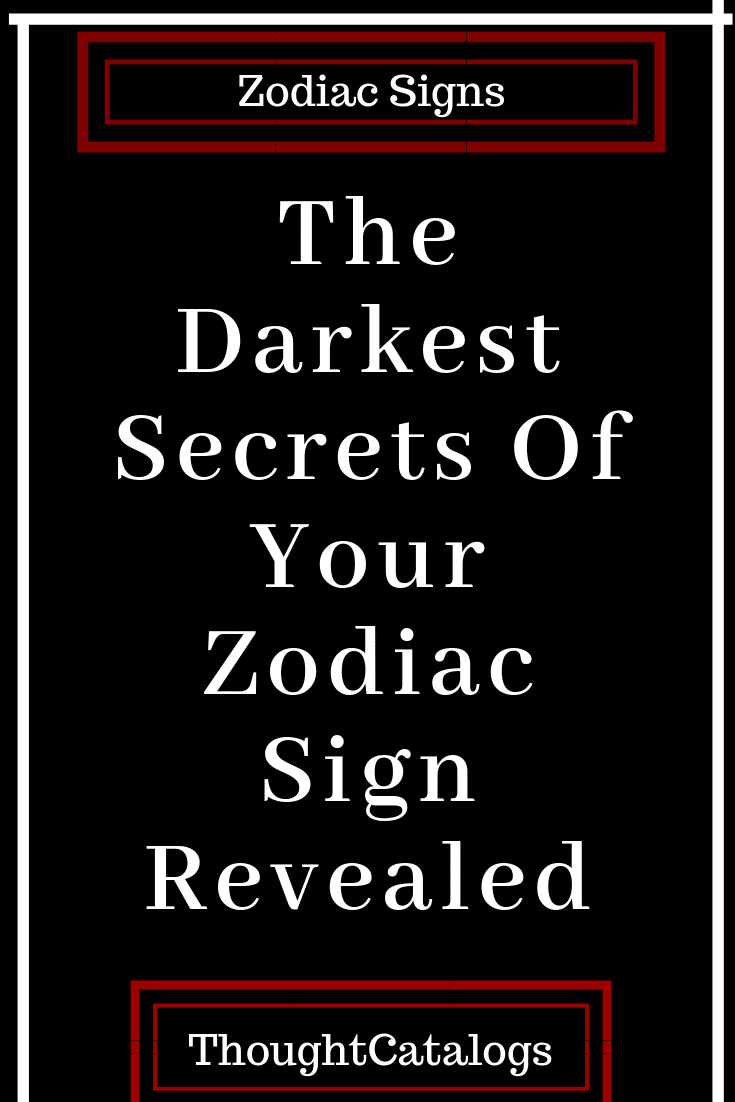 How Easily Manipulated Each Zodiac Sign Can Be In A Relationship