I know that from this point of view, you’re convinced that you’ll love your ex forever.

You’re desperate and think that he’ll be stuck in your mind and that you’ll want him to be yours until the end of time.

Actually, it’s like you’ve already given up on the idea that you’ll ever get over him. You’ve learned to live with him existing somewhere in the back of your head, haunting you and reminding you of all the pain you went through and are still going through.

It doesn’t matter what really happened—whether he was an abuser, if he cheated on you or was a narcissistic manipulator; the bottom line is the same—you’re crying over a man who didn’t love you enough.

Over a man who never should have had a place in your life in the first place and who didn’t know how or didn’t want to treat you the way you deserved.

However, don’t you worry because you’re not the only one who is going through something similar. Despite your pessimistic predictions, this awful feeling won’t last forever.

And you know why? Because sometime soon, you’ll grow up, you’ll mature and you’ll leave this toxic man in the past, right where he belongs.

It is completely irrelevant how old you are or how much life experience you have—the fact is that deep down, in the privacy of your soul, you’re still just a kid.

You might appear to be a tough and strong woman but as long as you don’t overcome the people from your past, including this man, it is clear that you haven’t emotionally matured.

However, it will come to you sooner than you might think. One of these days, you’ll wake up and all of a sudden, you will realize you’ve outgrown him and everything you felt for him.

When this happens, you won’t be able to believe how many tears you’ve cried for this man. It will sound incredible that a jerk like him was the cause of all of those sleepless nights, self-doubts and heartbreaks.

You’ll consider yourself foolish for giving him so much space in your heart and head. You’ll laugh at yourself for ever caring for someone like him and you’ll wipe him out of your memory for as long as you breathe.

Just like that, you’ll start seeing this man for who he really is. You’ll stop idealizing him and you’ll finally understand that he was never worthy of your love and attention.

You’ll face the harsh truth—this guy never knew how to love you and he would never learn how to do it properly, no matter how many second chances you were planning on giving him.

And you’ll be mature enough to lose the ability to love the ones who don’t love you back.

One of these days, you’ll understand that you never needed his half-hearted love. That he never gave you the attention or the devotion you were looking for and that you would forever feel the lack of his emotions, even if you had stayed by his side.

When you grow up for real, you’ll see that you’re way better off without him. That he would never make you happy and that you actually won in life when you lost him.

After some time, you’ll realize that love should never hurt you. That it doesn’t have anything to do with mind games, chasing or playing hard to get.

When you’re ready, you’ll outgrow your ego and the feeling that you’re not worthy just because one guy didn’t love you enough.

You’ll outgrow all those people who didn’t appreciate or respect you enough, including your ex. You’ll learn not to waste your effort, time and energy on the wrong people.

You’ll realize it’s much better to save your love for the one who will cherish it like the most valuable possession instead of throwing it at the feet of a guy who took it for granted.

Most importantly—when you finally outgrow the need to be loved by someone who simply doesn’t give a damn about you, you’ll learn to love yourself.

You’ll see that the relationship that you have with yourself is the only one that matters and the one you should take care of the most. 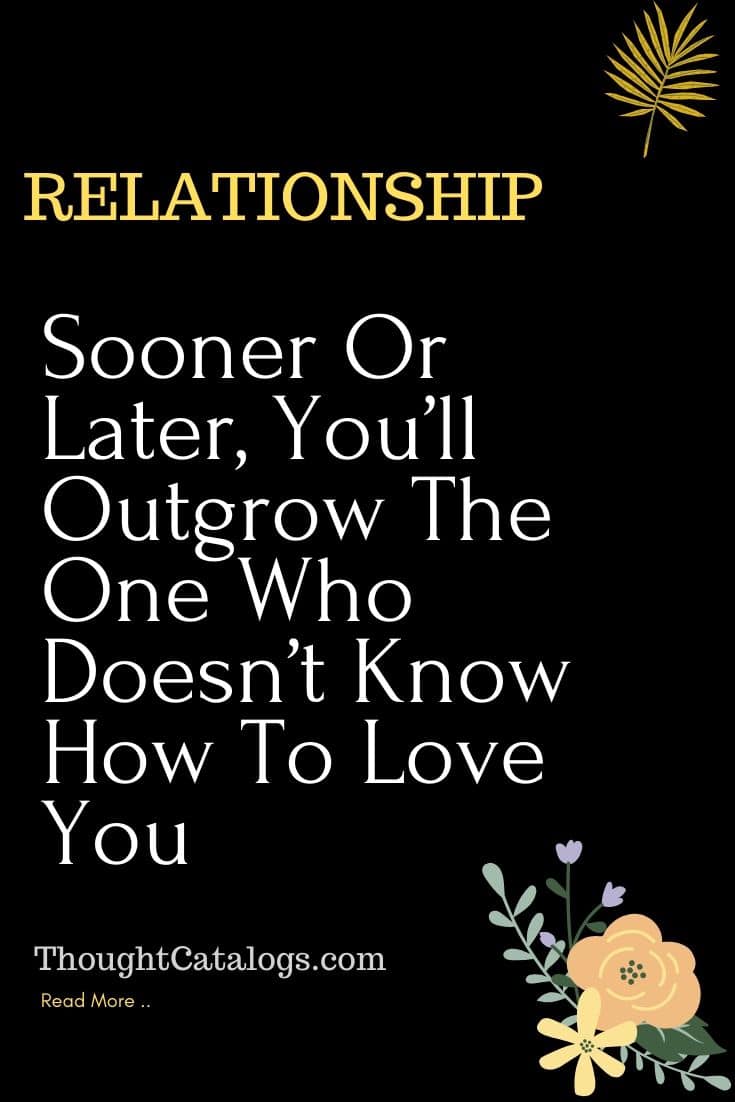