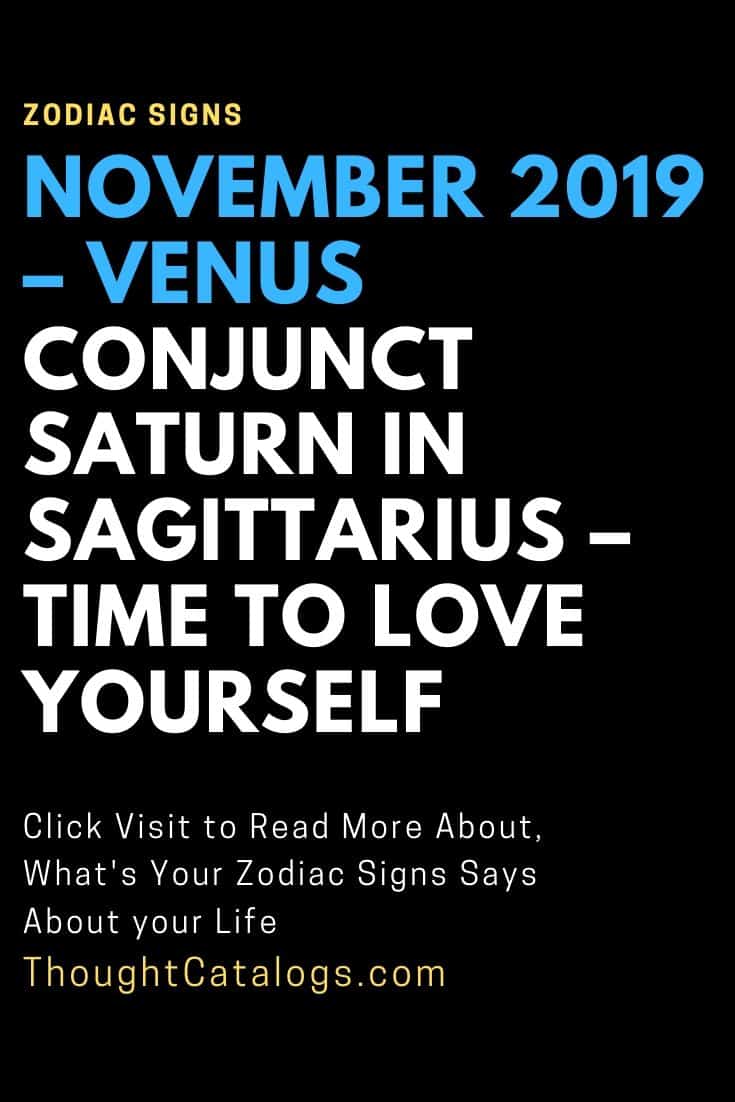 The first days of November 2019 are home to a beautiful passage related to our sister planet (from the energy point of view), Venus. From October 19 Venus is in Sagittarius. Also Saturn, symbol of the direction of arrival from the past, keeper of memories and talents,  is transiting there.

On October 30, the day of the intense New Moon in Scorpio conjunct the Lilith, Venus and Saturn were perfectly combined at 14 °. Now Venus is continuing its run but the connecting aspect remains in place even throughout this week (until at least Saturday, November 5).

Compared to all the violent emotional waves suffered these days, Venus and Saturn were an anchor in the present, letting prevail a state of consciousness that drove the vision beyond failure, beyond despair. Breaking down in the middle of the storm is a priceless  feeling  and is the great gift that is done there now, the right of inner expansion tool to address growing times for disabled cores. It’s the proof that when the test comes, we are also provided the key to open the doors of consciousness where we were not so far been able to pass.

The key given to us by this aspect is wonderful and allows us to gain a position in relationship with ourselves from which we are definitely not going back. It is about falling in love with ourselves, with who we are, the shape of our body, because the history that we have created in this life and even before in some kind of other existences, could only provide such a container, with the perfect  features to accommodate the precise quality of our light.

Falling in love with ourselves means letting go. Opening our heart and breathe without feeling the need to apologize. Fall in love with ourselves means putting together a series of “yes-es” which send us to the manifestation of what we’ve always imagined. For many it also means living experiences that synchronize in putting in our path experiences that allow us to remember who we are.

We can feel a great strength resulting from this meeting. Maybe we do not know the exact details, but somehow we get back on roads already passed to take back what is ours, to remember. It is possible meeting with people we already know, by some kind of realm or other  dimension, it does not matter! The meeting also serves in this case to align with an experience that gives us strength and inner integrity. The aim is to recover a state of being that stimulates us to manifest the soul’s mission, which is the teaching of the Saturn transit between 2015 and 2017. His conjunction with Venus opens a huge window of opportunity these days , especially at a time of powerful exact conjunction of the Moon and Lilith (October 31, Samhain, they were both at 18 ° Scorpio).

Venus, the Moon and Lilith are the three faces of the Feminine in her wanting to be reconciled with the Force of Male. It ‘a Female gritty, little inclined to sentimentality, but leaning to the reconstruction of an identity that both projects  to the new matter from the past that you came from. Falling in love of ourselves  here becomes awareness of our own possibilities, no more excuses, nor delays.

Life is now, Venus in Fire (Sagittarius) and Saturn becomes inner security that bypasses fears and trepidations. Having in our back multiple lives of extreme experiences (Moon and Lilith in Scorpio symbolize the past Venus in Sagittarius)  that despite of repression moments, have tried the best for the generation, what does Venus (which means us) have to lose, but an occasion of being herself to the end?

But not as a warrior. All contrary. Lovely  accompanying herself to manifest in this here and now. And if there is a fear, let look at it. It may be a cloud remained sluggish from the past or a thought from that belongs to someone who came before us. But  do we really not want to live because we think this is more important than ourselves?

9 Signs You Have The Crazy Kind Of Love

10 Brutally Harsh Negative Personalty Traits You Definitely Have, Based On Your Zodiac Sign

Here’s What Kind Of Fuckboy You Always Attract, Based On Your Zodiac Sign