But there are some things you should avoid expecting him to do with you. Instead, you should ask your friends to accompany you or simply do it on your own but never make your boyfriend do these 8 things with you and you’ll see how much your relationship will improve.

1. Dragging him shopping for the perfect lipstick color to match your outfit

Every woman understands the troubles of finding the perfect lipstick for every occasion or when you’re indecisive about the right color tone. But explaining this to your boyfriend is a mission impossible, so why would you bother bringing him with you when you know that the make-up section for him is more like being ‘Alice in Wonderland’?

Your third cousin’s son’s birthday really is a cause for celebration but have you asked yourself if your boyfriend even knows his name (or your third cousin’s name)? Maybe he genuinely doesn’t like celebrations but how can he reject you when you’re convincing him that he should accompany you?

3. Getting a root touch-up at the hair salon

Similar to shopping for make-up, getting a root touch-up at the hair salon is for guys like the biggest enigma they’ve ever witnessed. If you ask him if he notices that you need a root touch-up, the first thing he’ll do is ask you what the hell ‘a root touch-up’ is supposed to mean.

And if you tell him that you’ll need an hour or so for it, he’ll think that you’re joking. Do you really want to watch him there sweating and going through the same hair magazines on repeat? Do you really want him to lose his mind while still trying to decipher what the thing about your roots is and why it lasts so long? I didn’t think so.

If you ask any man to watch ‘Fifty Shades Darker’, their reply would be: “I’d rather walk forty miles barefoot through the darkest, snowy alleys and fight bears and other animals than watch those two trying to make sense of nonsense.”

It’s like stabbing them right in their heart and telling them to keep bleeding until the movie finishes. ‘Fifty Shades Darker’ and other movies that men are appalled by are best to go see with your friends or alone because if you take a man there, he might fall asleep and start snoring (which would be a little bit embarrassing).

It’s like taking him to the candy store to choose candy for himself and not giving it him to eat until he gets home. But when you already know what’s on the menu, it’s not that interesting anymore, is it?

6. Forcing him to try things he’s not interested in

Forcing him to try things he’s not interested in could backfire and create more damage than fun. And it’s definitely not worth it.

7. Going to the gynecologist

Let’s say that he’s accepted to accompany you to the gynecologist for a regular check-up and now he’s there awkwardly smiling at others, impatiently waiting for you to finish so that he can forget everything he heard or saw while he was there.

Words like gynecologist, hair salon or beauty salon simply don’t exist in a man’s dictionary. They are things they’re even afraid of saying out loud, let alone visiting. So, have mercy and leave your man drinking beer with his buddies and do what he’s best at and that’s being a man.

8. Dragging him on a girl’s night

Do you think he’ll enjoy listening to your latest updates about PMS, your new dieting regimen, babbling about cramps and other culprits of a woman’s mood and well-being? Dragging him to what is evidently a girl’s night is equal to telling him to commit suicide and pretend that he’s still alive. Spare yourself and him the trouble and just don’t do it. 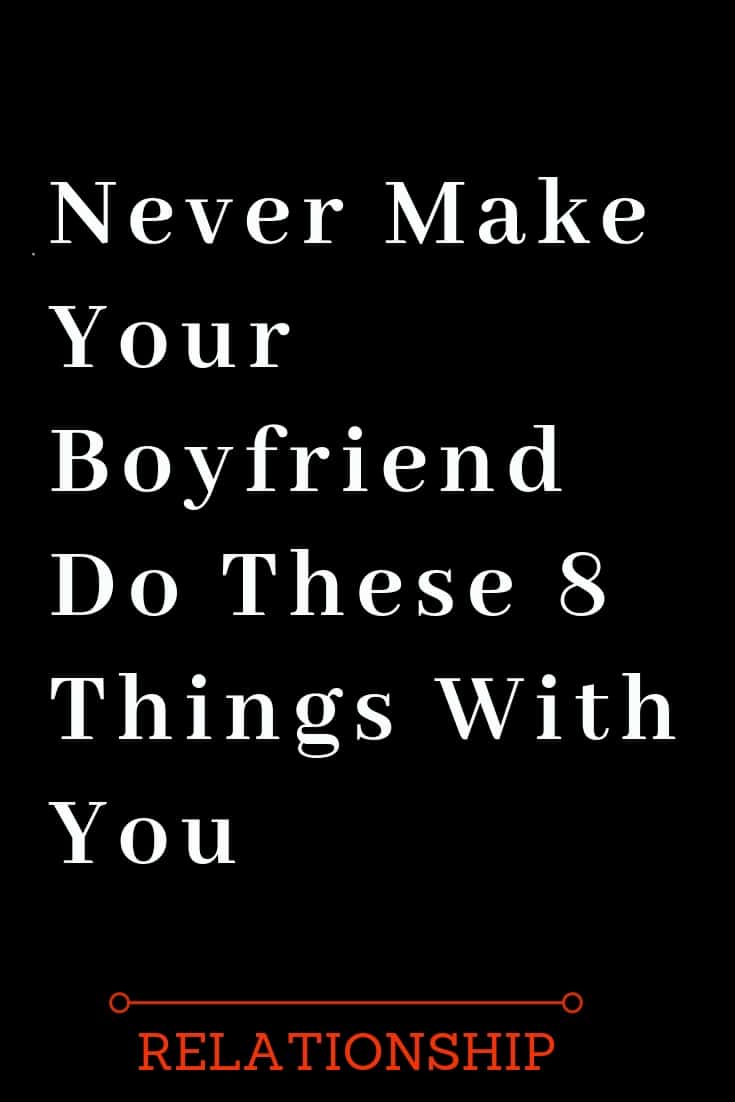 6 Things That Happened When I Left My Almost Relationship

Nsa Relationship: What It Is And 13 Golden Rules To Follow