The exception is that zodiac signs are calculated a little differently in Chinese astrology and are symbolized by animals rather than star constellations. So today we are going to sort that out a little bit.

What is your Chinese zodiac sign? And, since we are talking about love compatibility today, who is your best Chinese zodiac match? Let′s have a look!

Each of these systems is but a tool. Use them as guides and for entertainment only, and don′t make life-changing decisions because all of a sudden you found out your partner is a rat. A rat in Chinese astrology is a good thing!

Even when we come across matches that don′t seem compatible, we find information about our partner’s strengths and flaws that we can use to understand them better, understand our relationship problems better, and ultimately, improve our relationship.

Look for the year you were born, and the animal that is listed beside is your Chinese zodiac sign! If we missed yours, let us know!

WHAT IS YOUR CHINESE ZODIAC LOVE COMPATIBILITY?

If you were born in the year of the rat, your life has embodied the skills and qualities of the rat. You go in and out of long-term relationships but you are ambitious and nothing will stop you.

You may have challenges with a rabbit, rooster, or fellow ox, but you make it work. The year of the pig, dog, and dragon may seem impossible to you but you are committed to figuring it out together.

You are best to stay away from the horse or the tiger unless you have love compatibility in other areas, or don′t mind picking up the speed in life with them on occasion.

YEAR OF THE TIGER:

Like any tiger, you are caring but aggressive and you go after what you want. You prefer to mate for life too. You are great matches to anyone born in the year of the pig, horse, or dog, but you will find challenges with the snake, rat, and dragon.

Fellow Tigers also are a little too much even for you, but you may find a way to have peace in the kingdom if you work it out and take turns being the leader.

• YEAR OF THE RABBIT:

If you are born in the year of the rabbit then you are just like all rabbits, cute, cuddly, impossible not to love. You may be a little shy but you find sparks fly with the goat, pig, or dragon.

Challenges in love compatibility begin to rise with the more Wiley zodiac signs like a monkey, dog, rooster, or even your fellow rabbits.

A tiger will make you feel like prey and is best avoided unless you find a way to make that work, and you and the rat will be in constant competition. It could work if you are willing to work it and let the rat win on occasion.

• YEAR OF THE DRAGON:

Dragons are fearless and passionate and they have a big presence, as do you. And you want this energy in your romantic affairs. So the competitive animals like tiger, horse, and fellow dragons are really going to burn out your romantic fires.

Thus you are most compatible with those born in the year of the snake, monkey, or rabbit. The rat and the rooster will present challenges but won′t have you feeling like you are competing for all of the time like dragons and tigers will.

YEAR OF THE SNAKE:

Being born in the year of the snake you are highly misunderstood as being Wiley and snakey, but that′s only part the truth. That side only comes out when it needs to.

Overall you are pretty calm and just going with the flow, which makes you a great match for others like you, such as those born in the year of the ox, dragon, or rooster.

The rabbit is a great relationship but you will both have to work at it, and you will find frustrations with the pig, dog, or horse unless you both do your part.

• YEAR OF THE HORSE:

You are one of the more affable Chinese zodiac signs, and as such you get along with almost everyone. You like your nice things but you are competitive and ambitious, but your sense of humor is a bigger play for you.

You find sparks flying with the tiger, goat, and dog. Those born in the year of the dragon may be too showy for you, but you find a way. The biggest challenges in love would come from an ox that likes life slower, a rat, or the monkey.

And fellow horses may be too showy even for you. You want the spotlight. If you can share it however it would be a match made in heaven.

If you were born in the year of the goat, you are both a social butterfly and a loner. You just like your nights in, and prefer parties at your house than elsewhere.

Your best matches in Chinese zodiac love compatibility are others like you, such as the horse, the rabbit, the dragon or the pig. Those born in the year of the monkey, snake, ox, or rat will present challenges.

You′ll wonder why you even bothered with a tiger, rooster, or dog at times, but at the end of the day if other love compatibility variables check out you are the happiest goat in the land.

YEAR OF THE MONKEY:

If you were born in the year of the monkey you are in for a fun love year indeed. Your best Chinese zodiac love compatibility matches will be like you, playful and always sociable.

You do very well with the ox or the dragon, and you find great satisfaction with the goat, rabbit, and other monkeys. The snake, pig, dog, and rooster are going to make you work for love.

And the horse and the tiger have far too much energy for your small needs. But if other love compatibility variables pan out you will experience deep contentment as you usually find a way to be happy no matter where you are or who you are with.

• YEAR OF THE ROOSTER:

Those born in the year of the rooster have a lot of energy and so you don′t often put love on the front burner. You prefer matches that have the same kind of freedom in their life, but you do want commitment.

The snake and the pig are the most compatible Chinese zodiac signs for you as they appreciate where you are coming from. You can make it work with a dragon or ox, but you will both need to come halfway sometimes. The monkey, horse, tiger, and rabbit may put you off with their preferences, as you are more social.

But you find a way if you really want to. Fellow roosters are often too much for you, but so long as you both bring a balanced approach to love it works. Don′t push it too hard if it′s not though, as you really would be happier elsewhere.

YEAR OF THE DOG:

You embody the qualities of a man′s best friend, and are loyal, a sincere heart, love unconditionally and you also like taking the lead. You also like the great outdoors! You are looking for a match that appreciates the same, like a horse, pig, or tiger.

The rabbit could be a good friend but romance will seem forced, as would another dog or a monkey. The dragon and the ox are complicated matches for you, but if you pass off the lead then it′s golden.

The goat, snake, and rat are going to be a lot of work for your unconditional love, so just make sure they have earned it.

Those born in the year of the pig model the qualities of the “happier than a pig in mud” mindset. You are pretty easy to please and your Chinese zodiac love compatibility reflects that. You get along with everybody. So you have a lot of perfect matches.

The dog, rooster, rat, tiger, pig, rabbit, and goat will all be great matches. You may have some issues with the snake that is better moving on from, and the monkey, ox, and horse aren′t your cup of tea but you find a way to make everybody happy in the process. Of all of the Chinese zodiac signs, you are the one that makes everybody happy.

And there you have it. Your first primer on Chinese zodiac love compatibility! How did you fare? 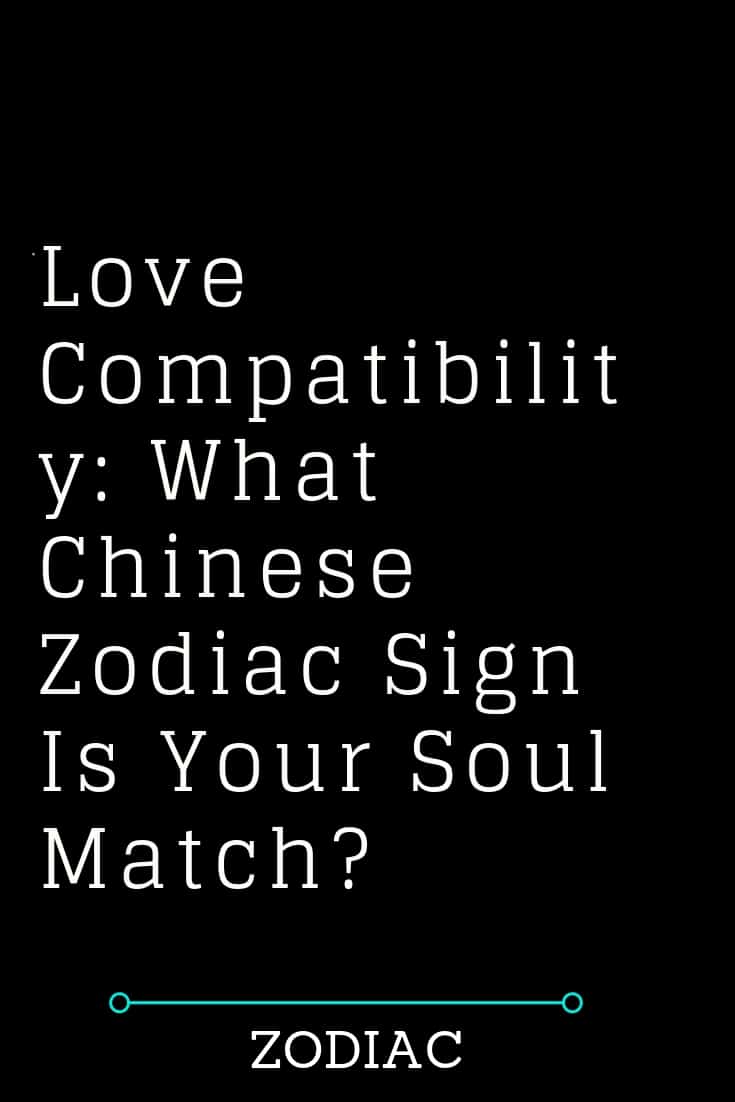 Venus In Pisces: What Does It Mean For Each Zodiac Sign?