The royal family is made up of individuals with their own sun signs—just like us! But anyone who follows the Mountbatten-Windsors closely knows it’s not about who they are but what they represent for the commonwealth. The crown is a symbol of the strength and dignity of the U.K. (and a source of modern-day fairy-tale glamour for the rest of us), and each of them inhabits a public role we can analyze according to astrology. See below for each zodiac sign if it were a member of the royal family.

Aries are the babies of the zodiac, so we’re opening with the O.G. of the next royal generation: Prince George. Aries energy is all about vitality and attention-grabbing spunk—which we’ve witnessed time and time again. And this little one has shown an early aptitude for serving face to the camera. May his tiny reign continue!

It may seem like cheating to give the queen her own sign, but that’s how well she represents for the bulls. Her decision to wear white at her wedding 71 years ago literally changed how brides around the world dressed…forever. There are no trends with this queen, nothing fleeting about her, and so it is with the zodiac’s most stubborn denizens. Long live the Taurus.

These two are always seen together, usually in the most devastatingly cool fascinators. Geminis tend toward the unconventional, and these two like to make a splash wherever they go. They may not be literal twins, but they are a well-known duo, thus securing their Gemini bonafide status.

Cancers are deeply private people who can be quite protective of their innermost thoughts and desires. Prince Charles never took to the public eye in the same way Diana did, and he exudes that “stiff upper lip” quality perhaps more than any other royal—even when his personal affairs became headline news. Cancers have the softest and most sensitive hearts, so they guard them with the hardest shells. Just because we’ll never see Charles crack that impeccable composure doesn’t mean he doesn’t feel his feelings on the deepest levels.

Leos are the scene-stealers of the zodiac, and in 2011, there was no greater scene stolen than the royal wedding of Kate and William by Pippa Middleton. As maid of honor, she performed her role with a level of sparkle and polish—and an impressively toned body—that turned heads permanently in her direction. That effortless glow is as natural to a Leo as waking up with bedhead and smeared eyeliner is for, well, the rest of us.

Virgos and Tauruses are a famously compatible match, and he and Elizabeth have endured for decades. Unlike Tauruses, who tend to bring the gravitas in a couple, Virgos usually don’t mind taking a backseat, preferring to serve dutifully behind the scenes. Virgo energy is all about supporting the greater good or, in this case, representing a union as strong as the U.K. itself.

Kate Middleton is the model of uncontroversial glamour. Libras are the zodiac’s crowd-pleasers, and in her role as duchess (and eventual princess), Kate has managed to satisfy the public’s desire for modernity in its royal family while clearing every bar of propriety set by Buckingham Palace. Plus, her collection of coat dresses is truly without peer, a style credit that nods to the Venus influence of Libra.

The essence of Scorpio is longevity, and they tend to outlast their critics through sheer determination. While Camilla Parker Bowles began her royal tenure entangled in scandal, her marriage to Prince Charles has long outlived its controversy, and her place in the crown is secure. A Scorpio can start at the bottom (like fellow scorpion Drake says) and build their way to the top, and Camilla is sitting pretty in the castle she built (so to speak).

While every British royal travels the world, Prince Harry has a special affinity for spending time abroad. Such global wanderlust is characteristic of the Sagittarius, who loves to roam the world and explore other cultures. And because he’s not the crown prince, he’s able to exude a more relaxed royal vibe (and wait as long as he wanted to before getting married), à la the free-spirit centaur.

Capricorns are everything you could ask for in a royal: composed, dutiful, respectful of tradition and talented at managing fame (they were all born with an instinct for exactly how long to stand and wave). Prince William is good at his job, and has struck a remarkable balance between upholding the dignity of his position and sharing his warmth and sensitivity with the public in a controlled way. In other words, he’s a royal you trust as a figurehead and a family man, which is so Capricorn.

Meghan has staged no revolutions, and yet her feminist activism and (relatively!) daring sartorial choices have made her an iconoclast among the royals (the power suits are to die for, and not in a beheading way). Aquarius is the sign of individuality and politics, and Markle is bringing originality and grace to her post as the Duchess of Sussex. 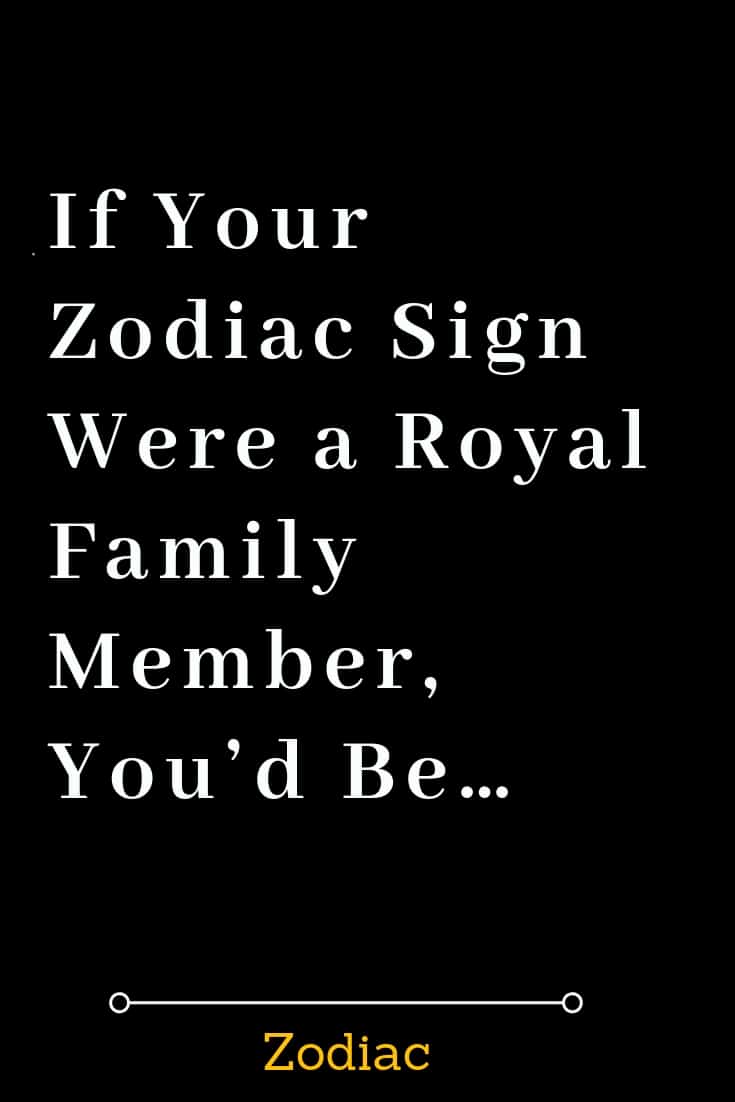 Ranked: How Into PDA Is He? Based On His Zodiac Sign

The Best Way to De-Stress for Your Zodiac Sign