If a guy you like is interested in you, he will do whatever it takes to win you over. Don’t comfort yourself with ideas he’s just a shy guy and that’s the reason he doesn’t chase you. That is just ridiculous. The truth, no matter how harsh, is that he is probably just not interested.

It’s better to settle this ‘dilemma’ once and for all. Get out of the bubble you’re living in because you’re only making it worse for yourself. Accept the fact that he is not that into you—and that it is totally fine. After all, not everybody is meant for everybody.

No man can resist not taking action when he sees something he wants. Men are like that. Men love to chase and if you caught his eye, he will not wait a moment longer and he will pursue you because he wants you.

No distance is big enough to stop a man from getting what he wants, when he really wants it.

You have to stop chasing wrong men! You’re only breaking your own heart and he won’t give a damn. It’s all the same to him. He will have a good time. He will lead you on and play with you for as long as he wants and when he gets tired of it, he will just turn around and leave. No regrets. Nothing. But you—you will be crushed and broken.

Stop falling for men who have to think twice whether they like you or not. Stop falling for men who constantly come up with different excuses for not meeting you. Isn’t it suspicious that every time you want to see him he has a ‘thing’? Either he is working or his family is in town or he had promised something to someone earlier. That is just not right. That is total BS!

A man who likes you and wants to spend time with you will leave everything and everyone just to be by your side, to look you in the eyes and to hold your hand. A man who wants to be with you will be constant. He won’t act differently when he is and isn’t around you. He won’t send you mixed signals and make you beg for his attention.

Ignore boys who want to make a complete fool out of you. Ignore those who don’t care, who only want something on the side. They are not worthy of your time nor your love. You have to save those emotions for someone who truly deserves them. You have to save your love for a man who will chase you and will never stop because he wants you more than anything in this world. Lay off the half-assed love. You don’t need it. You don’t deserve it.

Don’t allow yourself to be manipulated by someone not worthy. Don’t give him the time of day. Don’t let him play with your emotions and with your mind. Don’t let anyone trick you because you’re smarter than that. You know what you want and you know what you deserve. Do you really want an immature mama’s boy to come and destroy all that you’ve been working on your whole life? Keep your self-worth and keep your respect because you’re going to need it. Because there are so many battles and crazy adventure before you. Don’t waste your energy on someone who doesn’t deserve it.

You know what you’ve got to wait for?

Wait for someone who will understand that even you can’t smile all the time, that even you have to have your bad days. Wait for the man who won’t use your bad moments against you, someone who won’t take revenge because he is frustrated. Real men don’t do that, only boys do. Real men respect you despite the not so great things you do. Real men understand that life isn’t an easy game to play.

You deserve all of this and even more. Run away from one-sided love. Never run to someone you have to chase. He’s not worth it.

Believe me, staying alone is so much better than being in an ‘almost’ relationship, than chasing someone who plays with you. Staying single is healthier physically, emotionally and spiritually than getting your heart broken by someone who never truly cared for you, someone who will let you down because he wasn’t serious

about you from the beginning.

Stay alone because time will work in your favor. There will be a man brave enough to chase such a beautiful and strong woman like you. He deserves you. Wait for him. 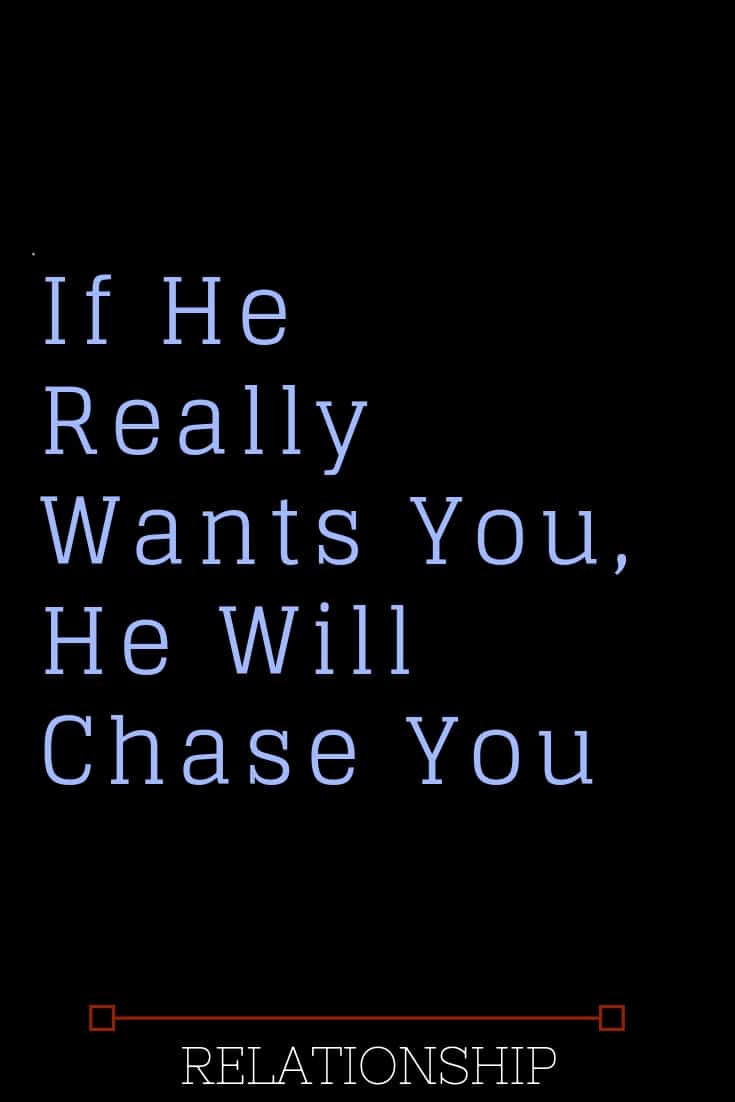 I’m King Tired Of Being Your Undercover Woman

5 Signs Your Partner’s Addiction To You Is Purely Physical