1. He makes you feel like you are the crazy one

If your guy constantly makes you feel bad for every problem he has in his life, chances are that he is not your forever person. In fact, he is nothing but a narcissist who just wants to abuse you, so he would feel good.

He doesn’t give a damn about you, but in some moments, he will act like the sweetest man of them all just to get what he wants.

2. He controls every move you make

If he wants to know where you are and who you are with every second, then he is a serious control freak. He doesn’t trust you, and he thinks that you will cheat on him whenever you are not with him. He thinks in that way because he would do that if he was without you.

And he forgets everything good that you did for him the moment you leave the house. I don’t need to mention that he will call you a hundred times until you come home just to check where you are.

Gas lighting is a method all narcissists use to easily twist their victims around their little fingers. If he convinces you that you are wrong and that he is right all the time, then something is wrong in that relationship. Even if you actually saw him cheating on you, he will try to convince you that you didn’t see it accurately.

He will use all means necessary to play the victim or hero and to blame you for everything bad that happens in your relationship. A guy like this doesn’t feel any remorse for doing this, and in fact, that is the only way he knows how to function in a relationship.

Don’t let him get away with his abuse just because he doesn’t use his fists. Sometimes, emotional abuse can be far worse than a physical one. Wounds on your body will heal, but the words he says to you will always be engraved in your head.

So, if he uses tricks and tactics to make you stay with him and if he plays the victim every time you say you will leave him, you should know that you are dealing with a serious narcissist and that he won’t let you go just like that. So, as soon as you see that something is wrong at the beginning of a relationship, run as far as you can.

If your guy treats you badly throughout all your relationship but only for a short period of time he acts like the world’s greatest partner, then he is using one of a narcissist’s favorite tactics also known as love bombing. He deliberately gives you all his love just so you could become addicted to him.

And in those moments he acts badly toward you, you will still stay with him because you are waiting for another dose of his love. But you should know that he is incapable of love and what he gives you are just the crumbs from his table. He pretends to be someone he is not because he doesn’t want to lose the only person who would do anything for him.

6. He interrupts you whenever you want to express your opinion

If you are in a relationship with a guy who turns every conversation to himself and is not letting you express your opinion, then you are dealing with a serious narcissist. He does that because he can’t stand when you are in the spotlight, and he will do anything to make himself feel good.

Interrupting you means that he doesn’t respect you and that he actually doesn’t give a damn about you. He just cares about himself, and he wants to feel good by making you feel bad.

7. He acts like he is the dominant one in a relationship

Besides the fact that he doesn’t let you say what you think, he takes all the rights in your relationship. He makes all the decisions because he thinks he is better in that than you are. He never listen to what you have to say, and he doesn’t care about your feelings at all.

He wants to be on top all the time because that is the only place he feels safe. He will even hurt you or make you feel bad just so he would feel good. He doesn’t like when you are happier than him because he has a twisted idea of love.

A narcissist is someone who can’t feel empathy toward others. If you see that your guy never understands your problems and your sorrow, chances are that he is just a narcissist who cares only about himself.

You should know that a man like that can never give you the love you deserve, and with him, you will never feel peace within. He will just abuse you in all possible ways. He will suck you dry and in the end, abandon you. And the worst thing is that he won’t even feel bad for doing all that. 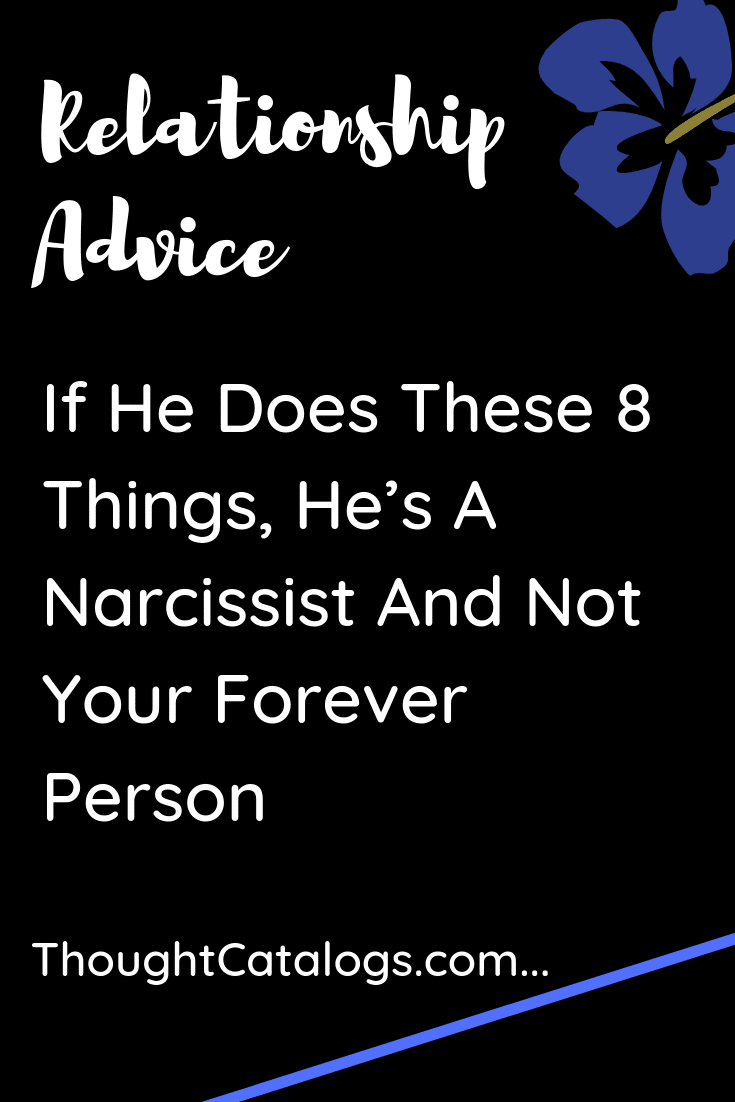