The second you feel like breaking up with your partner, you do it. You don’t think twice. Instead, you sever the relationship in the most immediate and effective way possible. Impulsive by nature, you’re likely to end things in the middle of a big argument or the minute someone else catches your eye. You’re also not likely to lie for the sake of their feelings; you’ll be brutally honest and tell them exactly why you’re leaving them.

If you break up with someone, you’ve likely been thinking about it for a very long time. It’s hard for you to give up on a relationship you’ve invested so much energy into and you don’t come to your decision easily. However, when you have made up your mind, there’s no going back. You’re willing to have a long talk with your partner when ending the relationship so that you both are able to leave with a sense of closure.

Your break-up style is a long and drawn out process. Because you hate hurting people’s feelings, you tend to break up with your partner a little bit at a time, slowly letting them know that you’re ready to move on. You’re also likely to go back and forth on your decision, ending the relationship at night and then giving your partner false hope with a text in the morning. In your world, it’s not uncommon for one relationship to overlap with the next one.

When you’re breaking up with someone, you’re likely crying even harder than they are. This is because you never really want to break up. You’ve probably tried so hard to make the relationship work that by the time you end things, you’ve reached your wit’s end. You’re always willing to work through problems, so if you’re actually the one initiating the break up, it’s probably because your partner mentally dropped out of the relationship a long time ago.

Your break-up style resembles a dramatic scene in a movie. You make a big show of things so that the heartbreak is forever seared into your partner’s memory, especially if they did something to deserve it. You don’t wallow in misery after the break-up, either. You get out there and indulge on your new status as a singleton, making a point to show off just how much better off you are now that they’re out of your life.

Before you break up with someone, you’ve already analyzed every single pro and con to the decision. When you let your partner know that you’re leaving them, you explain to them clearly and rationally why you’ve decided to end things. It’s not uncommon for you to write a long letter explaining the break up or give them a speech with far too much explanation. You’re also not known for remaining friends after a break-up. When it’s over, you believe the best thing to do is move on.

You absolutely hate confrontation so it takes you a while to finally break up with someone. You’re secretly hoping that they’ll just dump you first so you don’t have to. However, when you do decide to do it, you’re known for being so nice that your partner might not even realize you’re breaking up with them. You’re also known for moving on extremely quick and you’ll probably be involved in a new relationship before you know it.

It’s extremely and ridiculously hard for you to let go of a relationship. You get so fixated on someone that you’ll allow the relationship to continue, even if it’s become toxic. It’s usually when your partner does something completely and utterly unforgivable that you finally end things. And you don’t just end things… that would be too easy on them. You make it your mission in life to get revenge and make your ex suffer.

You have such an insatiable desire for freedom that you’re known for leaving things open-ended in a relationship so that a break-up never needs to be that difficult. You’re also known for phrasing your break-up as simply needing “some time apart,” just in case you feel like returning to them later. While it’s tough for you to agree to being in a committed relationship in the first place, you’ll never abandon someone completely. You’d love to remain friends with your ex if you can.

When your mind is made up on a break-up, nothing in the world can reverse your decision. You end things in a clear, direct manner that severs the relationship in the most efficient manner possible. You’ve likely already packed up your lover’s things and separated your phone plans. You want to get it over with as quickly and sharply as possible, holding your emotions together until you’re finally alone, where you can mourn the relationship in peace.

You’re the type of person who wakes up one day and realizes that you’d rather be alone. Your ideal relationship would be one where you still feel single, even if you’re not. This is why the moment you feel like the relationship is tying you down or compromising your values, you’ll remove yourself from it. You’re not likely to contact them ever again. In fact, your ex will be left wondering if you even existed in the first place.

You will never, ever stop caring about your partner. This is why the decision to end your relationship did not come easily and you hope from the bottom of your heart that you can still be friends. Sometimes, however, you forget that remaining friends makes the break up much harder on you both. You understand that two people can love each other but still not be right for each other, which is why you also rarely harbor resentment toward an ex. 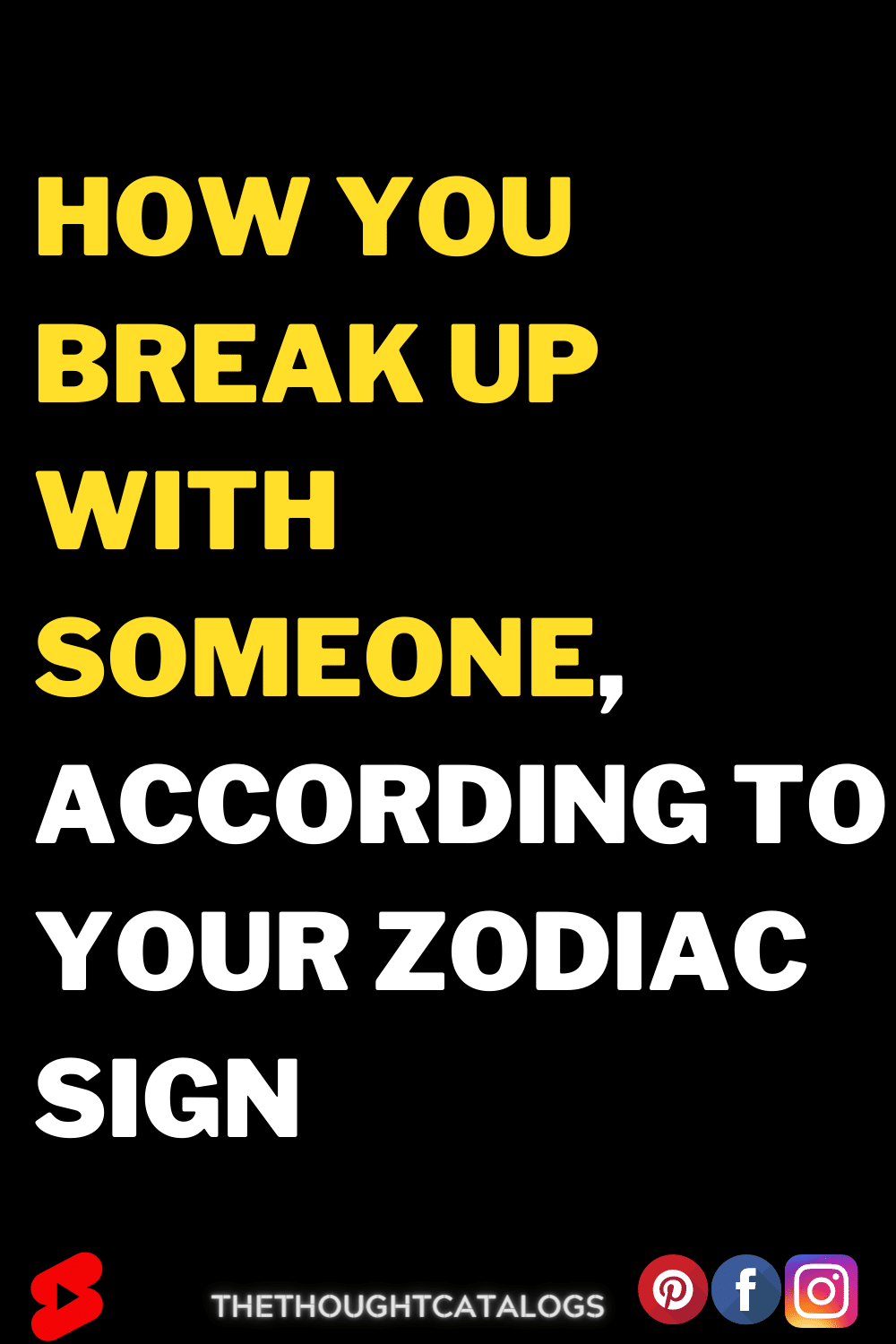 The Type Of Boyfriend You’re Not Meant To Marry, According To Your Zodiac Sign