Whether you’re in your first relationship or believe that one is on the horizon, chances are you’re wondering how things will go.

If you’ve got questions, we’ve got answers. Just scroll down to your zodiac signbelow to find out how you act in a first relationship.Related: These MEAN GIRLS Quotes Make Fetch Captions

Aries is an excitable and passionate sign that doesn’t like to do anything halfway. In a first relationship, they’re eager to discover what it means to be part of a couple and learn a few things about themself along the way. They see their relationship as an adventure with high stakes, and the partner of fiery Aries will need to be ready for all the highs and lows that come with that.

Taurus is known for being dependable and endlessly loyal. On the surface, these may seem like entirely positive traits, but they can be dangerous when someone hasn’t actually earned their faith yet. Sometimes they can be too trusting, letting their new S.O. get away with everything and letting dishonesty slip because they think that’s what loyalty is all about. However, Taurus is also discerning, so this behavior won’t last long if they catch wind of it.

Gemini puts their friendships above everything else, and just because they’re head-over-heels in their first relationship doesn’t mean that their contact with their best pals will fall to the wayside. Perhaps to the chagrin of their partner, Gemini isn’t willing to prioritize their S.O. over the friends who’ve always been with them. Whatever happens, they’ll always maintain some kind of balance.

Cancer has been waiting their whole life for their first relationship, and is going to treat that relationship with the care that they think it respects. They’re romantic and sentimental, growing up idolizing the perfect partnerships they’ve seen in every romance film and TV show, and they want to emulate them. They leave notes and sweet gestures for their S.O. whenever they can, whether they’re actually appreciated or not.

Leo doesn’t start their first relationship just to show off their partner—but we’re not saying that isn’t a factor. They tend to be with someone who complements them and makes their grand presence even bigger when they’re around. They see their special someone as really special, and they want everyone around them to see that quality, too. Sometimes, it might look like Leo’s S.O. is just a prop to them, but they’re so much more than that.

Meticulous Virgos desire perfection in all aspects of their life, and of course dating doesn’t escape that umbrella. While everyone wants their relationships to go well, Virgo can get hung up on the little details, obsessing over things that don’t go exactly as they’ve been envisioned, even when the outcome is fine. This can make them seem impossible to please, but in the end they’ll be okay if their S.O. is okay with things, too.

Libra is known as a sign of balance, but they can have a bit of a blind spot when it comes to themselves. In an attempt to make things fair for their partner, they’ll often overcompensate by making sure that the other person is always happy. In doing so they can wind up putting way more into the relationship than they’re getting out of it, unless their S.O. recognizes the problem and makes sure that the giving goes both ways.

Secretive Scorpio doesn’t tend to wear their heart on their sleeve, but they do not take relationships lightly, and their new partner may even see a change in them once they’re together. Scorpio only opens up to people they really trust, and a first S.O. is likely to find themselves as that person. They may hear things from Scorpio that they’ve never revealed to anyone else—and they’ll be entrusted to keep those secrets.

Optimistic Sagittarius believes that everything they touch is gold, and of course that applies to their relationships. They have a strong understanding that the universe is kind and things will just work out—which isn’t necessarily true when it comes to a first relationship. Of course, they’ll also do pretty much anything to make the relationship succeed, whatever difficulties they may encounter. They’re not happy to just sit back when things aren’t working.

Capricorn is responsible, dutiful and ready for pretty much anything, which can lead to them acting like a mom instead of a partner in a first relationship. They always want to take care of everything, both because they like to be in control and because they want everything to go according to plan. Because people don’t want to date their mom, things will work out better once the relationship starts feeling like a more equal partnership.

Aquarius isn’t ever ready to be tied down, and that’s especially true in their very first relationship. Regardless of the time they spend with their partner, they’ll also manage to remain independent and always do their own thing. They’re not totally tied to their S.O., and make sure that they know it from the get-go. A little relationship won’t stop them from fully attaining the goals they set beforehand.

Though Pisces is always thrilled by the prospect of a new relationship, they don’t want it to change their lives that much. They’re naturally quiet and introverted and don’t really like to go out. They’d much rather stay in with their S.O. and work on something creative together, or just share ideas and exchange wisdom with one another. They’re homebodies, and it’s unlikely their partner will change that. 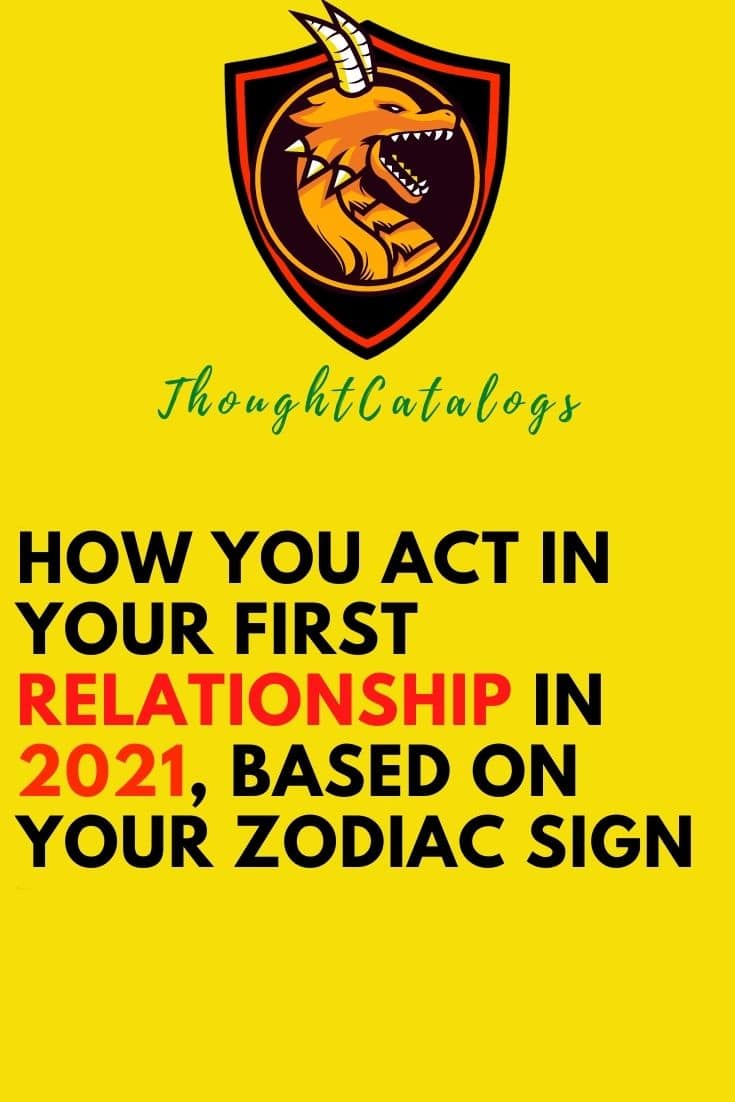 How You (and Your Crush) Act on a First Date, Based on Zodiac Sign