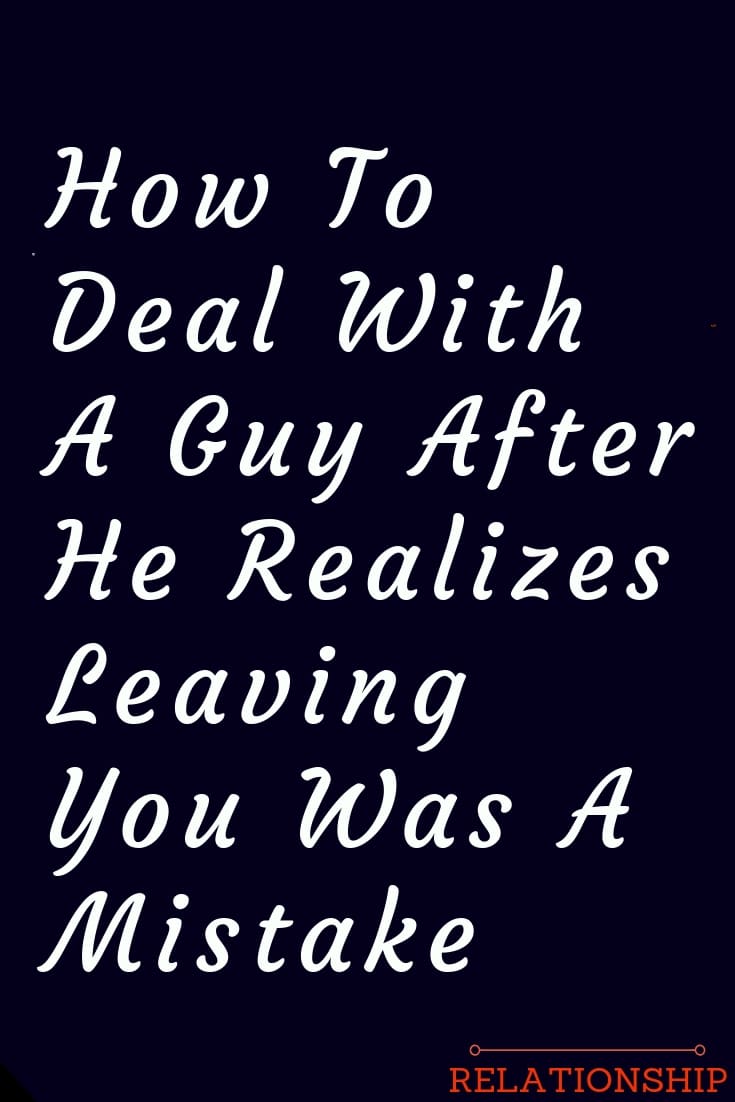 There is nothing worse than regretting your own decisions and if you’re not sure about making them, they will come back and haunt you for the rest of your life.

How to deal with someone who meant the world to you and now is just a distant memory? And how to deal with them when they realize the mistake of letting you go?

And that is when he starts panicking that he’s made the mistake of his life. The first thing that comes to his mind is to reach out to you and beg you for your forgiveness. It is hard to think rationally when it comes to this because you can never be completely sure that he has changed.

You can never accept the fact that you were a second choice to whom you once were a priority. It’s hard to understand the greediness of people to own everything and to always want more. Whatever you give them, they will not be satisfied. And that is the curse of being a human.

You make a mistake, you seek forgiveness, you make a mistake again and so on. But where are the boundaries in all of this? Should you accept his apology and give him a second chance? Or should you discard him and move on with your life? As always, the choice is yours.

Stop and think about what you really want.

Do you think that he’s changed and he is utterly sorry for his past behavior? Will you be happy with your decision? The only thing you need to pay attention to is how this decision makes you feel.

Can you imagine yourself again with him or would you be happier if you left all of your memories with him in the past? Knowing what you really want will help you bring about a wise decision that will influence your future. And you should never take your future for granted.

If you want him back, make him prove that he has changed.

If you’ve decided to give him a second chance, first make sure that he proves to you that he’s worthy of it. Make him work hard to fix what he’s done wrong in the past and tell him that this will be his last chance to reassure you of his intentions.

Make sure that he knows the weight of his wrongdoings and only then accept him back into your life. If he doesn’t realize the seriousness of his actions, you giving him a second chance will be in vain.

Make him realize what he’s lost and make him work hard to deserve it again.

Don’t ever let anyone take you for granted because you deserve much better. Make him realize that you deserve better and if he’s not willing to give it to you, you’ll find it somewhere else and he will never have another chance to prove himself.

Nothing hurts as badly as a missed chance. With all of this in his mind, he will have insight into what is going on in your head.

If you don’t want him back, show him that you’re a bigger person than he’ll ever be.

If you rather decide that you don’t want anything to do with him, tell him nicely and explain it to him in a calm manner. Don’t yell at him or show your rage because it will not make sense. Why would you be mad in the first place?

If you’re happy with your decision, you will not have the urge to be mad at him because you’ll be happy with what you’ve decided. And that is how you’ll know that you’ve made the right decision.

You’ll make him realize how it feels to be rejected when you want something with all of your heart. And you will realize that there are no mistakes.; the mistakes are only lessons to be learned.

One Day, You Will Be Loved Again And By Someone Who Knows How

When This Is All Over, Will You Come Back To Me?

What Each Zodiac Sign Should Expect On April 11Th 2021

Astrology Reveals Your Dark Side. This Is What You Don’t Want The World To See

Who Is Our Celebrity Alter-Ego According To Your Zodiac Sign

To The Guy Who Lost A Good Girl Because He Didn’t...