We have all probably had our hearts broken at least once in our lives. If you have been through this painful experience, you know that you feel totally drained and broken afterward. A broken heart is something I would never wish on anyone, even on my worst enemy. I felt it once in my own skin and I definitely don’t want to feel it again.

But have you ever asked yourself why your partner broke your heart? Does it have anything to do with astrology or the position of the stars? You bet it does. In fact, astrologists found out how a man will break your heart according to his zodiac sign. If you want to know how, read further.

This zodiac sign is very cruel when he is about to break your heart. He will do things very fast because he doesn’t want to have anything else to do with you. He is a chaser so he probably already found another victim. If you try to ask him to talk and to fix things, he will just ignore you. Once he finishes a relationship, he never comes back to the same territory again.

The most important characteristic of a man born under this sign is being self-centered. He will break your heart but not because he has found someone else or because he is bored, but because he loves himself more that he loves you. Being in a relationship with him can be very exhausting because he always takes care of his own feelings and he doesn’t give a damn about your own. So, if he leaves you, you can consider yourself happy. Even if your heart is broken now, you just saved yourself from tears and a life with a jerk.

Gemini is the total opposite of an Aries heartbreaker. He will always do it slowly, so that it hurts even more. But the truth is that he is not quite sure about the decision and he tries to get your feedback and to discuss getting back together. A Gemini will haunt you with phone calls and messages, asking you 100 times if you are sure about your decision. And even if he feels down when being with you, totally devastated because of the end of your relationship, he will never admit that in public.

This sign is the most emotional of all the zodiac signs. That’s why it is very hard for him to end a relationship. He is not good at these things and what you will be sad about the most will probably be seeing him devastated. He will be so sad that he will want you to be the shoulder he can cry on and that is very difficult since the two of you already decided to part. In case you break up with him, run as fast as you can or you will have to watch him every day crying over his bad destiny.

His love motto is: ‘Fight fire with fire!’ That means that he will jump from one relationship to another one. He likes ending relationships in front of a lot of people so you can be sure that he will do that in front of your friends. He just likes being in the spotlight and finishing a relationship in that way will mean that you did something wrong and he exploded. Don’t be deceived though, as you did nothing wrong. Your man just wanted to finish this all so that he could date that side chick who was a part of your relationship while you didn’t have a clue about her.

A man born under this zodiac sign is focused on his career to the point that he starts neglecting you. I know it is very important when guys are workaholic but there should be some time for work and some time for loved ones. So, unless you are his job, don’t expect him to pay so much attention to you. In the end, you will be the one who will leave him, because he never gave you all the love and attention that you needed.

The thing is that a Libra doesn’t actually want to break your heart but he overthinks and overanalyzes things that in the end a relationship with him ends messily. He has a roller-coaster of emotions and he doesn’t know what he wants from a relationship. If that continues for a long time, it can be very exhausting, though. But the good thing about a Libra is that he will always be someone you can count on, even if you end a relationship. In the end, some people are not meant to be partners but they are instead meant to be good friends.

When a Scorpio man breaks your heart, he will be very mean. He always hurts other people with his words, including his loved ones. So don’t be surprised if a Scorpio tells you that you are not worthy and that he can have any girl he wants. He actually thinks that it is okay for him to have side chicks but that you should be dedicated to him only. If you show attitude, he will just walk away from you but before he does, he will hurt you so badly with his words that it will break your heart to pieces.

This zodiac sign is such a sneaky bastard. You know what he does? While he is enjoying a relationship with you, he will also check out other girls so he can see who the potential girlfriend for him might be. When he breaks your heart and leaves you, you won’t see that coming. He will leave without an explanation and he never thinks that he did anything bad. So, you can expect him sleeping with you one night and then go to another girl’s bed another night. He is bad to the bone and the expression ‘bastard’ suits him very well.

The worst thing about a Capricorn man is that he probably hasn’t gotten over his ex yet. He jumped into a relationship with you just because he didn’t want to be alone. He is probably still thinking about her when he is kissing you and that is the worst way to break your heart. So, if you found out about this, don’t let him get away with it so easily. Make him pay for his sins so that you can be satisfied and ready for someone new who will treat you better than he did.

This man will break your heart in an old-fashioned way – he will cheat on you. And despite all your accusations, he will still try to convince you that he wasn’t guilty of anything. Don’t forget that he is a big-time player and that he doesn’t care about your feelings at all. He just wants to have the best time of his life and if you want to be blind to his cheating, then you can be a part of that journey. I just hope you are not that crazy to let him do that to you. In the end, he is just a man, and there are so many better opportunities than him.

A Pisces man will feel so bad if he hurts you in any way but the catch is, his emotions are way more important to him than yours. Once you say to him that there is something wrong in your relationship, he will quit you. He simply doesn’t want to waste his time fixing something that is already broken. That’s why he will just move on and try to find another girl who he can easily deceive. 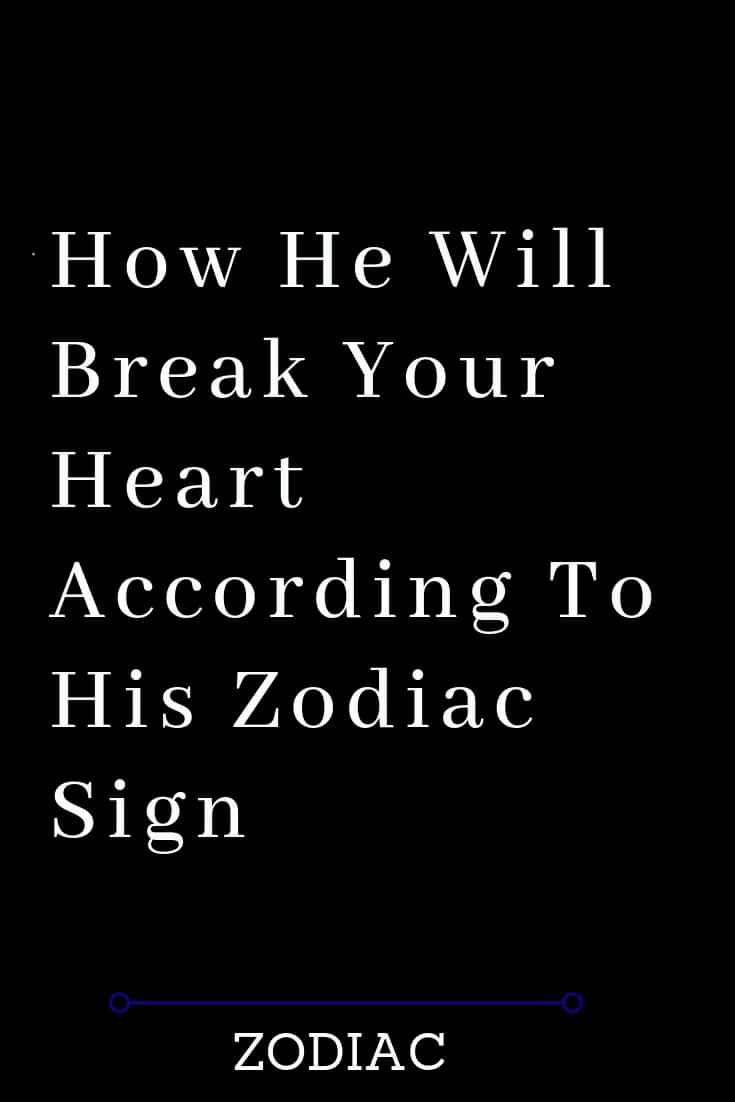 What’s Your Dark Side According To Your Zodiac Sign?