When we really like someone, we can become blind to their more negative characteristics. How could there be anything to dislike about our crush?

Depending on who you are, you may find some bad habits much easier to ignore than others. Keep scrolling to find out the negative quality you tend to overlook in your crush, based on your zodiac sign.Related: These MEAN GIRLS Quotes Make Fetch Captions

Aries is a passionate sign, and when they see their crush getting fired up over something, it only makes them swoon even harder. However, there should come a time when you stop to see if your crush really cares about something, or if they simply have a temper that can be set off by any old thing. If they’re constantly getting angry over inconsequential details, you should take another look at their behavior and see if they’re really the person you thought they were.

Taurus (April 20 – May 20): Their Unwillingness to Listen

Taurus is an earth sign who admires stability and confidence, but they can also give undeserved credit to someone who refuses to take other people’s opinions into consideration. You tend to be a little stubborn yourself, and when someone sticks to their guns in spite of lots of contrary evidence, you might see yourself in their actions. However, if the two of you ever get into a dispute and are on opposite sides of an argument, you’ll see that it’s not the most positive trait to possess.

Gemini can be impulsive, and because of their dual natures, they often rapidly move between different ideas when they get bored or restless. When your crush is impatient, you tend to see them as being just like you. They’re ready to move on when something is taking too long and are eager to jump into whatever is next. But if you see this same impatience when they’re dealing with people or important matters, you may find that this trait makes them struggle constantly. After all, patience is a virtue.

Cancer is driven by emotion, and when your feelings are hurt, you know what it’s like to pull back from the world around you and bask in negativity for a while. You might find a kindred spirit in someone who’s often expecting the worst and rarely looking on the bright side of things. However, while your mood subsides and allows you to return to being your sunny self, a pessimist will always drag you down. Be careful not soak up their bad moods, too.

Leo goes big or goes home, which is why they don’t really mind when their crushes tend to exaggerate everything. They fiddle with the details of the stories they tell to make themselves seem cooler and more important, and of course you soak up every word. They also tend to make themselves the stars of stories that they were barely involved in. You love the idea of being attached to someone so impressive, but you’re better off crushing on someone who isn’t always making things up.

Careful Virgos scrutinize every little detail of all of their projects and try to make sure what they do is always picture-perfect. While they don’t openly scrutinize the work of others, or hold it to as high of a standard, they sometimes appreciate when someone else will say the words they don’t dare to say. But while giving constructive criticism is one thing, being nitpicky and harsh is another. At first, you might like that they’re as exacting as you are, but try to see through that and recognize they’re simply judgmental and rude.

Libra is always looking out to make people happy, and in doing so they’re often forced to make compromises. You know what it’s like to weigh both sides of an argument before you make a decision, and you see indecisiveness as a normal part of life. When your crush is being inconsistent, you never hold it against them because you know what it’s like to be undecided. However, if they’re always running hot and cold—being sweet and friendly one moment and completely ignoring you the next—that’s a major red flag that there are bigger issues at play.

Scorpio isn’t all that open with their emotions, and they’re also attracted to those who remain a little mysterious, no matter how close you get to them. You understand the importance of keeping up the intrigue, but you’re also someone who knows when the time is right to let someone into your inner circle and start sharing absolutely everything with them. If your crush refuses to let you know about them, despite your closeness, it’s probably because they have something to hide. Watch out.

Sagittarius is just looking for good plain fun in a relationship, so they’re willing to overlook a lot of things about their crush. Someone can not have their act together at all, and you can fall head over heels for them just because they’re nice to you. When you’re not looking for anything serious, it’s alright to crush on someone with no direction, but if you have intentions of dating them you may find that those qualities will wear on you eventually.

Capricorn works hard and gives everything their all, so when they find someone who can work even harder, they always take notice. But while people often accuse you of being all work and no play, you do always manage to find some time for yourself to recharge your batteries. If your crush is putting in more effort than you, how will they have any free time? The answer is that they won’t, and chances are that they’ll never have time for you.

Independent, free-thinking Aquarius knows it’s important to have a mind of their own, and they’ll often find themselves crushing on people who are opinionated and unafraid to express themselves. But there’s a time and a place for argument. You might admire that someone is willing to fight for their beliefs, but when they’re constantly arguing for the sake of arguing, that passion isn’t really achieving anything.

Pisces may be super creative, but their dreamy tendencies make them prone to slacking off. When you start crushing on someone else who shares your love of coasting through life, you might think it’s a match made it heaven. That’s often not the case. You have big dreams but aren’t always motivated to go after them. You shouldn’t get stuck pining after someone who has no dreams in the first place. Their lack of ambition means your priorities are actually in two totally different places. 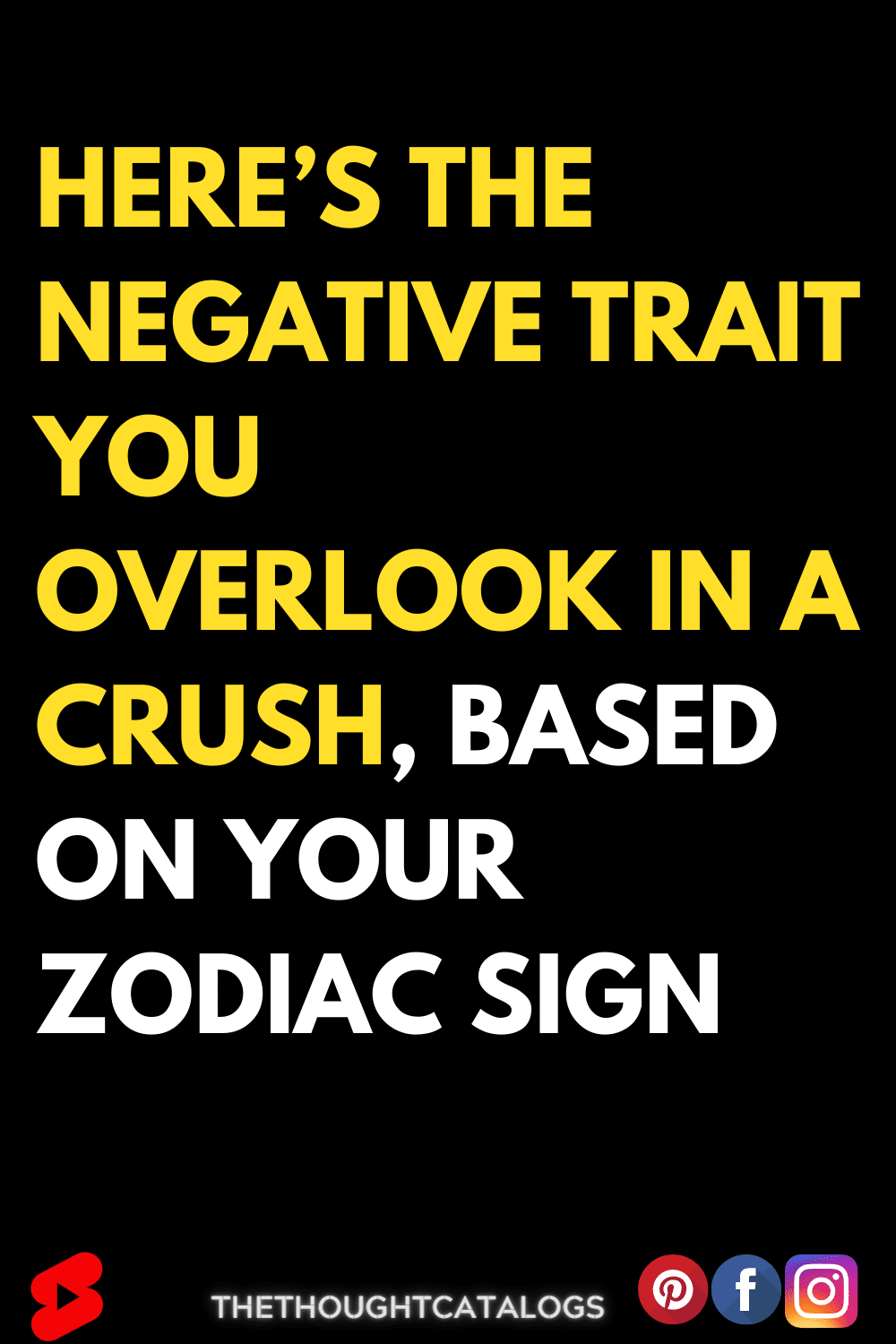 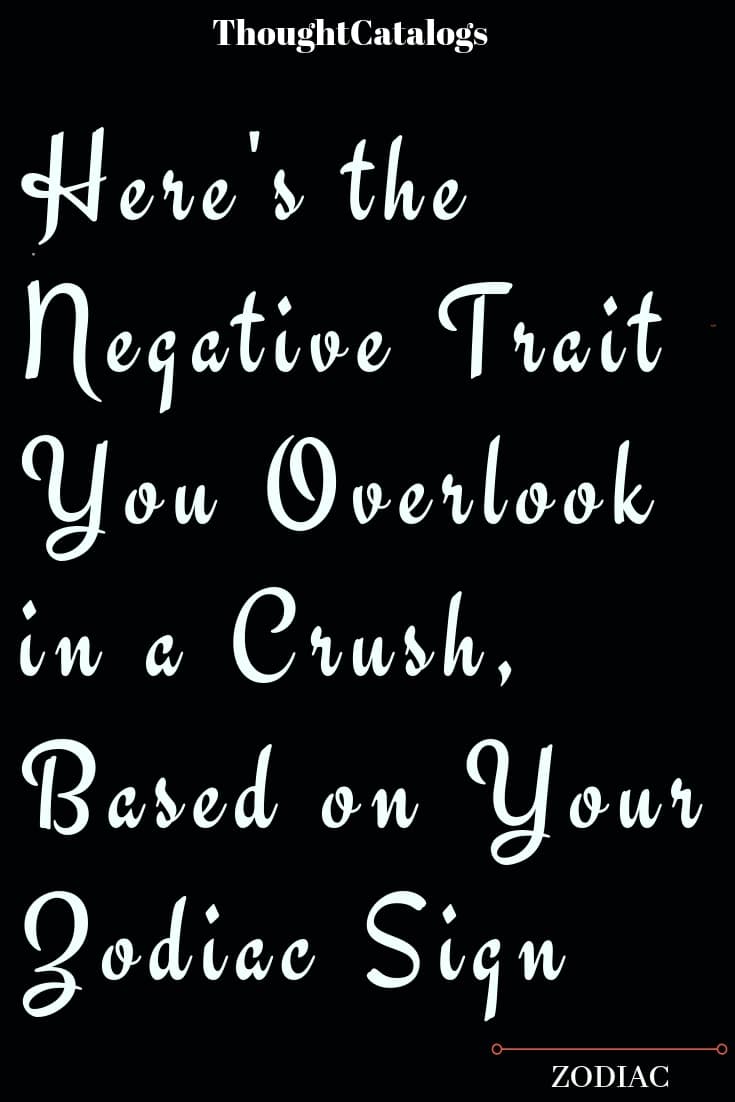 How to Instantly Have a Better Day, Based on Your Zodiac Sign