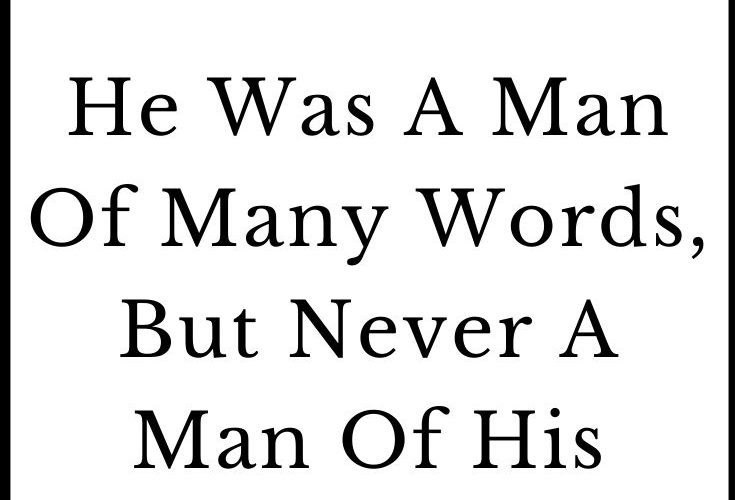 He Was A Man Of Many Words, But Never A Man Of His Word

I know that, often, we all say some things at the beginning of a relationship to make the other person fall in love with us.

We even make some promises that we don’t mean to keep. And we do it so that person will like us.

Sometimes you’re allowed to lie as long as they are white lies.

Sometimes it is impossible to keep your word, and you don’t have to.

Try to count and if the number is big, then you should try to make some changes or have a ‘serious talk’ with him.

He promised you something but failed to keep the promise so many times.

You always hoped he’d change. That he’d be more honest and try to keep his word or the promise he made.

If a man in love makes a promise, he’ll try to keep his word even if it kills him.

But he didn’t even try.

He didn’t bother because he thought that you’d be there forever to believe him and forgive him every time he broke a promise.

Now he can see that he was wrong.

He thought that they were little things and that it wasn’t a big deal if he didn’t honor them.

But that was his biggest mistake because he failed even on those little things.

The little things are what matter in life.

Everything you asked of him or made him promise was for your happiness and better life.

You were never selfish.You only wanted to make sure you were both happy.

But he didn’t care for your feelings and that’s why he didn’t want to make you happy.

He couldn’t do what you asked him to do, because to him it wasn’t important. It’s as simple as that.

Whenever you were talking about your future he would try to change the subject or to postpone the conversation for some other time, while always promising that you would talk about it.

But of course, you never did. Because you never had any future together to begin with.

Now you have started to be sick of words and promises. You want some proof that he means what he says.

You can’t stand his sugar-coated words anymore. He talks, but never does anything to prove that he means what he says.

Do you remember how many times he promised that he’d put you at the top of his priority list?

That he’d try to spend more time with you?

How many times did he promise that he’d be more romantic, more creative, more adventurous for you?

From the first day you fell in love, you had to be his priority, just like he was yours.

How long did you have to wait to become the most important person in his life?

He took that place in your life for so many years, so why did you have to wait?

He said that he loved you more than anything and that he wouldn’t allow anything bad to happen to you.

That he wouldn’t allow anyone to hurt you.

It was him and you against the world, right? But they were all just words. Meaningless words.

He lied and you have to be aware of that.

He let you down so many times. He is the reason why the spark in your relationship faded.

A man who loves you will never think about hurting you emotionally or purposely let you down.

He will go out of his way to make sure you are safe and sound in every way possible and when someone else hurts you, he will make sure they pay for it one way or another.

They know that it is easier to tell a woman what they love to hear.

To promise her something she wants without any intention of keeping that promise.

They know that a lie leads to action, and it will disappear before your reaction.

He never showed any signs of remorse? Why would he? He is not an honest and truthful man. He is not that brave.

Accepting and admitting your mistakes requires courage and integrity – both traits he didn’t have.

A man without character will never accept the blame and that they did something wrong.

He is always up for playing the blame game.

We are all humans and it is okay to make mistakes. We all make them.

But if you love someone you feel guilty every time you do something wrong and you ask for forgiveness.

You were convinced that it was your fault that he wasn’t keeping his word the way you wanted him to.

You thought the problem was inside you and that you needed to change something if you wanted him to stay.

Do you remember all those times you looked at yourself in the mirror trying to figure out why you weren’t good enough?

Do you remember how many times you cried yourself to sleep because he’d broken his promise again? And he did it countless times.

And believe me, he would have continued to do it if you hadn’t stopped him.

When you realize you can’t change him, that not even 100 ‘second chances’ or closing your eyes would make him love you and be a better man for you, that is when you’ll finally be free and start loving yourself more.

Remember how you tried to convince yourself that it would be better to be with him even if it hurt you, than to be completely without him.

Remember the day you finally decided you had to free yourself from him.

Letting him go will be the hardest thing in your life, but it will pay off.

And that’s why you should be thankful to him. He’s made you realize what you deserve.

You have become stronger because of him.

Every time he let you down, you searched for comfort in yourself, you found a strength you didn’t even know you had and started loving yourself more.

Value yourself enough to spare yourself from further pain.

You’ve already tried so hard to change him and to make him realize how miserable he is making you with all of his false promises.

You can’t do more than you have already done. You are also exhausted.

Give yourself time to heal. You’ll feel peace very soon, you’ll actually be able to hear silence in your heart.

That’ll mean that you are ready to move on.

That your heart is ready for a new storm.

Don’t be afraid of that new storm. You need the strong winds to blow away what no longer serves you.

Storms are reminders that we are still alive.

We grow through the changes.

If he can’t keep his promises, then he is a man that doesn’t believe in forever.

The word ‘forever’ clearly doesn’t exist in his vocabulary.

But you believe, you believe in forever love and shouldn’t settle for someone who doesn’t.

You deserve it, and eventually it will come to you.

Just be patient. Let go of him and forget about all of his broken promises and meaningless words.

Forget all of that so you can trust someone again.

And always remember, don’t be afraid of storms. Embrace them.

There is something beautiful in them. Allow the storms of your life to wake you up. 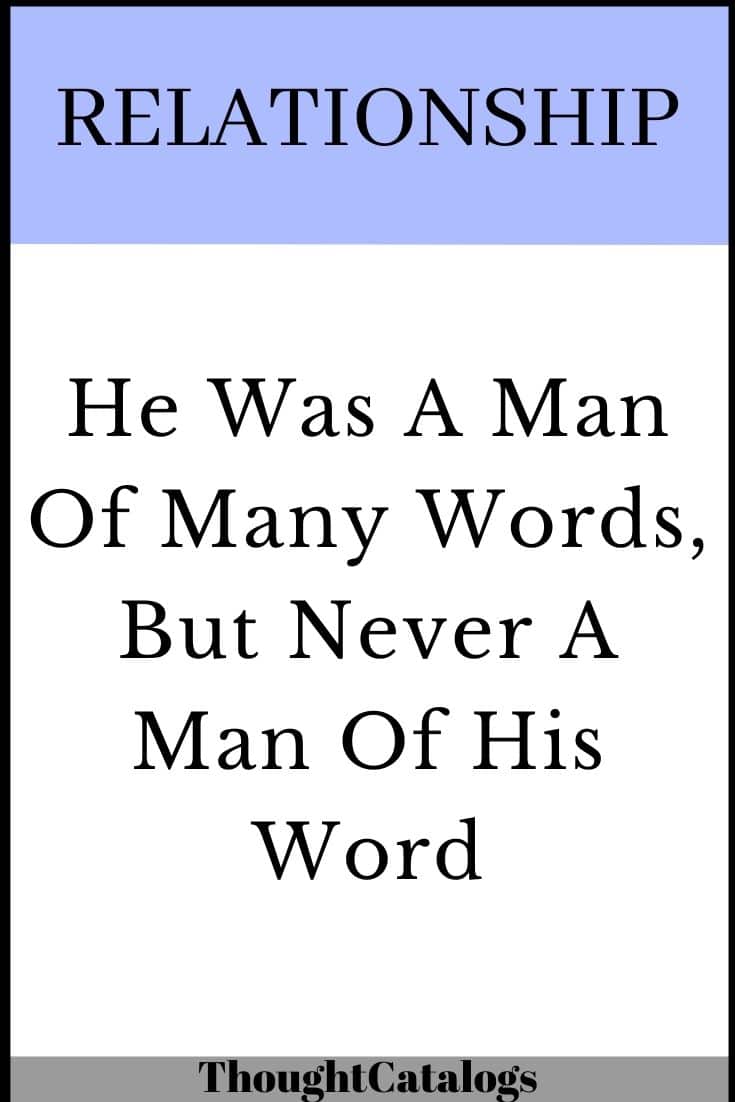