Believe Him When He Shows How Little He Cares

Most of us have had toxic relationships in our life. You know, the ones where you constantly have to wonder if he loves you and if you should forgive him this and that.

Relationships like that are more often than not doomed to fail.

The guy is treating you like crap, but you keep running back to him, hoping he will change, and the vicious circle continues without anything ever really changing.

The thing about guys like that is this: if he is showing you he doesn’t care, that’s probably because he doesn’t.

Respect yourself enough to walk away from anything that makes you question and doubt your relationship on a regular basis.

Guys like that don’t have the balls to tell you to your face that they’ve lost interest in you, so they show it in various disastrous ways, hoping you will realize it for yourself and leave on your own. In other words, make it easier on him, by ending it yourself.

Don’t delude yourself into thinking he might still care.

It sucks to hear it, but if he’s going out of his way to show you he doesn’t care – believe him! He’s an asshole for it, but it doesn’t mean you have to put up with it.

If you see him slowly slipping away, don’t try and chase him!  He’ll just disappear even faster.

Guys like that don’t have the courage to face their problems, so they just run. But don’t run after him. That’s not what he wants, and it definitely shouldn’t be what you want either! You know you deserve better.

Why would you want someone who clearly doesn’t give a crap about you and goes out of his way to show it?

Don’t give him the pleasure of keeping you wrapped around his finger. You know, only keeping you near when it suits him and disappearing whenever you need him in return.

Guess what? It’s obvious to everyone around you. Your friends probably see it, too, but they aren’t saying anything because they keep hoping you will see it for yourself

Chances are, your parents are probably aware of it also. If they’ve been around you two enough, they can see he’s making a fool out of you. They are probably hoping they don’t have to be the ones to break it to you.

You’re tired. You feel emotionally drained. You are so used to giving and giving that you have forgotten what it’s like to have the love reciprocated.

Please, don’t let your need for love overpower the shitty treatment you are receiving from him.

Remember this: the more you are willing to put up with his shit, the more he will keep giving it to you. It’s one thing to try and change his ways but it’s a whole another one to keep staying after countless ways he has shown you how little respect he has for you.

Love and relationships should be about mutual love, respect, support and being there for each other.

Have you forgotten about that? When you start making excuses for him, just think of the ways in which I’m sure you’ve been treated right and how much you are sacrificing now. Remember that you KNOW how it feels when it’s right. Now, it’s only a matter of leaving and never looking back.

Leave him before you get used to being treated like shit. Before you start thinking that this is normal behavior in a relationship and settling for it.

You know better than that. Leave, before it’s too late. Believe everything he is telling you with his shitty actions, instead of having the balls to say it to your face.

You don’t need a guy like that in your life. No one does.

So, the next time he shows you how little he cares – believe him! And run as fast as you can. 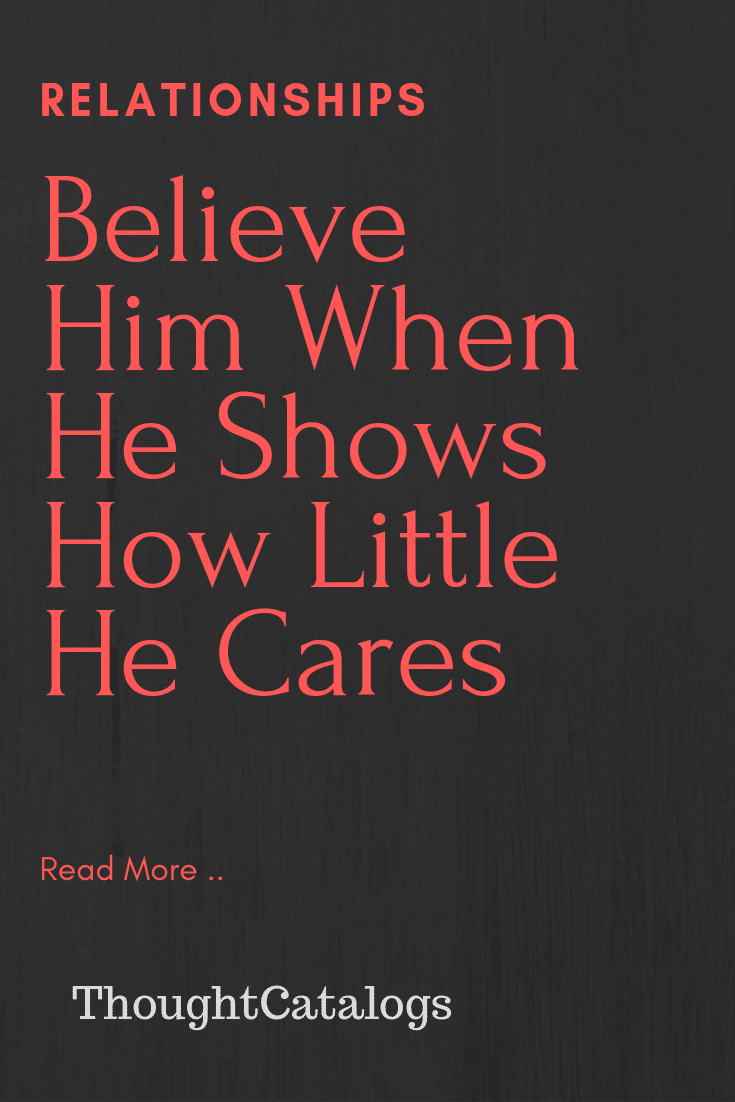 Here’s What Your Love Life Will Be Like In 2022 (In One Word), Based On Your Zodiac Sign

Being hustled in a relationship is one of the worst things that can happen to you. It is not nice to love a man and to...

2019 had been a super year for the Moon enthusiasts with 3 consecutive Super Moons! The first quarter was indeed a treat last year...

One Day, You Will Be Loved Again And By Someone Who Knows How

It might be stormy now, but you have to know that the bad patches don’t last forever. All those awful memories and the great...

It’s our normal human tendency to always look for the good and the interesting sides of our zodiac signs. Knowing the positive attributes gives us...
𝐓𝐡𝐞 𝐭𝐡𝐨𝐮𝐠𝐡𝐭 𝐜𝐚𝐭𝐚𝐥𝐨𝐠𝐬 is an Educational & Entertainment Platform theme. Our Team Publishes 100+ Content On Weekend/Monthly. We will motivate the needs of any person & make them inspire instantly You, Will, admit Once You Begin Your Journey With Us. The Thought Catalogs platform is a perfect choice.
© Copyright © 2022 - All Rights Reserved | TheThoughtCatalogs.