Remember when you were kids and boys would make complete fools out of themselves and tease girls on a daily basis?

Back then, you probably didn’t understand what the hell was going on but today you know that it was just their way of expressing their affection toward girls they liked.

Well, once these boys grow up, ‘surprisingly’ nothing really changes.

When a guy falls head over heels for a girl, they start doing really stupid things without even being aware of it (and who would blame them, right?).

They get so determined to win your attention and once they finally do, they get lost, not knowing what to really say or how to behave.

Even though their main goal is to impress you, they somehow end up looking like a complete fool in front of you.

When they like you too much, guys simply can’t help but do these 9 insanely stupid things!

1. They brag about how many women they’ve been with

And, yes, they see it as something they should be bragging about in front of a girl they like.

And you’re probably wondering why. (Well, I was dying to know the answer, too.)

The reason why they do this is because they want you to know that they are wanted and perfectly capable of winning any woman out there and you should be privileged to choose to be with them.

(I know it sounds really asshole-ish when put like this but to most of them, this is perfectly reasonable.)

2. They don’t stop talking about themselves

There isn’t a single guy who is not nervous when talking to a girl he’s crazy about.

That is the main reason why they sometimes don’t stop talking about themselves.

They are so worried about you not liking them back that they have the urge to tell you their entire autobiography, their every single childhood story and whatnot.

And what’s funniest of all is that they’re not even aware of doing so. Hilarious, right?

3. They try really hard to show off their ‘manliness’

Many guys think that the only way to win over a girl they like is by showing off how masculine they are.

That is why they try really hard to accentuate their ‘manliness’ and appear attractive, even though this actually makes them look more like a ‘macho jackass’ instead.

And then there are some guys who get crazy s+++al around a girl they like too much (mostly those guys who are only interested in jumping into your pants).

From the moment they see you, they start exhibiting those little signs of their attractiveness toward you, they start subtly touching you in random places and they can’t stop initiating s+++al intercourse (some of them go so far that they even start begging).

Talking about irrelevant and trivial things becomes their obsession and as long as their nervousness is kicking in, they simply can’t stop doing it.

When a guy falls for a girl, he thinks for days about what he’s really going to say to her and he thinks of thousands of monologues before he finally sees her.

That is the main reason why they stutter once they’re in your company.

They like you so much that they are so anxious about saying something wrong because it would be a real catastrophe for them.

They get so anxious about choosing the perfect words and keeping the conversation going so they start stuttering instead of impressing.

Some guys think that the shortcut to a woman’s heart is by impressing her by showing off their intellectual abilities. But instead, they end up looking like an ‘intellectual jackass’ and nothing more.

I mean, there’s nothing more annoying than a guy who can’t stop bragging about himself, regardless of whether it is about his ‘macho status’ or ‘intellectual obsession’.

8. They start badmouthing themselves

When a guy is crazy about a girl, it’s normal that he will feel a little bit insecure but some guys get so insecure that they start badmouthing themselves in order to appear ‘normal’ and for you to feel sorry for them.

They don’t know that by doing this, they will only appear totally unattractive.

9. They get too overwhelmed

This one is pretty rare but sometimes guys tend to get too overwhelmed when they’re not ready to date a girl they’re head over heels in love with.

They literally get sick, might even vomit and experience a few panic attacks in front of you.

They might even need a few days to come to their senses and try dating you again.

If you’ve ever been with a guy like this, then you know he’s still not ready for a relationship! 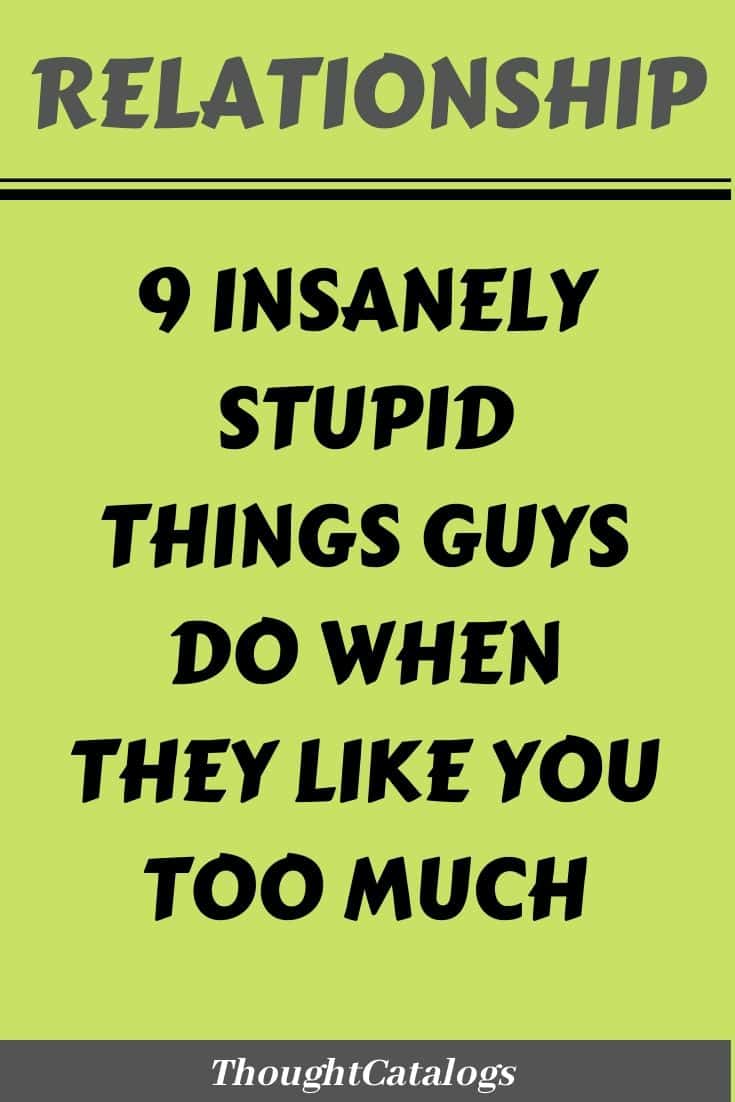 Featured Posts
This 2022 Summed Up In One Word, According To Your Zodiac Sign
41 mins ago

These Career Advice That Will Save Your Ass In 2023, According To Your Zodiac Sign
55 mins ago