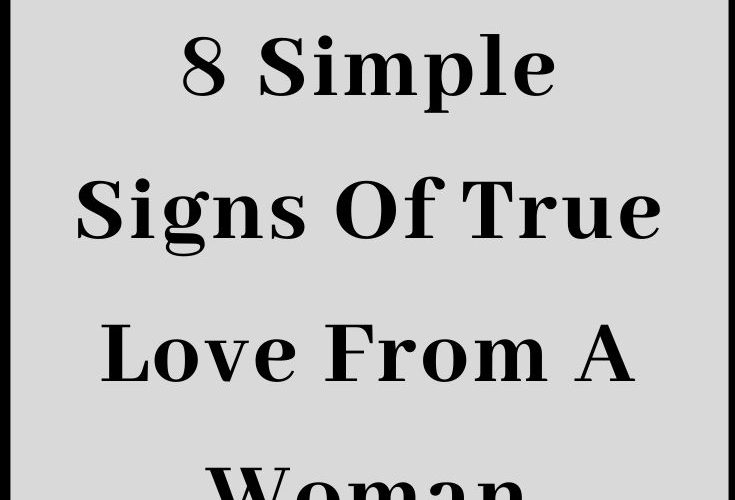 8 Simple Signs Of True Love From A Woman

The Power Of True Love

There is nothing more valuable in this world—and no one more caring and sensitive—than a woman in love.

No smile can measure to the one that a woman in love wears on her face upon meeting her soulmate.

Nothing on this earth can compare to being in a healthy relationship with the right person and sharing that mutual love on good days and bad.

It often happens that you easily notice when a woman is head over heels because her personality and behavior are strongly affected by the feeling of love. It makes her radiate in a way that nothing else really can trump.

And when that woman is shown true love from a man, she makes sure her loved one is taken care of in every way possible.

This is not mere infatuation. When she loves with everything she’s got, she shows it with her body language and puts her own needs second.

When her love life is blossoming, she goes the extra mile for her one and only.

When a woman truly loves, it’s obvious to anyone who pays attention, especially if we’re talking about the kind of love that’s reciprocal and genuine.

Both in her body and her soul, one can find true love signs, but when it comes to that all-encompassing type of love, it goes much deeper than one dares to understand. True love from a woman can’t be read with the eyes—only the heart.

It’s the little things that show it the most. A sign of true love from a woman is when she is willing to go out of her way to make sure her man is happy. When she’s prepared to forget about his little mistakes because her best friend keeps telling her ”He loves you, you know he’s worth it,” and she listens to her.

When she is shown true love from a man, she makes him a better person just by being with him. Her ability to see through his faults and disregard her past heartbreak due to her faith in love is astonishing. For her, love means being there on rainy days and sunny ones.

Her whole world changes when she is touched by true love. Her friends and family see the glow on her face and she takes better care of her well-being. A good relationship makes her thrive and being able to love one another through all of life’s ups and downs helps her navigate this journey she’s on.

If you’ve ever doubted what genuine love from a woman looks like, here you’ll find assurance. These are the most exquisite signs of true love from a woman, and one should be so lucky to experience this luxury once in a lifetime.

1. She puts her trust in the man she loves—regardless of her past teaching her otherwise

When a woman falls in love, she goes all in. Once her heart is occupied by somebody new, she gives that person the benefit of the doubt, and she decides to trust again. Even though her past broke her many times and now she knows better, she still puts all her trust in the man she truly loves.

And if that isn’t one of the greatest signs of true love, I don’t know what is.

It’s highly likely that woman who was broken—and I don’t know a single woman who has never had her heart shattered—will feel scared of the love she feels, but if we’re talking about true love, it’ll be recognized by the way she puts her trust in the man she loves.

She’s delicate yet careful, pure yet trustworthy. And she prays that it’s enough to keep the man she has such high hopes for.

Even if a woman once decided to lock her feelings away and never put them on display again, when she truly loves, she isn’t able to hide her feelings nor bottle them up if they have anything to do with the man she loves.

She feels happy, gets sad, gets mad, and experiences a variety of different emotions on the spectrum, and it all may come as a surprise because she was once cold and distant.

But when the tables turn because of her emotions, she makes you wonder what the hell happened to that girl from before.

Others were never significant enough, so she never bothered showing her emotions to them, but when it comes to the man she truly loves, she doesn’t hide how much she cares.

Women worry all the time and there’s nothing you can do about it. When a woman has feelings for a man, she gets scared something bad might happen to him. As if the devil himself came whispering all the bad things that might happen to the man she loves and that’s what makes her lose sleep on a nightly basis.

She cares about how he feels, she’s curious to know how his day went, and she wants to know if there’s something troubling him.

She always has time to listen to the man she truly loves. Nothing scares her away because she’s all in and she genuinely cares. She’s always there to listen and to help the man who restored her faith in love and showed her signs of true love after so much heartbreak.

4. She’s willing to compromise to make him happy

Even though she’s a force of nature with firmly set goals and ambitions that keep her going at all times, when she’s with the right person, she’s willing to budge and find a middle ground for the sake of her relationship.

As much as she cares about making herself happy, she’ll always make sure that her happiness doesn’t harm the man she loves. She’ll try and find a compromise for every situation that might come between their love. She wants to be a part of her man’s life, so she lets him be a part of hers as well.

She’s strong enough to know that the foundation of any good relationship lies in the ability to trust one another and help each other grow through mutual respect, love, and common ground. It’s no longer just her against the world. Now it’s him and her against whatever comes next.

5. She doesn’t hide her true self

If she feels it’s the real thing, a woman that truly loves doesn’t hesitate to show her man her true side. She walks without makeup in front of him, acts childishly, and lets out her moodiness, but most importantly, she’s confident doing these things.

Firstly, if she can’t be true with the man she loves, with whom does she get to be who she is then?

Secondly, she wants him to see her true side, so he knows what he’s getting into—she doesn’t want to deceive him. She knows that if she wants real love, there is no place for a masquerade.

And that’s why she shows her hand early on, with hopes that the love from her man will remain intact and that she’ll feel liberated for finally being able to be her true, raw self next to the man she loves.

6. When a woman truly loves, it’s clear by the way she smiles

When a woman truly loves, she won’t bother hiding it. If the love she feels is mutual and if it makes her happy, she won’t be taking off her smile. You see her grinning while doing regular things that wouldn’t normally evoke a smile.

Her mantra is ”If something can make you happy, never dare hide it!” and that’s exactly how she lives her life.

And that smile’s there to tell you that the reason behind it is none other than the man she chose to put down her walls for. She’ll constantly smile when he’s around, but even in times when he isn’t, she’ll make him very present in her mind.

And trust me, it’s going to be visible to everyone who pays attention. Her happiness is simply contagious.

7. She’s always there for the man she loves

Regardless of what her man needs, when a woman loves, she tries to be there for him. She takes his 3 am call and talks with him for hours, even though she has things to do early in the morning.

She leaves the party or club if her man isn’t feeling okay, and she always chooses her man over other people.

Because she knows what she feels is true—and if he makes her feel worthy, she pays him back double. That’s just a quality of a woman who truly loves a man—she makes him a priority when that’s the least convenient thing to do.

After all, isn’t that what real love is all about? Putting that person first and proving it with more than just words. Reciprocating what you’re getting from them and never keeping tabs. Honesty, transparency, and genuine intentions—that’s what she believes in and nobody can ever take that away from her.

8. When a woman truly loves, her eyes speak volumes

When a woman is talking to you, listen to what she says with her eyes. – Victor Hugo

Great poets and even greater writers wrote about words that can be read in women’s eyes. Not everybody can notice it, but true love from a woman can be read in her eyes when she’s looking at her man.

And even when the man she loves isn’t there, her eyes keep the same glow. That’s the incredible effect love has on a person. Once you find it, it doesn’t matter if the person is always physically there.

True love doesn’t care about distance and proximity. It’s felt in the heart and kept in one’s mind.

It changes one’s outlook on life and everything suddenly starts making sense. Your entire body yearns for their closeness, but even in their absence, the happiness is seen through the eyes. It’s miraculous what true love from the right person can do for a woman.

To all the men out there: there’s one other thing you should know.

Now, more than ever, it’s hard for women to fall in love. If you’ve found the one by being special enough to make her fall for you and she is showing you all of these signs of true love, don’t let her go.

Make her stay. Love and choose her every day more than the day before. You don’t get another chance for true love in life. Take the one you have and make it the best it could possibly be. 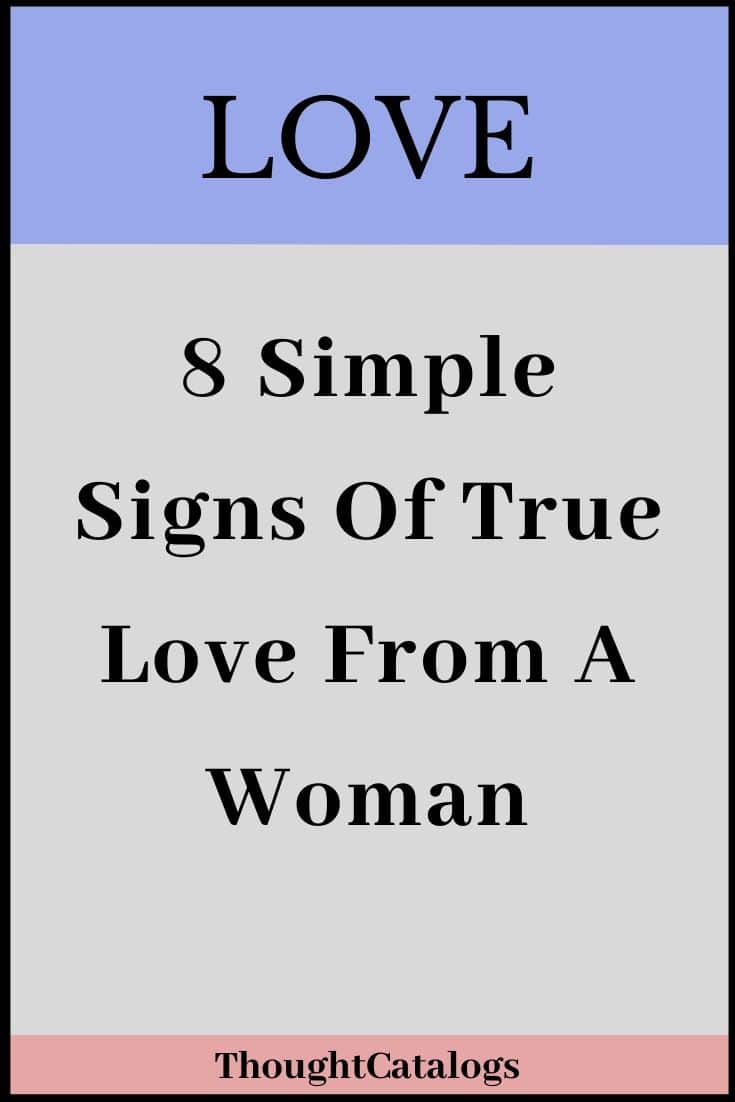