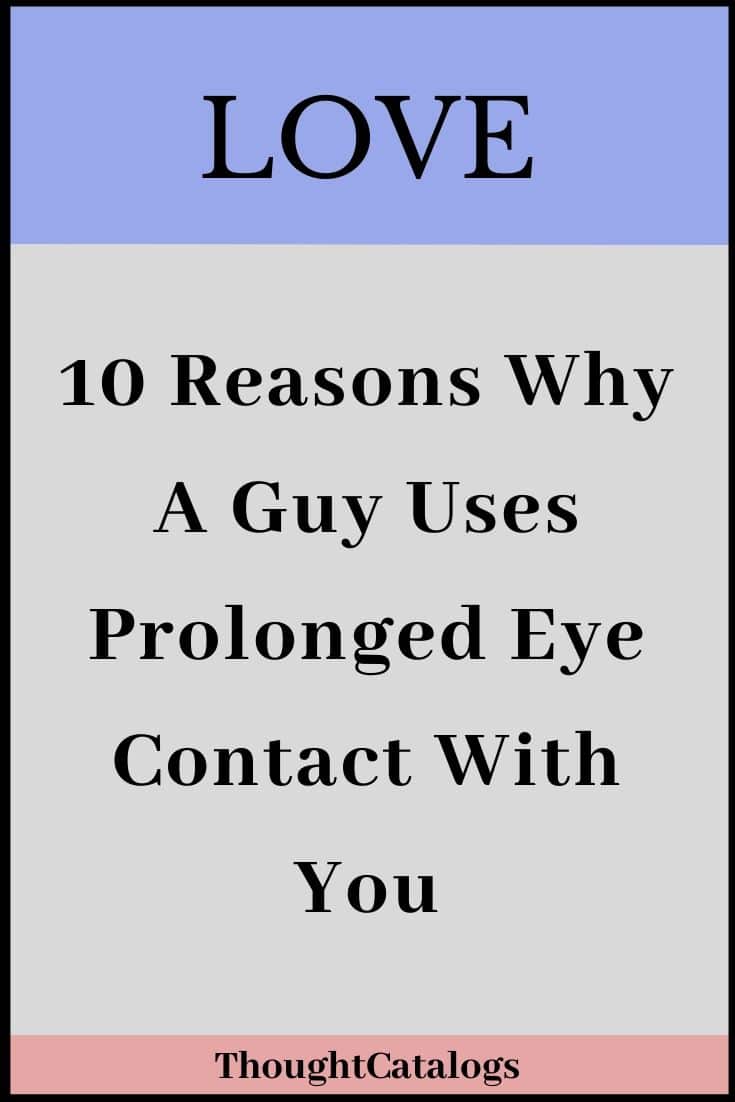 They say that the eyes are the windows to our souls, and indeed they are.

Our eyes tell a lot about our moods, hidden desires, feelings, and intentions. We express all of it by using different types of eye contact when we have a conversation with someone and lock eyes with them.

And in most cases, we’re not even aware of it. Of all of them, the most powerful one (without a doubt) is prolonged eye contact.

Prolonged eye contact is one of the most common body language gestures used in movies.

Just think of all those scenes where a couple is engaged in intense eye contact as if the rest of the world doesn’t exist. The camera is not moving, the anticipation builds, and your heart rate speeds up and pupils slowly dilate.

That is the basis for most of the romantic relationships in movies between two people of the opposite sex (and those of same gender, of course). Human beings have this beautiful way of conveying their emotions through deep levels of eye contact, which ends up manifesting itself in irresistible sexual attraction.

Yup. There are many reasons why this is one of the most powerful types of eye contact out there.

Basically, direct eye contact can be interpreted in a lot of different ways, but it always carries meaning. And when it comes to men, sometimes you have no other choice but to interpret the hidden meaning behind his direct gaze, especially early on into dating or a relationship.

Beginnings are always tricky. That’s mostly due to the gender differences between men and women. Their approach to love is very different. Their pace of progression in love moves at different rates.

So, there will be times where your guy will act confusingly, and you’ll be desperate to decipher his complex nature and wonder about the lack of eye contact in the very beginning.

Also, there will be various times where you’ll know what you feel long before he is ready to pick up on it, even to himself. And that’s where prolonged eye contact plays its most important role.

Eyes never lie, and they’re usually the first thing that reveals his true feelings. Research shows that it’s one of the first and most important signs of attraction between people.

While he might try to deceive you with his words, you can be sure that he’ll never be able to do the same with his eyes. So, it would definitely be a sin not to use this to your advantage.

If you observe his facial expressions and check his eyes, you’ll always be one step ahead of him.  You’ll always know how to recognize the kind of eye contact he’s manifesting and what it means.

So, next time you’re with your guy and you notice that he keeps so much eye contact with you but you’re not quite sure why, know that there are 10 possible reasons that will help you see the bigger picture behind his actions and your mutual gaze.

Here are 10 hidden messages behind a guy’s prolonged eye contact:

However, to sustain this long eye staring, there must be a certain vibe or chemistry between the two of you.

He can’t pull it off on his own. He’ll need some reassurance. If you’re into him too, accompanying that long stare with a light smile will be just the thing he needs from you to take the next step. When it comes to sexual attraction, there’s no faking it.

It’s either there or it isn’t. Offer him a sign of reassurance and explore the meanings behind your mutual gaze. Never break eye contact if you’re starting to genuinely get lost in his eyes. That’s a clear sign that it’s working like a charm and you should embrace it and flirt back.

2. He is falling in love

Men might have difficulty locking eyes for very long at the beginning of the romance. It’s not that they aren’t interested. It’s because the long stare is making them nervous. Locking eyes confuses them and they tend to forget everything they wanted to say.

But if he at any point feels that he is comfortable around you, he will, without even thinking about it, take a deep look into your eyes and keep intense eye contact with you.

It will be the first sign that he is falling in love with you. By using prolonged eye contact, he’s telling you that he knows where he stands with you now and he isn’t afraid.

3. His infatuation turned into love

There is a thin line between love and infatuation. That’s why a lot of times, infatuation gets mistaken for love. To say that his infatuation shifted into love is a valid claim only if you are already in a relationship.

Here prolonged eye contact is a sign of mutual trust. You no longer feel self-conscious around each other and you’re confident enough to look into each other’s eyes.

In any case, locking eyes means that you are building intimacy and deepening the feeling of closeness and connection.

Prolonged eye contact can also reveal sexual desires being exchanged between two people. It’s like saying with your eyes, “I want you and I want you now!” It’s a great foreplay tool. But it also depends on the given situation.

If prolonged eye contact is accompanied with a lot of flirting and a conversation filled with sexual connotations, there’s no doubt about the fact that he is madly attracted to you and would like nothing more than to get a better view of you without your clothes on.

So pay attention to his eyes and make sure you pick up on his subtle (or not so subtle) signs he’s trying to give out. Body language is a powerful tool for manifesting our raw desires. Keep it in tune with your emotions and don’t fight it.

5. He’s trying to get your attention

Sometimes, guys use prolonged eye contact with you only to get your attention. They do it when they are really into you because (obviously) they wouldn’t really bother doing it otherwise.

If he approaches you and you notice him muttering or changing the pitch of his voice, he’s trying to get your attention like: “Hey, I’m here, and I really like you. Please notice me!”

6. He’s engaged in the conversation

When you’re in the middle of a conversation with him –  debating about something and generally having a great time together – and he uses the power of prolonged eye contact, chances are that in this situation, he’s doing it subconsciously.

His mind is telling his body that he really enjoys your company, and he should give you a small sign of his appreciation for spending time with him.

He will stare at you deeply, so that you know that he’s there, and he’s focused on everything you have to say because he’s genuinely interested in every single detail regarding your every story.

7. He’s trying hard not to stare at your cleavage

Believe it or not, guys sometimes tend to keep eye contact with you only to distract themselves from staring at your cleavage. They do this because they are overwhelmed by what they see, but they know that it’s not polite to stare and make you feel uncomfortable.

I’m sure you can appreciate the notion behind his actions and be thankful that he’s not like just any guy who can’t keep his eyes off your rack. There’s a deeper meaning here and it might be worth exploring.

8. He’s trying to show you his dominant side

Guys are known for acting all rough and tough when they are around girls, especially the girl they like. They do this because they want to show you their dominant side – it’s simply in their nature.

They use body language to express their masculine side and attract the woman they like with muscle and looks.

So, one of the reasons for his prolonged eye contact is his determination to show you his alpha male side and win you over. Other signs are straightening his posture to look more powerful, acting all macho around you, and I’m sure you know the rest. It’s not quantum science. If you’re into it, give it a shot, and if not, at least appreciate the gesture.

This one is mostly linked with shy guys. Obviously, shy guys find it hard to approach you, and that’s why they tend to choose the prolonged eye method instead.

In doing so, they’re giving you hints that they are interested in you, but they are not sure whether you’re interested in them as well. So, they are looking for some kind of reassurance that you’re willing to talk to them or you like them too.

Sometimes guys use prolonged eye contact only because they are being polite. It’s one of his ways to show you that he respects your every word and he admires you, but there’s nothing more than that.

He’s one of those nice guys who don’t have any hidden meanings behind their admirable actions – just kind by nature.

Sadly, most of the time, we women tend to misinterpret this one because it is really hard to decipher. So, the best thing is to pay attention to his other actions and body gestures as well. Also, don’t forget to listen to your intuition because that’s your second most powerful “tool” when it comes to guys.

Blaze All Way To The Libra Back To The Cheater.

Conserve Your Efforts For A person Who’ll Value Them

Here’s Each Man’s Strength And Weakness, A/c To His Zodiac Sign

These 4 Most Lovable Zodiac Signs In 2021

What You Need To Focus On In 2021, Based On Your Zodiac Sign

You Deserve More Than Someone Who Can’t Make Up His Mind...

ThoughtCatalogs - June 4, 2019 0
I want you to know that I completely understand you when you say that you are head over heels in love with him. I get...