What you need to know about psychopathy is that it is a form of an Antisocial Personality Disorder. A psychopathic person fails to see the difference between right and wrong and completely ignores other people’s feelings. They don’t care who they have to run over just to get to their ultimate goal.

They coldly manipulate everyone around them and show total indifference toward whether they are causing someone pain or not.

As in the modern everyday world, psychopathy exists in relationships and dating as well. It is closely related to narcissism, bullying and gaslighting, which have become constantly present in modern relationships.

The problem is that the hunger for power and materialism which surrounds us has largely increased the number of psychopaths—modern day psychopaths.

Which leads us to think that the world has become merciless and empathy has become almost non-existent.

You cannot decide for sure who is psychopathic and who is not.

Modern psychopaths are not bloodthirsty killers or criminals with crazy written all over their face anymore. Quite the contrary, psychopaths have become regular people who actually become very successful and functional.

When you first meet them, there is nothing about them that warns you you’re about to let a very dangerous person into your life.

People with psychopathic traits assume the role of an almighty man who is ready to and will give you everything you want and need. They give you a false feeling of security and love. Actually, they are so perfect it’s suspicious.

They show up in your life out of nowhere and you even doubt their existence because you cannot comprehend how a man perfect like that wants to be with you.

Well, you are the type of person he exactly wants to lure into his trap. And it’s hard not to fall for their tricks because of their bulletproof charisma which masks their cruel and uncaring nature.

Psychopaths manipulate and lie to their victims without any remorse, with the goal of establishing superiority and control. They always have a goal and it’s usually closely connected to personal gain and power thirst.

A modern psychopath doesn’t have to possess every trait of the antisocial disorder to be an actual psychopath. If you’re dealing with a psychopath, you’ll have no idea what you’ve got yourself into until they show their true colors and turn off their deceiving charm and mesmerizing charisma.

But they will definitely reveal their true face when power and domination are at stake.

1. They are cold and uncaring

In the psychopathic brain, emotional connections don’t work that well. That’s why they are unable to feel empathy. Their threshold for determining what’s disgusting is pretty high. Things that other people find revolting, they don’t react to.

What other people feel doesn’t interest them at all, not only because they don’t care, but also because they are unable to detect that emotion from other human behavior or facial expressions.

2. They are manipulators and pathological liars

Evidence doesn’t serve you anything when you’re dealing with psychopaths. To gain control over you in a relationship or in any other aspect of life, they will use every trick in the book. They will lie to and manipulate you in every way possible just to become superior to you.

And the thing is, when you’ve been fed with lies constantly, after some time you forget what the truth really is. Lies become your reality and you slowly start believing them.

Psychopaths will strongly turn you against the truth because it really doesn’t suit them and they will invent their own realities and try really hard to change your mind for you to start believing their version of the truth.

You cannot trust that kind of a person. They are extremely unreliable and they will never admit they are wrong. If they screwed something up, and the chances are they did, they will play you and trick you into thinking you are to blame for everything.

Soon, you’ll be engaged in the blame game, having no idea how you even got there. You started the conversation trying to reveal the truth but somehow through his conversation tactics, you ended up being the bad guy.

4. They are immoral and they break all the rules

While psychopaths break the rules no questions asked, not giving a damn whether they’ll hurt someone or not. To them, the end goal is what counts. How to get there and under what cost? It doesn’t matter.

Psychopaths have no sense of morality and no conscience to bother them when they do someone wrong.

Psychopaths tend to be very violent because they don’t know how to suppress their aggressiveness. They lose their temper in a split second.

So, it’s not unusual for the victim to really be careful when talking to a psychopath because the slightest mistake can lead to all hell breaking loose. In other words, victims have to walk on eggshells and be extremely careful not to push the wrong button.

6. They have a superiority complex

Most psychopaths possess some narcissistic traits but not all of them are narcissists. They suffer from a false ‘God complex’, manipulativeness and carefully designed charm. Their biggest psychological problem and usually the core of their illness is the fact they consider themselves to be better than everyone else.

They actually feel entitled to being the first one with everything. They think they are so impeccable that they deserve to rule over everyone else. That’s why they make it their right to walk all over everyone who says otherwise. They are able to fool even the strongest and smartest people out there.

7. They bully and gaslight their victims

Gaslighting is a classic example of mind control. Psychopaths use gaslighting to put their victim down. Their goal is to assure their victim they are useless and stupid. They want to erase their self-esteem so they are easily controlled.

Gaslighting is a form of violence, it’s classic bullying. Hurting someone doesn’t mean you have to hit them or harm them in a physical way. Even more importantly, violence without any physical evidence is even more serious. Emotional abuse is almost impossible to prove but it has consequences which are almost the same as the consequences of physical abuse.

After all, a large amount of emotional abuse can manifest itself into real physical pain.

8. They express their psychopathic traits to targeted people

To some people, they are beautiful, interesting and funny but to others, they are a monster. The thing is, psychopaths know exactly what kind of people they are able to control. Those who don’t fit that category, they just want to impress. 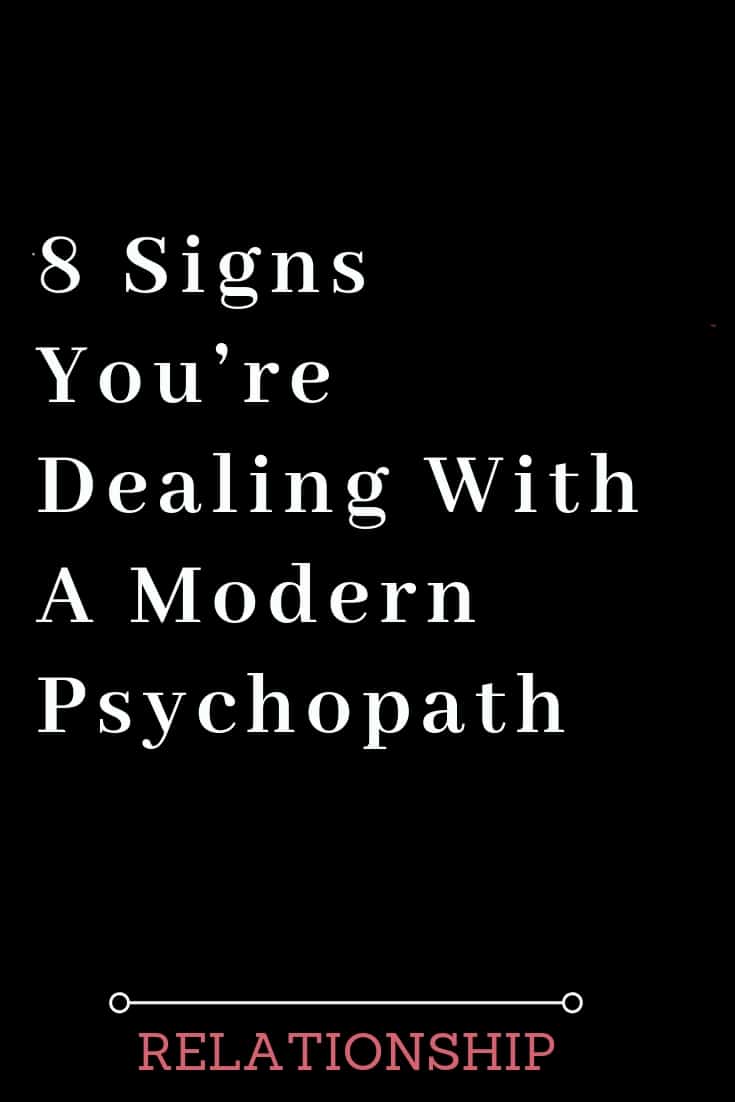 40 Effective Tinder Openers All Girls And Guys Fall For