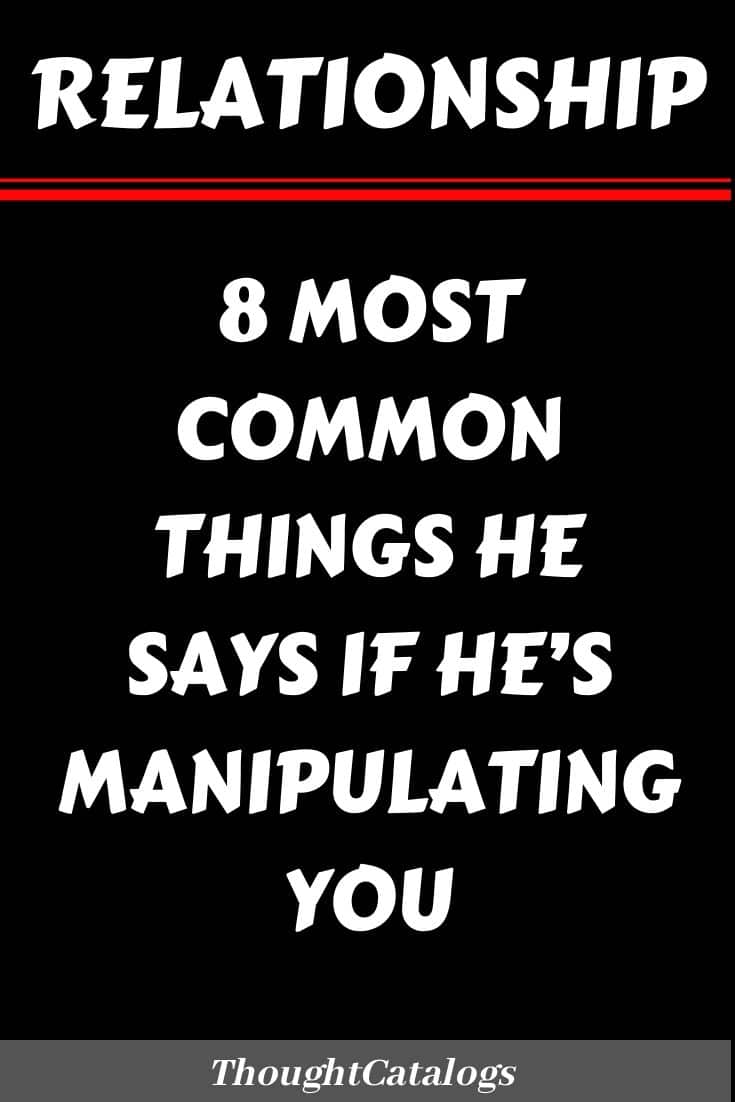 He never sees what the fuss is all about, why you are upset or how his actions hurt you. All he is interested in is relieving himself from the guilt of treating you badly.

The truth is that nobody can tell you how to feel in certain moments. If he hurt you, he ought to place himself in your shoes and think about how he would feel if things were reversed.

Your relationship should make you feel comfortable enough to express your emotions; however, he fails to realize that he made you upset or sad. He doesn’t want to see or hear you cry.

He is looking for a culprit and take pleasure in seeing your exaggerated emotions, instead of facing the fact that he is the reason to make you feel this way.

It’s easier than reassuring you that everything is OK, or – God forbid – apologize for something he has done.

He will basically make you question your sanity. He will deny his own words up to the point where you perhaps start to think “Maybe I actually heard it wrong.”

No, there’s nothing wrong with your hearing or your memory, you are simply emotionally exhausted and are letting things slide because you can’t ponder over them forever.

This is his way of maintaining control over you and twisting reality. It only gets worse with time!

If he is the sole cause and responsible for your trust issues, if he lied, cheated or betrayed you in any way, why is he so surprised that you don’t trust him?

Broken trust is not something that can be mended overnight. To be honest, it’s difficult to ever repair it.

But he is not working on gaining your trust. It’s easier to shift the focus on you and your lack of trust, instead of putting in actual effort to prove and show you that he has changed.

Playing the victim is one of the most common manipulative tactics used by toxic people. They know you are empathic and that sooner or later, you will start feeling sorry for them.

You will hear yourself apologizing, even when you know you are right, because he made you feel as though you are being unreasonable and making him feel bad.

He will make you feel like you are a bad person in such situations, while he is innocent in all of this.

When he does something he knows he never should – texting his ex, saying that he had been some place when he hadn’t or lie, he will remember that offense is the best defense.

He will play a blame game. He will recall and amplify every mistake of yours from the past.

He will equate your ex wishing you a happy birthday with him texting his ex for months, or your white lie with some of his notorious lies.

Withholding the truth, especially when it’s something important is as good as telling lies.

He will defend himself by telling you that he told you all about a particular thing, when you asked and for him, it wasn’t so important and the matter slipped from his mind and so on.

The bottom line is if he hasn’t told you something that directly affects your relationship, he is to blame. He will attempt to manipulate you into thinking he isn’t.

He has no problem falling asleep during the middle of an argument. You might be upset, crying or asking him questions – but he doesn’t care!

He knows very well that you won’t be able to fall asleep and twill probably think about all that has happened during the entire night.

You will be unable to function properly in the morning while he will be well-rested. He knows you won’t be able to spend more energy to continue an argument and that things will, in all probability, be left unresolved permanently.

The right guy would reassure you and find a solution to your problem, instead of rolling over to the other side and showing just how little he cares about you.

How Astrology Replies To Your Routine Questions Easily In 2021

The Truth Is, She’s Finally Done Missing You

This Year, I Won’t Let You Hurt Me

Staying friends with the ex ruined your relationship

ThoughtCatalogs - February 21, 2019 0
Are you staying friends with your ex, even though you are already in a new relationship? That could turn out to be a mistake. A recent...