You cannot spot an emotional abuser right away. There is nothing special distinguishing them from normal people. They hide who they really are and mask themselves to get a better chance of getting into someone’s head.

And once they get to you, it’s too late, you’ve already been manipulated into doing exactly what they want.

There is a way to deal with people like this. Firstly, it would be great if you never encountered an emotional abuser but chances are you will. At first, that person is going to look and act like any other person you meet.

That’s their way of luring their victim, by pretending their company is a safe place to be in. Once the victim feels safe and starts showing their vulnerabilities, and actually starts trusting the abuser, the emotional manipulation begins.

Psychologists have found a way to put a stop to an abuser’s tyranny. They have isolated 8 behaviors which will definitely unmask an emotional abuser.

A favorite weapon of every emotional abuser. It’s the perfect way to mess with someone’s mind. Emotional abusers are capable of making you doubt yourself and the things you’ve said. They are able to mess up your reality and make you believe in their own version of what happened.

After some time, you stop trusting your judgment and you really think that you’re emotionally unstable and you need help. At that moment, an emotional abuser presents themselves as a do-gooder and they offer you false help.

There is a cute kind of jealous and there is a dangerous kind of jealous. When your partner is teasing you because of a guy who talked to you, he is just having fun with you but maybe there is a bit of truth in what he’s saying. Maybe he is just a bit jealous but that is only because he cares.

But with this guy, you have the dangerous kind of jealous, the possessive jealous. People like that forbid their partner from seeing their friends and even their family. An emotionally abusive person is no stranger to stalking or calling all the time to check up on you. They even stay awake at night, waiting for you to come home, to grill you with questions about whom you’ve been with and where you have been.

That kind of behavior is extremely dangerous and it can serve as a warning that you’re probably dealing with an emotional abuser. Don’t discard jealousy as a sweet act because there is a line between sweet and crazy.

Partners who get nervous when you are out without them or without asking for their permission are potential emotional abusers. They will call you and text you all the time to see whom you’re with and where you’re at.

They will try to keep you under their control at all times. This kind of behavior is extremely dangerous and it usually leads to realizing that the person doing that to you is actually an emotional abuser.

An emotional abuser hides his verbal abuse in the form of a joke. They tend to verbally insult their victim in public but they do it in a way that no one suspects they meant what they said.

This is a serious form of abuse because the abusive partner clearly shows he doesn’t respect the victim he’s abusing. They think of their victim as inferior to themselves so they have the need to put them down and show them where their place is.

Even if the victim says something about it and complains because this kind of behavior hurts, they won’t stop.

Emotional abusers know how to start a fight. Winning an argument is not even important. They do it just to provoke their victim. If someone has to be careful about what they are saying and how they are acting around the ir partner so as to not start a fight, then it’s a sign they are an emotional abuser.

When having discussions which always lead to fighting, emotional abusers usually manipulate their victim into thinking they are the one who is guilty of the fight in the first place. An emotional abuser pretends to be a victim and the real victim ends up apologizing for something they didn’t do.

One moment they love you, the next you are to blame for everything bad that has happened to them. When an emotional abuser does his thing and insults you in all kinds of ways, they come back to you apologizing.

They see things that are not happening. For example, if someone is praising their partner to someone else for the things they’ve done, an emotional abuser will take this act as an act of hate. On the other hand, if the partner’s responses to this stay neutral, they will see it as hostile as well.

If you are not with them, if you don’t agree with them, they think you’re against them. This can get really intense for the person living with an emotional abuser because it starts getting confusing.

Emotional manipulators use affection as their weapon. If their victim is not behaving the way they want them to, they will withhold affection as a tool of blackmail to get their partner to do what they want.

This is dangerous because by manipulating their partner, an abuser makes their partner dependent on their love and affection. So when they need something, they manipulate them with love to get it.

Because of these behaviors, you will be more aware of how emotional abusers act. It will be so much easier to leave after you realize they are emotionally abusing you. And the sooner you leave, the sooner you’ll start healing. Only then can you get your life back. 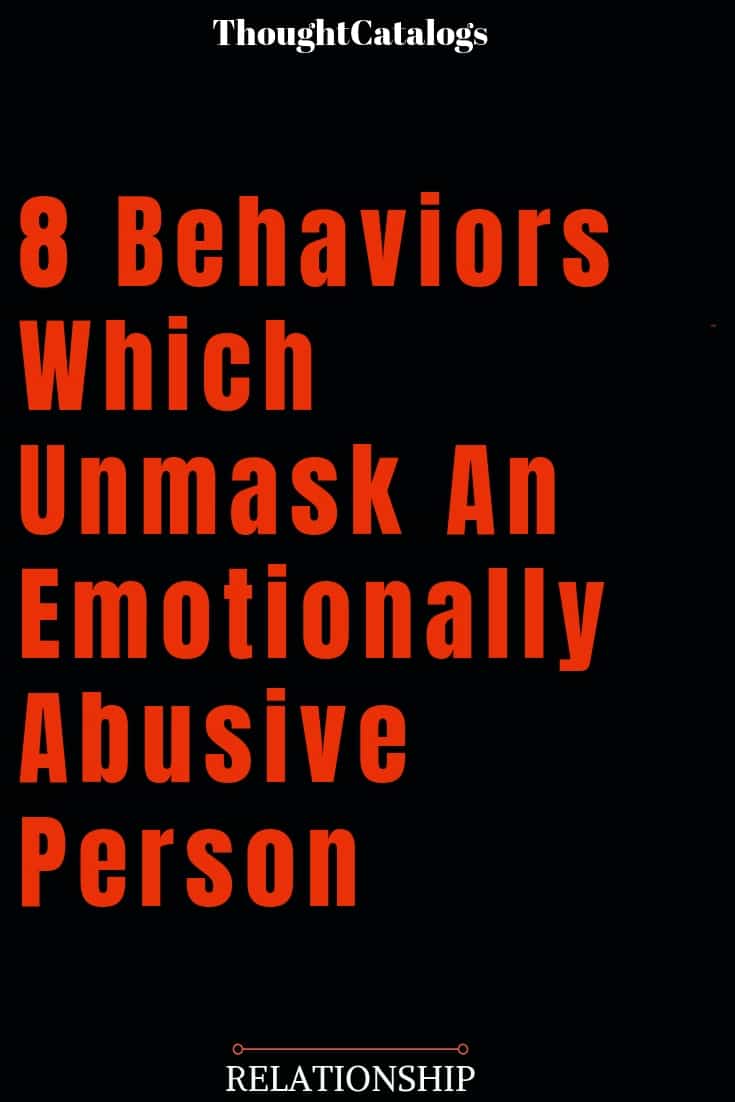 10 Warning Signs Your Partner Is Ruining Your Mental Health