I know that accepting what happened is real torture, but you need to do it to actually start healing.

Just do it fast, like when ripping off a band-aid. It’ll hurt less, but it won’t make you feel better.

I won’t lie to you and tell you that things will magically work out well for you. No.

You’ll have to be a mess for some time to actually accept that you’ve been cheated on. You’ll have to go through all stages of grief and only then will you be ready to move on.

But, the most important thing is that you take one step at a time. It will pass, but it’ll take some time for that.

Once you get over it, though, you’ll see that what doesn’t kill you indeed makes you stronger.

2. Let the anger out

Cry, scream, smash things. Do all that you need to let the anger out. Don’t keep it inside because you’ll explode one day.

Just let it all out. Once you do it, you’ll see that you feel better. You’ll feel calmer and know how to move on.

You’ll be able to think with a cool head and know that it doesn’t make any sense to take revenge. By spitting on the one who cheated on you, you’d give him too much attention.

And that’s not what you want, right? That’s why you should hold your head high and move on. Let karma do the dirty job for you.

Trust me, cheaters always end up with someone who’ll end up hurting them.

That’s why you shouldn’t waste your time and energy on him but on yourself.

The worst thing you can do after being cheated on is to give a cheater a second chance.

Just think what kind of message you’re sending him. You’re telling him that he can do it again and if he tells you how really, really sorry he is, you’ll forgive him.

Trust me, this is no way of getting your happiness back. He won’t cheat on you only if he respects you, and if you treat him like this, he’ll do it again.

That’s why you should be strong and stay away from him. If he tries to come close, just ignore him.

Show him what kind of mistake he made. Let him think about you a little bit.

Give him time to feel sorry for everything he did to you. Let him get a taste of his own medicine. That’s the only way he’ll learn to treat a woman right.

4. Don’t go through it alone

Once you’ve been cheated on, don’t let yourself go through it on your own. Reach out to your friends and be in their company.

You’ll feel heaps better when they remind you of how amazing you are.

Best friends know how to boost your self-esteem and that’s why you have them in your life.

Everything is much easier when you share it with someone. Don’t think that you’ll be a burden to your friends or that they’ll think you’re boring.

They’ll be happy about being there for you even in a situation like this.

True friends will give you good advice and comfort you, and your load will immediately feel lighter. At least you’ll know that you’re not alone and you’ll always have good people to stand by you.

5. Remember that it wasn’t your fault

People who’ve been cheated on think that it was their fault. They believe they did something wrong and that their partner simply cooled down.

But that’s not the truth. If you think it was you who destroyed your relationship, just remind yourself of all the sacrifices you made for it.

And now see what you got in return. Guys cheat for sex while women cheat because they’re not happy in a relationship.

They do it because they’ve been neglected by the one they love most. So, if a guy cheated on you, just know that it was merely a moment of pleasure.

He won’t marry that woman. He probably won’t even see her again.

She’s been used for only one time and that’s it. But in doing so, he lost the woman to love. Trust me, that’ll be his biggest punishment.

6. Give yourself time to heal

The worst thing you can do is find another man when being hurt like this.

That’s why you should stay alone with your thoughts and feelings and project them onto something helpful.

Give yourself as much time as you need. Work on yourself. Do things that make you happy. Feel that you’re free from one toxic man and you’ll never let any man treat you like that.

This was just a lesson that hurts for now, but it’ll be something that’ll help you become stronger in the future.

You know that saying: “You’ll be happy, but first, I’ll make you strong?” The same goes for you.

Moving on won’t happen so fast but when it does, do it without any regrets. Once you go through all the stages of healing after being cheated on, you’ll be ready to finally move on and start a new chapter of your life.

You’ll realize that it wasn’t your fault and that you were too good for him. When the right time comes, you’ll find that you deserve so much better. You’ll never cross a line and do things that you don’t feel comfortable with.

You’ll never put a man first unless he proves he’s worth it. When you learn to cherish and respect yourself, others will do it too.

That’s the time when you’ll finally be ready to move on. 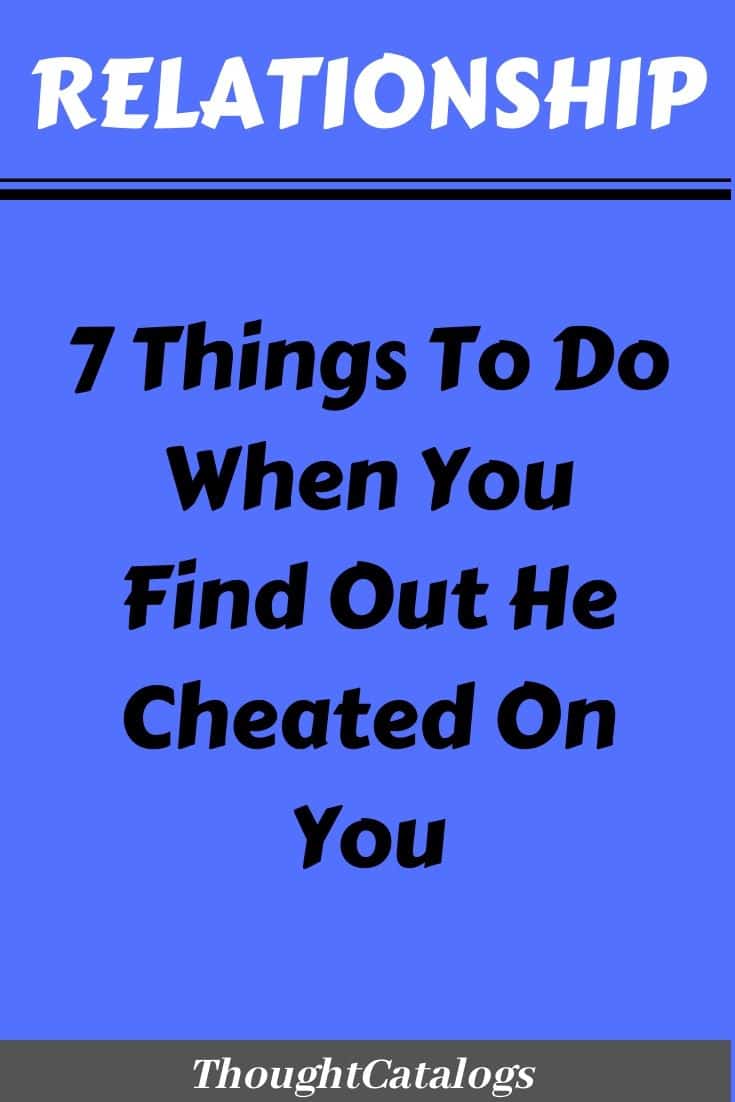