We all know the drill. You meet this wonderful guy with whom you’ve been on several dates, and he starts calling you ‘baby’ but you’re not sure why he’s doing it in the first place. You start asking yourself whether he is trying to tell you that he sees himself in a relationship with you or he’s just saying it for no apparent reason.

Or you text with a guy and he immediately starts addressing you with ‘baby’, and you start wondering whether he’s head over heels for you or he just sees you as his sister. To be honest, it’s really hard to decipher this one because you can’t see his face while he’s saying it. It can also be that you’ve never seen the guy before and he starts showering you with different compliments among which is, of course, – baby.

The biggest question of all is: why do guys do it?

Are they doing it because they like you, and they want to flatter you or they are doing it in order to sexualize you? What is their intention? How do they want you to feel when they say it to you?

Some women like it, others are appalled by it, but one thing is for sure – many of them still don’t know the true meaning behind it. Many women are still unable to answer these questions and that is why they sometimes misinterpret his intentions and then blame themselves for not thinking twice before coming to a conclusion. Here is the list of possible reasons that may help you in future to understand why someone is calling you ‘baby’.

This is what it means when he calls you baby:

1. He thinks you are adorable

Just think of a situation when you’ve met an adorable, cute baby. You instantly desired to hug her and protect her from any harm. That’s exactly what some guys are thinking when they are calling you ‘baby’.

He sees you as a cute baby who needs love and protection, and he wants you to know that. I know it would be easier if they just said it, but that is how they’re wired. Especially, if you’re in a relationship, you will be his baby because he feels like he’s the one who needs to be in charge of you.

If anything bad happens to you, he will be the one who will save you and help you to overcome any issue you might have at the moment. He wants you to know that he will always be by your side no matter what happens.

2. He’s playing mind games with you

Yup. This one is mostly related to the guys with whom you’ve just started dating. If he’s putting enormous efforts to amaze you and make you feel truly appreciated and then another day you barely recognize him, this could be a sign that he’s a player trying to play you.

If he’s constantly changing personalities and the further you go, the less you seem to recognize him, he’s playing mind games with you. He will call you ‘baby’ while doing all of this only to hide his true intentions.

When he sees that he’s losing you, he will call you ‘baby’ to get your attention because it’s his way to lure you into his toxic world. He knows that by calling you ‘baby’, he can more easily hide his manipulative side.

3. It’s his nickname for you

If you’re in a relationship and your guy is constantly calling you ‘baby’, this might just be his nickname for you. Perhaps he is not that creative with words and that is why he keeps calling you ‘baby’ until he thinks of something else more appropriate.

But, you can’t blame him either. He thinks if he is calling you ‘baby’, you will understand how much he loves you. That is why most of the time he refuses to call you by your name because he thinks if he calls you ‘baby’, it will be stronger.

If your friend is calling you ‘baby’, it might also be a nickname. Friends tend to do that because baby is more like a universal word for showing affection and appreciation to the people who are close to you.

Sometimes the guy you’ve just met is only interested in getting you into bed, and he’ll do anything to succeed. He will even call you his baby only to reassure you that he’s serious about you and that you should give him a chance.

That is why he’ll keep excessively complimenting you until say ‘yes’ to him. The same goes with strangers. When you’re walking down the street and some guys are calling you ‘baby’ or whispering, they are doing it because they see you as a target.

They want you to know that they like what they see, and they would gladly take you to bed—of course, if you agree to that. Also, if you meet someone in a bar and he looks really drunk and keeps calling you ‘baby’ (and he doesn’t even know you), it’s probably the alcohol speaking in his name.

5. He’s head over heels for you

Yeap. If you’re in a relationship or about to enter a relationship and he seems like a really nice guy and never misses a chance to call you ‘baby’, the chances are he’s head over heels with you. Congratulations, he’s totally fallen for you’ and he can’t help himself than to call you his baby.

Another indicator is if he’s calling you ‘baby’ in front of his friends or family. If he does, it means he’s proud of you and wants everyone to show what a wonderful girlfriend he has.
Guys are really weird when it comes to this.

When they’re in love, they express themselves in the funniest ways possible. E.g. He calls you his chicken or pig and the first thing that comes to your mind is: Does he think that I’m fat? Of course, not! It’s just their silly way to show you affection’ and we shouldn’t blame them for that, I guess.

6. He wants to bring your relationship to another level

If the two of you just started dating and he’s been acting weirdly lately, it may mean that he wants to bring your relationship to another level. You will know it if he starts inventing some new ways to show you that he cares about you.

If he didn’t call you ‘baby’ so far and now he starts doing it, it’s an ultimate sign that he wants you and only you. He wants to make sure that you’ll be his and that it will stay that way.

Also, if your guy has always had problems expressing himself and now you can’t shut him down with all of these compliments, he wants to let you know that he’s changed. And he’ll keep calling you ‘baby’ until you notice it. Cute, I know.

7. He doesn’t know your real name or he simply keeps forgetting it

You will also meet polite and nice strangers that will call you ‘baby’ because they are either too ashamed to ask for your real name or they are just passing by and don’t have time to ask you. As I said, calling someone ‘baby’ may be universal and personal at the same time.

Sometimes people simply keep forgetting your name (especially the elder ones), and if you think that is the case, you can make fun of it and say that this is not your real name. Again, if this doesn’t bother you, there’s no need to worry about it.

It’s up to you to differentiate the persons and situations, and I hope this list will help you find the real reason why is he calling you ‘baby’. 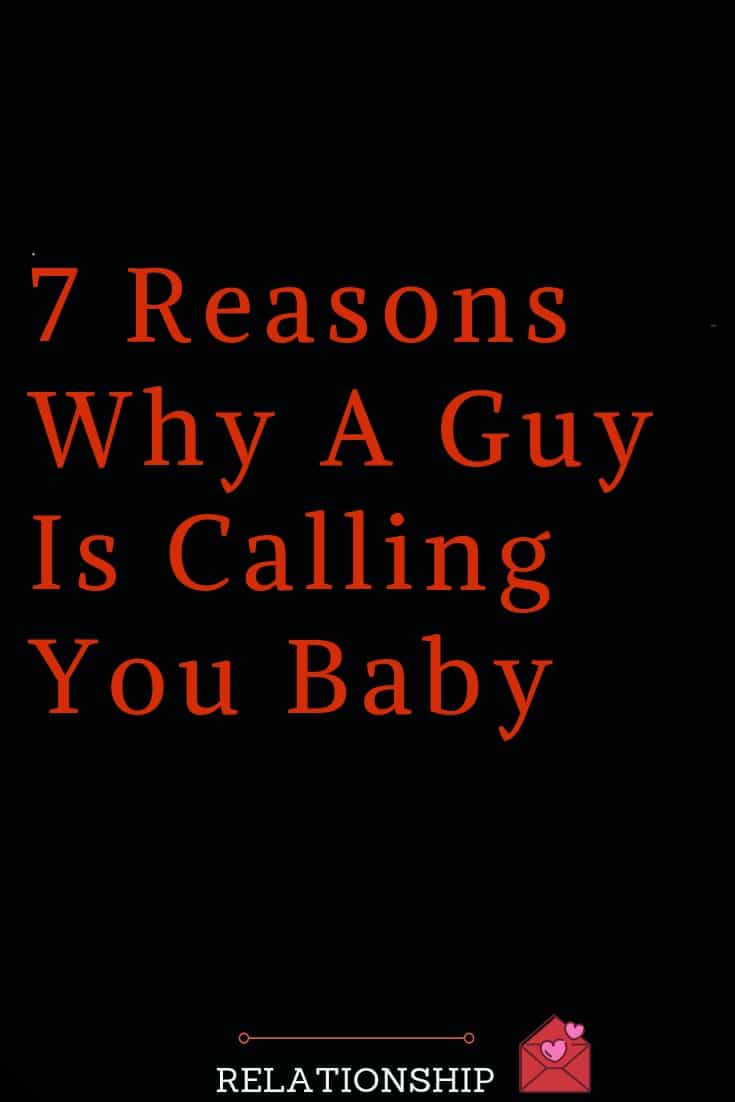 What Each Zodiac Has Been Doing Wrong In Relationships