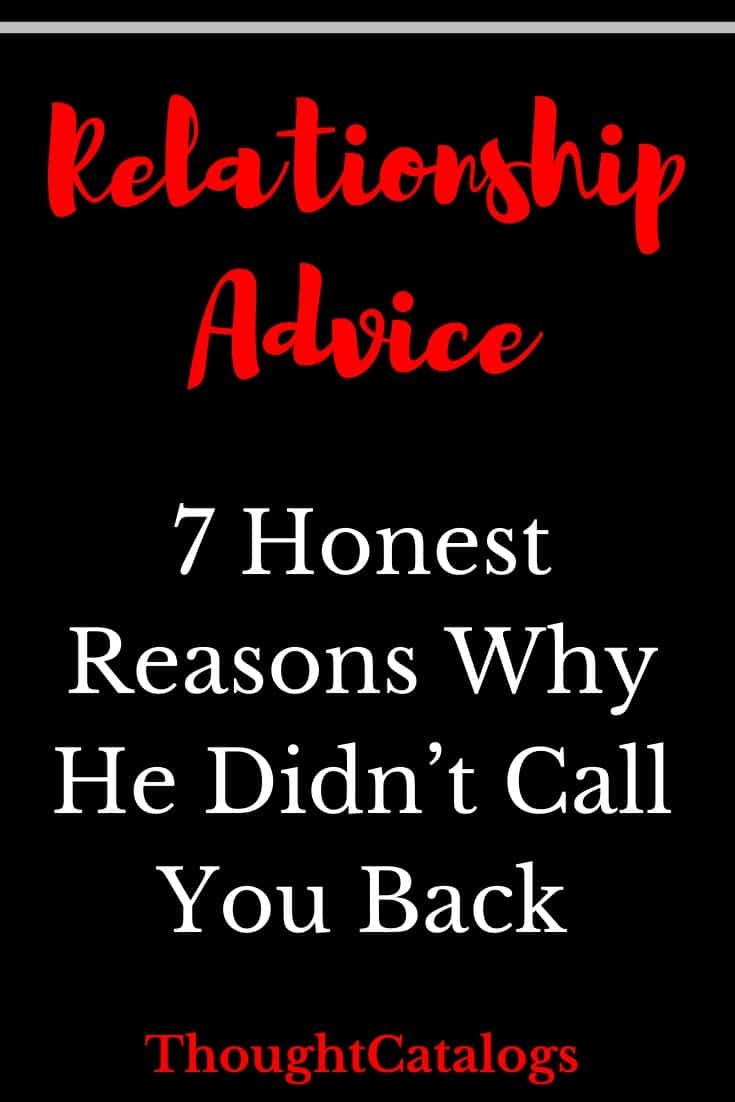 You went on a first date and you had a blast. It lasted for two hours, and both of you laughed and told all kinds of stories. It seemed like you really hit it off. At the end of the night, he walked you home, and he even asked if you wanted to go on a second date.

Now, you’re obsessing with millions of questions. Did I do something wrong? Did I embarrass him in any way? Did I make a wrong move? Did I have something stuck between my teeth?

There is nothing worse than getting rejected, especially in that cold and harsh manner without any explanation. Maybe it had nothing to do with you, but you can’t stop blaming yourself because you have no idea what went wrong.

You get sick in your stomach, and you’re afraid to call him back because you finally thought you’d met a nice guy, but it turned out that you were the only one thinking that.

Why he didn’t call you back?

1. He thinks he is not good enough for you

You know how sometimes you are insecure and you doubt yourself? You sometimes surely think that you are not good enough for something. You lack confidence.

Well, guys do that, too. Don’t think that they don’t. They can get as insecure as we do. The fact they are men doesn’t mean anything.

If you are strong and independent and you’re not scared of anything, it can intimidate them because they are not used to dating girls like that, not these kinds of men.

That can be the reason he doesn’t call you back. He’s just not ready yet. He’s scared to make that move.

So, either he’ll grow a pair and act like a real man or he will pass. But in that case, it’s better that he passed because you don’t need a man like that by your side.

Even if you went on a few dates with him, you wouldn’t have noticed that he is emotionally unavailable. People who have problems with trust and intimacy issues hide it.

From the outside, they look perfectly fine, until it’s time to dig in a bit deeper. You can’t possibly know what kind of shit he is dealing with and what kind of problems he has.

Maybe he is still heartbroken and is simply not ready to jump into a new relationship. Maybe he gave it a shot with you, but he realized that he still isn’t ready. If that’s the case, then believe me, you’re better off.

It’s way better to be single than to get stuck with an emotionally unavailable man.

3. He is still not over his ex

Not all of us handle breakups the same. Not all of us can just move on with our lives. Some people just don’t know how to deal with a broken heart. Maybe he is still in love with the girl that broke his heart.

Maybe he went out with you because his friends told him to move on with his life, but in reality, all he wants to do is get back with her.

That can very likely be the reason why he didn’t call. And I must admit, it’s a bit selfish. If he knew he won’t date you, why would he take you on a date in the first place?

This way, after not calling you, he is only making you feel like crap because you think it’s something you did when it’s not.

4. He doesn’t want anything serious

If he’s only looking for someone to have a good time with, someone to loosen up with a bit, then he definitely won’t call you back. He is not looking for anything serious. All he wants is just a fling.

He doesn’t want to settle down, and it’s not your fault for that. Does that justify the way he acted? No, but does that mean you have to sob for him? Of course not, you have a life to live.

How will you know for sure that you are just a one-time thing?

If he has time to post on social media and to snapchat and doesn’t have the time to text or call you, then you can definitely be sure that he sees you only as a casual, one-time thing.

5. He’s scared of getting rejected

Let’s face it, rejection is everyone’s biggest fear. When you go out on a date with a man, you definitely ask yourself before and after, “What if he doesn’t like me?”.

You’re scared of rejection and that is definitely a usual and normal thing. That’s why, sometimes when a man doesn’t call you, he is just scared that you’re going to turn him down.

Maybe on your first date you unknowingly left an impression that you are uninterested. Maybe you were totally oblivious of the vibe you were sending and that’s why he is not sure of what to do next.

Challenges come from mystery. When you lay all of your cards on the table at once, you don’t leave any mystery around you, and that is just not that interesting.

Men want to be challenged by discovering who you are and what you hide beneath your exterior.

If you told him everything about yourself right away and if you let him in on some secrets in your life, you’re given him too much information, and he has no reason to dig in deeper because you’ve already revealed everything he needs to know.

Usually things go in a way that a man chases a woman and a woman waits to be chased. But, sometimes, men don’t want to chase. They want to be chased.

He doesn’t want to leave an impression of being too interested because he wants you to work hard to get him.

But honestly, if a man seeks so much effort and attention from the beginning, you should think twice about dating him.

Also, this ‘playing hard to get’ technique doesn’t always work out. So, it has probably happened to you that instead of thinking he wants you to chase him, you end up thinking that he is just not that into you.

This Is Why You’re An Alpha Female, Based On Your Zodiac Sign

Here The End Results Of Relationship Will Be, A/c Your Zodiac Dates

I DON’T NEED PERFECTION, JUST A GROWN-ASS MAN WITH HIS SHIT TOGETHER

The Bullshit You Should Stop Letting Him Get Away With, Based On Your Zodiac Sign

August 2020 Is Jam-Packed With Cosmic Events; Here’s What You Should Expect

The Boy Who Became A  Nightmare

ThoughtCatalogs - May 23, 2020 0
There’s a reason I can’t sleep through the night anymore—without your hands here to hold me, I’m afraid of everything. Without you next to me,...