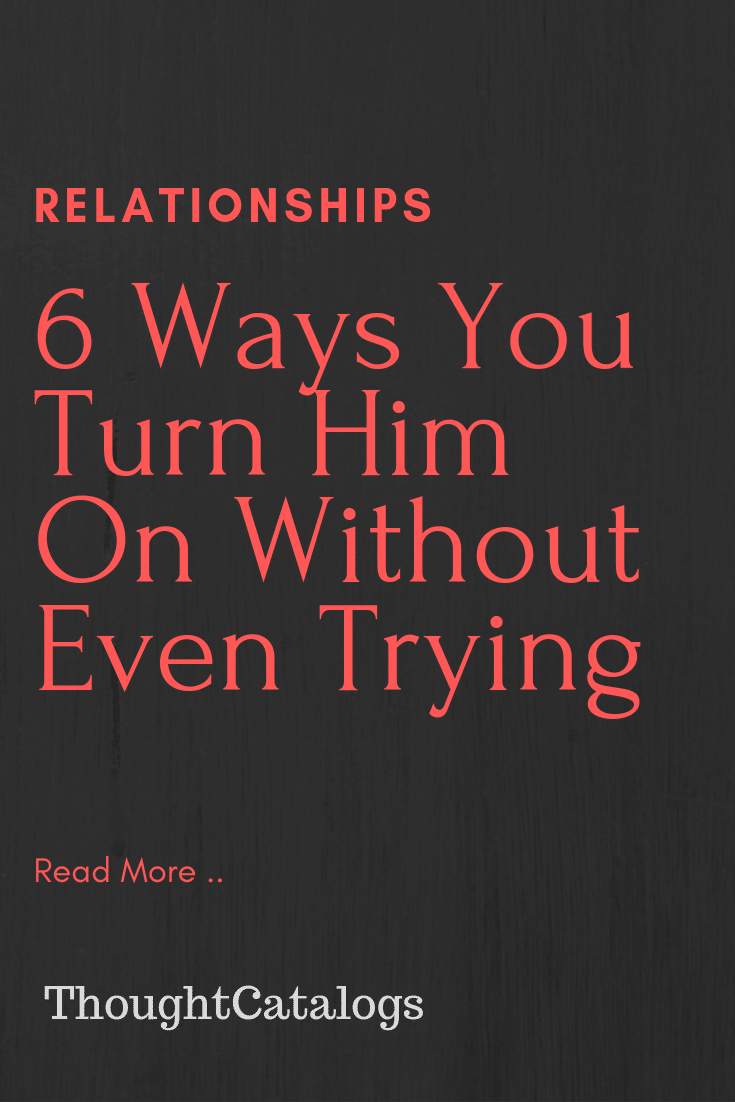 Knowing the biggest turn-on for your man is the ultimate wish for every girl out there. Being able to make him go from unfazed to fully attentive is the dream, and one you seek to achieve at all costs.

The thing is, the biggest turn-on is not always wearing those s++y fishnet stockings or lace underwear that he absolutely loves. Sometimes it’s other things that mean just as much – if not more.

Don’t get me wrong, there’s nothing s++ier than a confident woman in a pair of s++y as hell underwear making a move on her man, making him want her more and more with each passing second.

I love power females – those who know how to assert themselves and rightfully get theirs. There is a certain strength in that, and kudos to all women out there who know just how to use what God gave them to their advantage.

But alongside that s++ appeal and the s++y bedroom antics, there are ways you make him hot for you unknowingly, without even trying.

When you’ve been with your man for a while, other things take precedent over those more on the “superficial” side.

And in these times, your man seeks something deeper and more profound than just your hot bod and a seductive smile.

But don’t worry, you most certainly provide him with all of that without even knowing it has that huge of an impact on him! Here’s all the ways you turn him on, without trying!

1. Resting your head on his chest

As hot as s++ and under-the-sheet action is, there is nothing quite like that soothing, comfortable feeling of having your head rest on your beloved partner’s chest after a long, hard day, knowing there’s no place either of you would rather be.

Lying on the couch, talking, cuddling, and feeling safe and protected is all the intimacy one needs at times. He loves it more than you know because he loves being your safe harbor.

He loves being the one you can silently rest with, not expecting anything other than a cuddle and a forehead kiss. You are safe with him, and that is all the intimacy he really needs.

2. Randomly texting him that you love him

Imagine this. You’re at work, busy as hell. Everyone around you is in a fuss, running around, asking things of you, and you don’t know what to do first.

And then you look down as your phone screen lights up, and it’s your love reminding you of how much he loves you and that he’s thinking of you.

In that moment, is there anything better that could happen? That right there is what gives you some perspective and reassurance. That is what pushes you forward and makes you see that you can do anything.

Everything suddenly becomes doable and there’s an almost palpable sense of serenity consuming you.

You have somebody waiting for you, who can’t wait to see you, and that’s all it takes for your man to feel like the luckiest guy on earth.

3. Appreciating a small, yet extremely kind gesture he made for you

You know those days when you don’t know where your head is? You have zero time for housework and picking up the dry-cleaning?

Not to mention walking your dog. Your schedule is just crazy! But at those times, you have your man to lean on.

He gladly takes out the trash, does the house chores, and even walks your dog. He doesn’t even mention it; he does it because he loves you and wants to be there for you.

And when you show him gratitude for helping you out like that, he feels loved and valued.

When you tell him how much you appreciate having him around and helping you like that, it’s priceless to him, and all that he needs to hear, because he’s always got your back and he’s happy you know that!

4. Playing with his hair as he’s driving

You’re on a road trip, there’s music blasting, and you’re laughing at his silly jokes, while running your fingers through his hair. That might seem like nothing, but to him – it’s everything!

I never really realized how much that means to a dude until my boyfriend told me how much he loves it when I’m playing with his hair, especially while we’re in a car and he’s driving.

So ladies, don’t underestimate the subtle power of touch! Your man loves it more than he’s letting on. TRUST me.

5. Tagging him in a cute photo on Facebook (along with the most adorable caption)

Come on… who doesn’t love being bragged about on social media by their significant other?

When you show your love for your man to your entire friend list on Facebook, you’re showing him how much you love him and are proud of having him.

Some people tend to go a bit overboard with their exclamations of love and affection on social media, but as long as you don’t post about him 5 times a week, it’s all good (it’s awesome actually!)

You’re kind of telling the world: “This one’s all mine, I love him to death, and I’m happy to have you all know that!”

6. Actually listening when he’s talking about his fantasy football team

I know you may not be the biggest football fan or know anything about fantasy football… but listening to your man for 5 minutes isn’t really that hard, is it? And it means the world to him!

So when you actually pay attention when he’s going off about it, you’re making him a very happy man.

Having a girl he can talk to about one of his favourite things in the world (after you of course!) is a big turn-on!

You don’t even have to know much about his interests in general, as long as you listen and react appropriately (actually caring), he knows he’s hit the jackpot.