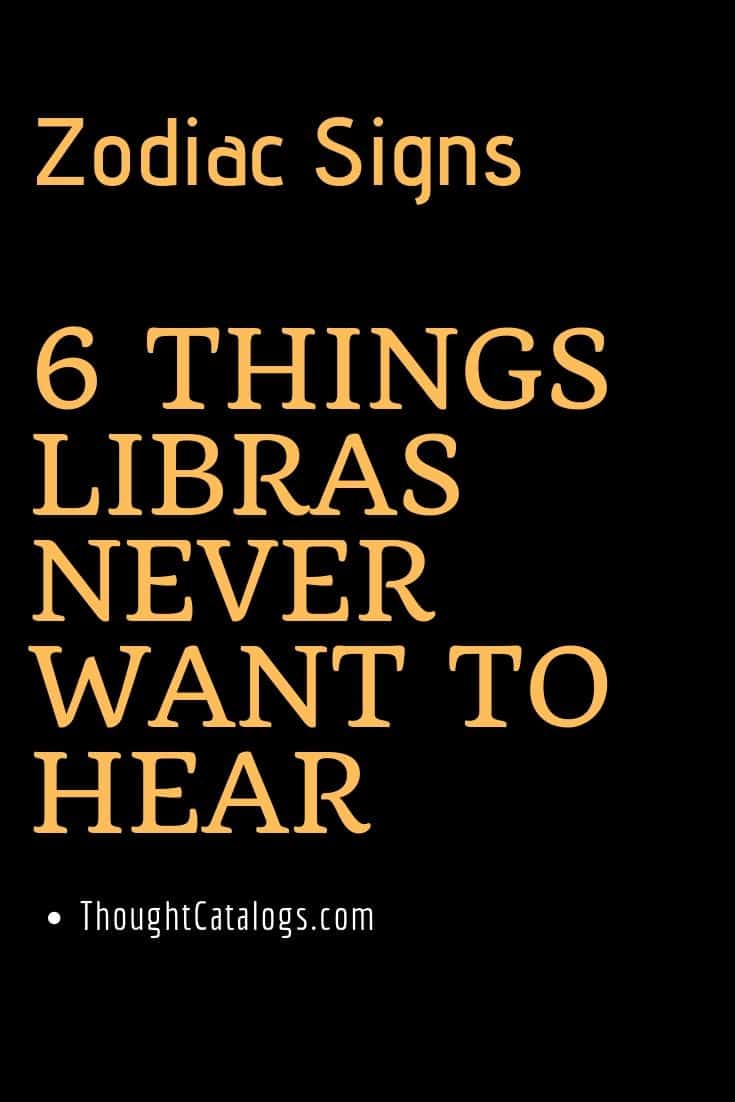 While Libra is known as one of the kindest and most giving signs of the zodiac, they‘re also infamous for being wishy-washy and uncertain.

As helpful as Libra tries to be, there are certain situations they‘ll avoid at all costs. Here are all the things that the sign never wants to hear.

If there‘s one thing fair and balanced Libra hates doing, it‘s picking sides. It‘s stressful enough for them when there‘s a minor disagreement between two friends, but it‘s likely that they‘ll shut down entirely if they‘re given an ultimatum and forced to choose the more deserving party. Chances are that they‘ll eventually stick with whoever didn‘t pressure them into that unenviable situation—or refuse to take part and drop everyone involved.

Libra‘s indecisiveness doesn‘t just apply when it comes to making tough decisions. Their desire to give everyone and everything a fair shot means that making even the most routine choices can be difficult for them. The last thing they want to hear is that their friend group doesn‘t know what food they should grab or what movie they should go see. They‘d probably be happier if someone else would pick something for them every time they were in front of a menu, and they find making decisions especially tricky when other people might be disappointed with their selection.

Libras are a lawful bunch, believing that structures are in place to make things run in a smooth and orderly fashion. Their world views are shaped around the idea that life is just, and the mere suggestion that they can‘t expect fairness is enough to confound them. They usually find that when they put goodness out into the world, it comes right back to them, and they‘d prefer the people in their life at least try to treat others with kindness and consideration.

“That‘s Not What You Said Before.“

Libras tend to make snap decisions when they‘re pressured, and they don‘t often get the chance to carefully consider the options before they do so. In fact, they only fully understand the ramifications of their actions afterward. That‘s precisely why their choices don‘t tend to stick, and they‘re known to change their minds once they‘ve fully thought things through. Even though this is the case, they can‘t stand being called out on it. After all, they didn‘t want to make the initial judgment in the first place.

Libra is happiest in calm and peaceful environments, and they‘ll do whatever it takes to soften conflicts and avoid confrontation altogether. They never want to hear that someone “needs to talk“ because it always means that the atmosphere is going to quickly shift from light and airy to difficult and serious. They‘d rather avoid their problems than address them head-on—often finding that things sort themselves out—and struggle in particular with one-on-one showdowns.

“You Need to Put Yourself First.“

Libra may be the most selfless sign of the zodiac, and they‘re always thinking of other people‘s wants and needs above their own. In fact, they spend so much time working on making other people happy that they all but ignore their own needs. Of course, everyone but them can see it. Whenever they‘re told they need to occasionally put themselves first, they react and disbelief and reject the idea entirely. Funnily enough, someone else usually has to jump in for Libra to initiate any form of self-care.

Stress-Relief Strategy That You Should Try, Based On Your Zodiac Sign

How To Improve Your Flirting Style, According to your Zodiac Sign

Even The Happiest Couples Have Survived A Rough Patch

What Kind Of A Woman You Are, Based On Your Zodiac Sign

40 Effective Tinder Openers All Girls And Guys Fall For

ThoughtCatalogs - June 6, 2020 0
June is here, it’s almost Halloween, and the air is swirling with autumn delights. What are your goals this month? Are you turning to...